The Mondopad from InFocus, an interactive whiteboard and multitouch videoconferencing system, is built on an Intel Core i7-based Windows 10 PC with a snappy 256-gigabyte solid-state hard drive and a gorgeous, 65-inch 1080p capacitive touch-screen display.

It’s essentially a fast, oversized computer, so the learning curve is short. For example, I invited a few students to sideload PowerPoint presentations onto the Mondopad from their USB drives. They were initially confused, but when I said, “Just think of it as a giant computer,” they quickly discovered where to plug in the thumb drives. Within seconds, it was as if they’d been using a Mondopad forever.

Up to the Task of Classroom Collaboration

Because the Mondopad runs on Windows 10, users can launch any Windows-based application, such as Google Hangouts and Skype. The Mondopad’s user interface runs on top of the Windows 10 interface, and instructors can easily switch between the two.

InFocus includes several applications of its own. Large, intuitive icons make it easy to access the whiteboard, make a video call, adjust settings or simply run a presentation.

An advanced videoconferencing camera and a pair of sound bars are the Mondopad’s eyes and voice. The ­high-definition camera, developed for classrooms, includes a viewing angle that’s 70 degrees horizontal and 56 degrees vertical, ideal for distance learning or connecting with remote experts. 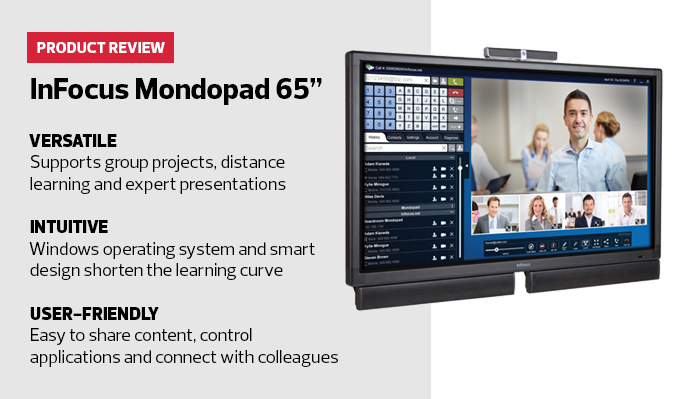 In my test, students in the back of the room had no trouble hearing or being heard, thanks to the external stereo 25-watt speakers and four-mic array.

In the growing field of all-in-one ­collaboration systems, the Mondopad stands out for ease of use, ready integration with other devices and, of course, versatility. For K–12 education users, it’s a tool that can pivot easily among a ­variety of functions.

As any experienced educator knows, a key to classroom management is to get away from the front of the classroom and get out among the students. Thanks to ControlView, a free mobile application from InFocus that enables the instructor’s tablet to mirror the Mondopad screen, I was able to walk around my classroom and control the Mondopad remotely. Note that for this feature to work, the Mondopad and the device it mirrors must be on the same Wi-Fi network.

The Mondopad also supports collaboration with remote colleagues, experts and speakers. In my test, both audience members and presenters engaged easily with the device.

Presenters almost instinctively knew to tap the “next” button on the screen, and audience members seemed to appreciate the detail afforded by such a large display. To further support collaboration, the Mondopad Invite feature lets users share their Mondopad screen with colleagues on other campuses through a virtual private network. This makes it easy to find and connect with other Mondopads on a user’s network, or even send an invitation to collaborate to a Mondopad outside the network.