Six years after embracing cloud computing, the IT team at Indianapolis Public Schools gives the technology solution straight A's because it enables anytime, ­anywhere access on any device.

Students, for example, need just one password to connect to the district's learning management system, where they can review their teachers' lesson plans and submit homework or access free and subscription-based educational websites. Parents, meanwhile, can log in to view their children's work, check attendance and grades, and communicate with teachers via email.

"From a curriculum point of view, providing students with 24/7 access to educational resources is critical to their success," says Director of Information Technology Mike Pope.

IPS is just one of many school districts around the country that has moved to the cloud in recent years. Their reasons for doing so are numerous, as evidenced by the CDW•G 2013 State of the Cloud Report. Based on a summer 2012 survey of 1,242 IT professionals in five vertical markets (including K–12 and higher education), the report found that the cost savings that cloud-based resources and applications can deliver are a significant motivator for adopters. But increased efficiency, improved user mobility and a greater ability to innovate also were cited as important benefits.

Some cloud adopters, like IPS, have implemented a "unified cloud" strategy, which integrates private- and public-cloud deployments, providing users with a ­centralized, web-based dashboard through which they can securely access email and the applications, files and reports they need. The concept has been championed by Stoneware, a software maker acquired by Lenovo last fall. The company's webNetwork unified cloud ­platform is one of the best-known applications for making such streamlining possible.

But numerous vendors — from established players to startups — have developed software that allows IT departments to integrate and manage their public-, private- and hybrid-cloud deployments, says Greg Schulz, founder of StorageIO, a technology advisory and consulting firm that specializes in IT infrastructure optimization. "It's about using a portal or platform to unify or federate your usage of public, private and hybrid clouds," he says of the unified cloud model.

Flavors of the Cloud: Public, Private and Unified

For years, Indianapolis Public Schools students used a learning management system at school but couldn't connect to it from home. Faculty and staff could log in to the system via Citrix and the ­district's virtual private network, but it was expensive and hard to manage, recalls Paul Wheeler, an IPS system administrator.

In 2007, the 60-school district solved these problems by using webNetwork software to build a portal site, called IPS Online, where all 30,000 students, 20,000 parents and 6,000 staff members can access internal cloud resources, such as email, network files, and ­educational and administrative applications.

The top three concerns that are slowing cloud adoption in schools and districts are:

Over time, the IT staff has populated the portal with links to free and subscription-based online reference materials and resources, including dictionaries, ­encyclopedias and educational videos. This school year, IPS has begun ­piloting Google Apps for Education as well.

"It's not just a portal system — it's a single-sign-on solution," IT Supervisor Wayne Hawkins says of IPS Online. "Once users are authenticated, they can use other programs on there, whether we host it or someone outside of the district hosts it."

The NDA portal includes user and shared files that are stored on the school's storage area network, server-based administrative software, and access to applications such as Microsoft Office and Adobe Creative Suite via Microsoft Remote Desktop Services servers.

Minihane favors this approach because he believes a private cloud is more secure and easier to manage. Some­times, users accidentally delete files, for example, and he has to go into the archives to retrieve copies of documents. He couldn't do that, he says, if the school used online ­storage from a public-cloud provider. "It's all the data and programs that we choose to make available," he explains. "With a ­private cloud, we aren't worrying about who has access to it."

School district IT professionals expect to spend 25% of their budget on cloud computing in the first year of adoption.

Cloud Leads the Way to BYOD

Stoneware's cloud solution gives schools the flexibility to support myriad mobile devices as part of their hardware ­strategy, whether it's launching a bring-your-own-device initiative, implementing a one-to-one program or equipping classrooms with mobile computing carts full of tablets, ­netbooks or notebooks.

After deploying Stoneware, Godfrey–Lee Public Schools in Wyoming, Mich., launched a one-to-one notebook program for its students in grades six through eight and a BYOD initiative for its middle and high school students. Both efforts allow students to use the device with which they are most comfortable at both school and home, says Dan Townsend, district media and technology supervisor for the five-school district.

"Our philosophy is that students should be able to go home and use a smartphone or any other device to access district resources with no problem," says Townsend, who makes internal applications, ­public-cloud services and websites available over the district's portal. "We don't have to worry about installing applications on every device at school. We have Stoneware."

A Better Way to Use IT 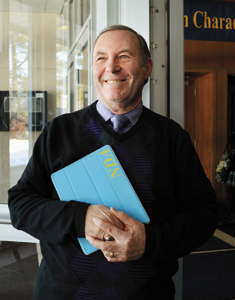 According to the K–12 IT leaders who use it, Stoneware can be installed in a single day and is easy to administer. Users connect to a relay server located in the DMZ ­portion of their network, and then the relay server fetches content from an internal server that's synchronized with Active Directory. "You never access the ­internal network directly," explains Townsend, "so there's no hacking or any ability to inflict harm to our internal network."

Tying applications to the authentication process through Active Directory also improves security because it makes it much more difficult for hackers to hack in, says IPS's Hawkins.

The district runs Stoneware on a 12-node cluster of servers to ensure uptime and a high quality of service, says IPS System Administrator Sean Waddell. "We can take one or two servers down to do an upgrade, and the cluster keeps the environment running," he says. "It also does load balancing for us."

Through Active Directory, the IT staff can tailor access to content based on user group needs, adds IPS's Wheeler. Students are given access to different applications depending on their grade level, and teachers have access to administrative and specific department applications. Special education teachers even have a homegrown app for tracking special-needs students.

According to Townsend, the cloud's biggest benefits are increased IT efficiencies and easier access to resources.

Theresa Rubico Jay, director of technology for Thayer Academy, a private school of nearly 700 students in grades six through 12 in Braintree, Mass., agrees, ­noting that she's seen a big boost in technology ­integration and creativity since building a webNetwork-powered private cloud, called Tiger Cloud, last year. "Faculty members no longer have to juggle multiple passwords and multiple websites," she says. "Bringing it down to one portal makes it much easier. It also gives them mobility, freeing them up to get work done from home if they need to."

As with most technology deployments, cloud implementations are a work in progress. Indianapolis Public Schools' IT department, for example, plans to refresh the look and feel of IPS Online later this year, just to keep it up to date.

So far, Thayer Academy has made users' documents and internal applications, including grading and learning management systems and external ­educational websites, available through Tiger Cloud. Moving forward, Jay will increase the number of applications by serving them up through Microsoft Terminal Services.

76% of K–12 IT leaders say personal use of the cloud has influenced their recommendation to adopt cloud services in their schools; 56%of them say employees' use of cloud applications and mobile devices is making their organization move faster to the cloud.

Notre Dame Academy also took a phased approach to developing its private cloud. During the first year, Minihane focused on providing students and staff members with access to their network files and folders, because that was their greatest need.

Before, students needing access to school files at home had to email the files back and forth to themselves, while teachers and staff used a synchronization tool that moved files from the school network to their notebook computers so they could work from home — a time-consuming task if the files were large. Then, when they returned to school, they had to sync the files with the school network again.

But the cloud has changed everything for the better.

"Staff and students are very pleased with the level of access to resources they now have," Minihane says. "The webNetwork interface is user-friendly, comfortable and ­convenient."

To ensure a successful cloud implementation, IT leaders must first build a well-designed network with plenty of bandwidth and access points, says W. Michael Minihane, director of ­information technology for Notre Dame Academy in Hingham, Mass. "You have to make sure you have the network infrastructure to support the increased number of devices," he explains.

Boosting bandwidth speeds to school buildings also is important, says Dan Townsend, district media and technology supervisor for Godfrey–Lee Public Schools in Wyoming, Mich. He's already increased the district's bandwidth from 10 megabits per ­second to 50Mbps, and plans to double it to 100Mbps this year.

Those who have migrated to the cloud also recommend visiting other schools that are running successful cloud deployments. "That was a huge benefit for us," Townsend says. "Seeing it in action helped us plan. You can pick and choose what you like from each district."