The word classroom may conjure up a certain image: chalkboards, a large desk in the front of the room for the teacher and rows of individual desks.

Increasingly, though, schools are ditching the seating chart in those often claustrophobia-inducing rooms and embracing all parts of the building. Hallways, stairwells and other parts of the school now are becoming places to learn too.

While the impetus was overcrowding — small classrooms, tight hallways, a dark library that had low ceilings and a lack of dedicated athletic spaces — Yorkville did more than just add room, says Technology Director Ryan Adkins.

“The whole goal was to make every space in our building a learning space, whether it was a hallway, a classroom or the locker bays,” he says.

Yorkville’s classrooms now are filled with rolling chairs, maneuverable student desks and the most up-to-date technology, allowing teachers to continuously redesign their classroom space for all types of student ­collaborations and interactive lessons. And when students aren’t in class, they’re still ­collaborating all over the school, including in newly renovated common spaces.

The benefits of collaborative learning have been clear for almost 30 years — the National Education Association cites research from 1989 that shows cooperation leads to higher achievement and productivity and an array of social benefits. But technology, for all its benefits, sometimes can have an ­isolating effect. By making ­collaboration the default mode of learning, schools can activate the advantages of both. 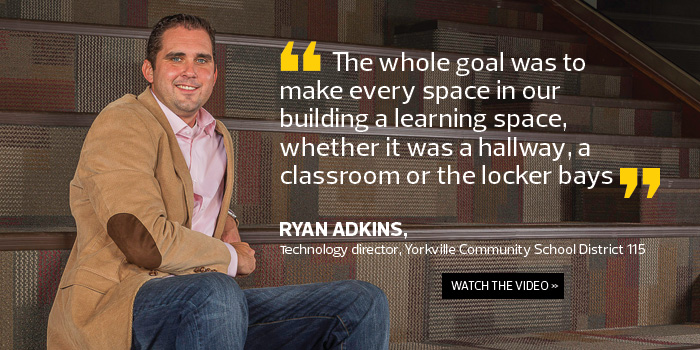 At Yorkville High, one entire wall in each classroom was painted with whiteboard paint to create an oversized marker board for notes, demonstrations and student problem-solving. The hallways were widened from 16 to 25 feet, adding space for lockers and computer bars and “fishbowls” — quiet, glass-enclosed rooms where groups of up to six students can focus and work together.

For teachers, collaborative workspaces were built to house a common area dedicated to each department, places where they can convene and share ideas based on what’s working in their classrooms.

In the second phase of ­renovations, the high school added Learning Stairs — a large, tiered common space that serves as a flexible area for individual classes, large group meetings, media presentations and student social gatherings. The carpeted stairs and adjoining common area are equipped with USB charging stations for students, as well as colorful sofas, end tables and tall work tables to provide a comfortable space to work. Nearby, a bright, high-ceilinged learning center replaced the old-fashioned library. In addition, to align with Project Lead the Way curricula, the district updated STEM classrooms to feature large mobile labs, flexible learning spaces, five 3D printers and a computer numerical control machine. Along the back of the building, a large athletic lobby and weight room were added as well.

The World Economic Forum has stated that we are now living in the Fourth Industrial Revolution; already, the most in-demand occupations did not exist as recently as five or 10 years ago. Changes in primary and ­secondary education reflect the reality that students must be prepared for a future that is still being written.

“Teachers have begun to understand better that there are certain 21st century soft skills that need to be imparted to ­students,” says Lucy Gray, an independent education consultant. “Collaboration, communication and creativity should be a big part of what they’re doing.”

Flexible learning spaces that make the most of a school’s technological resources help facilitate this goal, says Gray.

Yorkville’s renovation embraces an array of technologies to help students gain the skills that will be in demand in the future. Ceiling-mounted Bluetooth speaker systems ensure each student can hear the audio during multimedia presentations, and each classroom’s Epson 97–series ­projector is wirelessly accessible to any teacher. The new fishbowl rooms in the hallways have 42-inch monitors that allow up to four students to easily connect and collaborate across devices, whether they’ve brought their own or are working on one of the 1,700 school-issued Dell Chromebooks that will be rolled out next year. 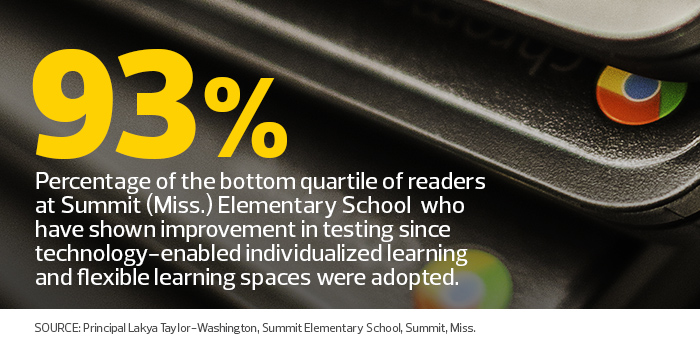 The Learning Stairs are equipped with power and USB charging as well as a large drop-down screen and a 10,000-lumen Epson projector, giving students and teachers another workspace option. At the start of the day, for example, students can gather there to catch the morning news.

The former library, which is now the learning center, offers reconfigurable furnishing that can seat nearly 100, four projection areas, and a wireless microphone system that is housed in the ceiling. Even the athletic lobby has three flat-screen TVs and a drop-down screen; the weight room features additional projection capabilities and Bluetooth audio.

Adkins proudly notes that the community did not have to raise any additional revenue to fund the upgrades. “Everybody thinks you have to spend a lot of money to make something enjoyable and to make it look flashy and neat, but that’s not true,” he says.

Maximizing Tech with One Teacher’s Vision

Not every classroom redesign requires a full-school renovation. Sometimes, change begins when an individual teacher gets support to experiment in a single classroom.

Kayla Delzer was working as a second-grade teacher at Legacy Elementary in West Fargo, N.D., when she found herself wondering why so many people leave their homes to work on their ­computers at coffee shops.

“One day I was at Starbucks, and I looked around and realized a lot of other people also were at Starbucks, and I wondered, what’s going on? Why do we all gather here to get our work done?” she says. Delzer watched her fellow patrons working and realized that one draw (besides the caffeine) was the variety of seating. People in the coffee shop could tuck into a comfy chair with a book, stand or perch at a high bar with their mobile device or notebook computer or gather with —others around a table to work together.

With the blessing of her school principal, Delzer ­re-created that flexibility at school. She dismantled the brand-new but very traditional classroom she’d stepped into and introduced a variety of seating, some of which she built herself out of simple materials such as milk crates. Her colleagues watched what she was doing, and by the end of the semester they had applied for a grant to make flexible seating the standard in every classroom. She’s now helping Mapleton Elementary in Mapleton, N.D., where she teaches third grade, pilot flexible seating ahead of building a new school next year.

Delzer says flexible seating helps teachers maximize the technology they have at their disposal, whether they’re providing space for groups of two collaborating one on one or groups of three to six on a shared device.

Innovation Goes Beyond the Building

At Summit Elementary in Summit, Miss., one of the school’s most innovative learning spaces is on wheels.

The school recently remodeled its traditional classrooms, turning them into high-impact, purposefully built learning labs where a one-to-one tablet initiative supports individualized learning. Then Principal Lakya Taylor-Washington realized she had a problem.

The school had acquired a zSpace STEM Lab, a suite of powerful augmented and virtual reality applications that contain thousands of science lessons. The issue? “There was no space for us to put it in the classroom,” she says.

Taylor-Washington considered various options — building new space, transporting children to a different building, adding a modular classroom — but each was unworkable, given her time frame and budget. Then, a stray comment from the superintendent about a friend who had converted a school bus into an apartment inspired her.

She requested two unused school buses to transform into a lab. With a bit of work, the buses became a futuristic learning space where today, Summit students can experience science in three dimensions. In the bus lab, students use virtual reality to perform electronic plant and animal dissections, learn about human anatomy and explore a volcano, among other things.

“The impact that it’s ­having on engaging our students and changing what they get to experience is profound for me, and it’s probably life-changing for them,” Taylor-Washington says.

Flexible Learning Spaces Are About More than a Makeover

Whether it’s a renovated building, a remixed classroom or a reclaimed laboratory, these schools demonstrate that classroom or school design can fundamentally change the way ­students learn and help ­prepare them for a future that still is taking shape.

“What we’re moving toward is flexible learning environments,” Gray says. “It’s not just the physical space — it’s the mindset, the skills intended to be taught and the physical environment, all combined.”