A tornado decimated Goodman Elementary School in 2017, mangling the roof and strewing cinder blocks, insulation, furniture and other debris.

The destruction of the Goodman, Mo., school forced the temporary relocation of students and school employees, and a subsequent regrouping to continue instruction that inspired the design of a new campus. In August, the Neosho School District opened the new, $12 million Goodman Elementary campus featuring spacious classrooms, open collaboration spaces, a makerspace and mobile devices, interactive displays and flexible furniture throughout.

It’s a stark contrast to the previous building’s traditional classrooms, tables and chairs.

“The tornado had a silver lining, as it gave us a fresh start,” says Samantha Hamilton, principal of Goodman Elementary. “Our new school is focused on student-centered learning. It’s warm and inviting, and there’s a lot of collaboration space. Before the tornado, we were looking into 21st-century learning and flexible-seating options, but the walls were in the way.”

The destruction of Goodman Elementary is one of many examples of schools forced to rally after a natural disaster to ensure teaching and learning continue. The recovery efforts in Neosho and other districts also underscore how technology can support efforts for academic continuity and how classroom design fosters collaborative, engaged learning.

IT departments play a key role in helping school districts recover and rebuild after natural disasters or other catastrophes damage school buildings. They must ensure business continuity, sift through the damage to salvage whatever technology they can, and equip temporary school sites with network connectivity, computers and other technology that teachers and students need, IT leaders say.

IT leaders must also work with school leaders and architects to design new buildings and ensure proper placement of network cabling and electrical outlets for IT needs. IDC analyst Phil Goodwin estimates that only half of organizations have a workplace recovery strategy, such as providing new workspaces, computers, and network and phone services after a disaster. It’s even more complicated for K–12 schools, he says, because students also need books and other learning materials. 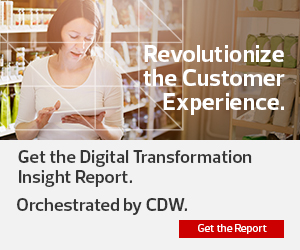 The tornado that destroyed Goodman Elementary touched down at night, after everyone but Custodian Lyndell “Lucky” Ulmer was gone. Ulmer, whose nickname predates the storm, escaped unscathed.

After the storm, Neosho School District moved Goodman’s four grade levels to temporary sites, including a wrestling gym in the central office. Fourth graders relocated to an unused classroom in another district elementary school.

The tornado destroyed more than half of Goodman’s computers and tablets, so Technology Director Scott Harris immediately launched a one-to-one program, purchasing Chromebooks for each third and fourth grader as well as tablets for younger students. District IT staffers installed spare HPE Aruba wireless access points at the temporary locations.

“We just wanted to do what was best for students, and the teachers were quick to adapt,” Harris says.

“Teachers got creative, and it allowed them to see there are other ways to teach,” she says.

District leaders and school faculty saw firsthand the benefits of educating students in spaces with open layouts, such as improved student engagement.

“It was a rough time, but it gave us a chance to try things and figure out who we wanted to be,” Hamilton says.

A New Approach to Teaching

That fall, Neosho seventh graders moved to a new junior high, opening up space in the old middle school building for Goodman’s 350 students to reunite under one roof while their new school was under construction.

Hamilton spearheaded the design of the new building, which is bright and airy with flexible learning spaces that include three collaboration areas with soft benches, ottomans and an outdoor courtyard. Ten of the school’s 15 classrooms have a retractable whiteboard wall in the middle, which teachers can open to convert a smaller room into a larger classroom if they want to combine classes for projects, Hamilton says.

Each classroom features flexible furniture, including wobbly stools at different heights. Each room also has a 75-inch SMART 6000 Series interactive flat-panel display and a PowerGistics tower, a small-footprint shelving system that stores and charges Chromebooks and tablets.

Students use G Suite for Education and other educational applications, including a new math program, that allow teachers to individualize instruction to students with specific assignments or educational videos.

“Teachers rarely lecture,” Hamilton says. “They may give a 15-minute lesson on a targeted skill, then do small-group instruction. We have kids independently working on assignments, but there’s also a lot of creation going on and collaborative projects.”

IT staffers hung 32-inch Samsung displays outside each classroom door to use as digital bulletin boards displaying student work or school announcements. Students can also connect their devices to the displays and work on projects, Hamilton says.

“Teachers are converting much of their curriculum to project-based learning, and they are getting help from the design of the building and the technology we put in these learning spaces,” Harris says.

MORE FROM EDTECH: What school districts need to know about disaster recovery as a service.

The first-floor data center ran on generator power. To get wireless access, IT staffers used a Verizon mobile hotspot, running cable from the data center and up to the fourth floor, where an employee with a notebook computer processed payroll, Shows says.

A month later, Bay District Schools resumed classes, with some schools using portable classrooms and others sharing a campus by implementing a split schedule. At that time, about 90 percent of the district's schools had regained internet connectivity. Verizon donated Cradlepoint routers — which use a cellular connection — to the schools that still lacked access.The district’s 39-person IT staff salvaged computers, interactive whiteboards, wireless APs and switches from the damaged schools. The IT department also purchased 1,000 Chromebooks and 250 hotspots for students and staff to check out, Shows says.

We are a critical piece, like a magnet, helping the community come back together.”

Creating A Magnet For the Community

The Camp Fire, a wildfire that in November 2018 incinerated 153,000 acres of Paradise, Calif., killed 86 people and consumed nearly 14,000 homes. It took firefighters more than two weeks to contain the fire, which also destroyed four of nine schools in the Paradise Unified School District.

The fire spared the district’s central office and data center, but an extended power outage led IT Director Adam Vesely to reach out to the Butte County Office of Education 20 miles away from Paradise’s data center equipment.

It was critical for Paradise administrators and principals to access the student information system, which the VPN allowed them to do remotely, Vesely says.

School districts in nearby Durham and Oroville provided classrooms for Paradise’s elementary schools. For the other grades, Paradise administrators leased storefronts at Chico Mall, relocated the high school to a large office building and moved the junior high to the site of a former hardware store.

The Camp Fire destroyed 600 of the district’s 2,600 Chromebooks, leaving enough devices for the students who returned. Paradise schools’ enrollment dropped by half, to about 1,700 students after the fire, Vesely says.

Paradise reopened its own campuses this school year and now permanently houses its data center in Butte County.

The district has become a unifying force as the community starts to rebuild, Vesely says.

“We are the biggest employer, and one of the few employers left,” he says. “We are a critical piece, like a magnet, helping the community come back together.”