Gather enough educators, school administrators, technologists and IT leaders in one spot, and there’s bound to be collaboration.

Attendees at the ISTE 2016 conference in Denver shared ideas big and small during lectures, workshops and free time spent wandering the exhibition hall floor. But their conversations weren’t confined to halls of the Colorado Convention Center — education experts took to social media to share their insights.

Check out our favorite tweets from the conference, then read more about ISTE 2016 on EdTech’s event coverage page.

If we know students do not read our comments on the side of the paper, why do we think annotating it is so awesome? #ISTE2016

Anyone who thinks that a government agency can't be entrepreneurial doesn't know the @OfficeofEdTech! -Jim Flanagan #ISTE2016 #FutureReady

The BIGGEST risk is NOT taking any at all.  Dont let fear stop you from doing great things #makerspaces #iste2016 pic.twitter.com/AHnXdQNBfl

How many times do we tell kids not to do something online? Often. How often do we tell them to share good? Hardly ever #iste2016gc #iste2016

The notion of "digital citizenship" is so messy. All the more reason educators have to be in on these conversations with students. #ISTE2016

The more ways we teach, the more students we reach. @KleinErin #mathmindset #ISTE2016 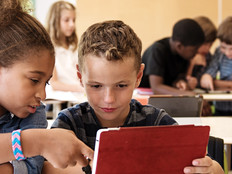