Feleccia Moore-Davis joined Tallahassee Community College in Florida three years ago as provost and vice president, following a 20-year career as a professor and administrator in community colleges in North Carolina and Texas. 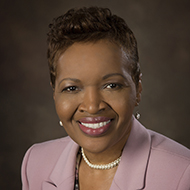 One of her first initiatives at TCC was to adopt an early-alert system that could identify students who may be at risk academically. The goal, she says, is to use this data-driven system to retain students and support them so they can graduate on time.

Moore-Davis recently spoke with EdTech about the evolution of the system, including efforts by TCC leaders to get faculty on board.

Moore-Davis: We started our early-alert journey over 10 years ago. We went through several iterations. We started, for example, focusing on developmental education success and the success of first-time college students. In 2013, through another task force, we decided to launch a new tool. However, our goals for that product were not realized. We had made some missteps. We recognized we did not have full buy-in from our faculty. It was a top-down process. Students also weren’t aware of why flags were on their records. We had coaches calling them, and they didn’t understand why people from the college were calling.

EDTECH: What happened next?

Moore-Davis: We knew we needed to reboot. What we were doing wasn’t working, yet we were spending approximately $85,000 on a software tool. We believed in the premise of early alert, so in 2017 we relaunched. This time we created a student success task force made up of faculty, staff and advisers that researched early-alert systems and what would work for us.

EDTECH: What was the result?

Moore-Davis: We realized we could meet our goals using a system we already had. We re-envisioned it through the ticketing system we use for the call center and IT. It really was an opportunity to maximize the resources and the talent that we have at TCC to create a system that people would buy into but also would work for our students.

EDTECH: How were you able to get that buy-in the second time around?

Moore-Davis: Definitely communication. We do so many things that sometimes we forget the basic thing, which is communication. For the early alert to work, the faculty would need to be the first responders. That was the key for us. They are spending more time with our students than our advisers. They are seeing what is happening to our students in and out of the classroom.

We also looked at why flags were being raised for students. By reviewing the data, the task force came up with categories for student interventions. So, we ended up with four or five categories of interventions, including academic tutoring, financial aid, pathways coaches who assist with life challenges, counseling referrals and academic advising.

EDTECH: Have outcomes for students improved under the relaunched system?

Moore-Davis: In the fall, we resolved about 75 percent of the cases, which had not occurred before. Our institutional effectiveness team is now looking at correlations between those resolutions and our student retention rates, specifically. The early alert is geared toward keeping students in class and progressing forward.

EDTECH: What lessons learned would you share with other colleges?

Moore-Davis: One of the things we learned was to maximize our faculty and institutional talent. Faculty are the heart of our early-alert system. You can’t talk about student success without engaging your faculty in some way. We were able to utilize talents of faculty, IT, and academic and student affairs to create a better system. Many of our students were at risk of failure. That was the beauty of what we created, because it was a village that had to come together to help our students progress. I’m hopeful, based on what I’ve seen so far, that it will work for us.