When Harbor Beach High School was built five decades ago, the library was a hub of student activity, but in recent years, it had become a veritable ghost town.

The space was unappealing and out of date: Books lined the walls on worn-out wooden bookshelves. Old desktop computers on mismatched tables dominated the room. It also had no Wi-Fi, no study spaces and, often, no students.

“It was sparingly used and not effective,” recalls Shawn Bishop, superintendent of Harbor Beach Community Schools in Michigan. “Students would never say, ‘I have work to do. I’ve got to use the library.’ If a teacher needed them to do research, they would take them there, and as soon as they could, the students would leave.”

To make sure students used the new space, Bishop asked them for design feedback, and today, the room buzzes with students and classroom activity. “It’s a coffeehouse feel, warm and inviting,” he says.

An increasing number of school districts have begun building modern learning environments to help facilitate a transition to new pedagogies, such as personalized, project-based learning.

Some districts are renovating one room or one school at a time, while others are building entirely new campuses. They are hiring architects to design these modern spaces, but they can also count on furniture companies that have researched educational space design to assist with design renderings.

Whatever the project’s size, it’s important to include all relevant stakeholders during the design process, including the IT and facilities departments, school administrators, faculty and students, experts say.

“Have focus sessions with faculty and bring students in to have discussions before you change a room. They should be part of the solution,” says Susan Metros, founder and principal of Metros Consulting. “You want them to feel comfortable in those classrooms.”

MORE FROM EDTECH: Read more on how modern learning environtments are opening the door to new teaching styles!

The First Step Toward a Modern Learning Environment Is a Blueprint

When Bishop became Harbor Beach’s superintendent in mid-2017, he met with faculty and staff to discuss the needs of the 600-student, three-school district, and they overwhelmingly told him the priority was school building improvements, including a new high school library media center.

Before launching the project, he understood that what worked for libraries in the 20th century no longer worked in 2018. He knew that, instead of using books, students today do research online and needed a state-of-the-art space to do their homework and to debate and collaborate with classmates. He also knew he needed help with the remodel.

As he pondered what to do, he received a flyer from technology solutions provider CDW•G touting a new classroom design service, called Blueprint to Design.

It offered a two-hour consultation with an educational strategist; once a school delivered a blueprint or floor plan of the room, a school design engineer would create a design and provide detailed color renderings.

“It was an omen, or dumb luck,” recalls Bishop, who immediately called CDW•G to discuss his goals and vision for the library. He sketched out a simple design on paper and detailed a list of wants for the 54-by-88-foot space. “We wanted a space for kids to use during the day, but flexible enough to hold school board meetings at night,” he says. “We wanted furniture that could be rearranged for different needs, but durable enough to last.”

After receiving Bishop’s sketch, a designer quickly produced an initial rendering for the district to review, with recommendations on fabric choices and flexible furniture.

That kicked off four months of planning and internal discussions at the ­district and with the CDW•G design team. Bishop invited student council members and the principal to take part in design review sessions.

Each time, the team took their feedback to develop new renderings. “We had joint conference calls. The kids talked to the designers and asked questions,” Bishop recalls. “We went back and forth on different aspects of the room and came up with the colors, furniture styles and technology pieces we liked.”

After four rounds, Bishop finalized a design. Within two months, in early 2018, the new library media center opened. Students can study individually on oversized armchairs or collaborate with classmates in booths, or on bistro tables or square tables that can be pushed together.

The district purchased a cart of 32 Lenovo 2-in-1 convertible notebook computers and two 75-inch interactive HDTVs. Students can connect the ­notebooks to the HDTVs to make ­presentations, he says.

The district IT staff also installed a wireless access point to ensure the room had strong Wi-Fi and purchased several table-height charging stations with power outlets and USB ports, so students can charge their mobile devices.

The renovation has worked: The library media center is busy and full of students every day.

In January, Rochester City School District in New York built a modern classroom on the second floor of its administrative building to give students, faculty, staff and the community a sneak peek at the types of classrooms it plans to build in the future.

But the room also serves to educate outside architects on what the district wants as it renovates each campus.

“We wanted to create a sample modern learning environment to show what we wanted our classrooms to look like,” says RCSD CIO Annmarie Lehner. “It’s also a space for teachers to bring their students in to see how they like it, so they understand what will be coming into their schools.”

The combination of an ongoing state-funded program to modernize and ­renovate school buildings and a recent voter-approved state bond to improve technology access has paved the way for Rochester to create modern learning environments at its 50 schools.

That includes beefing up Wi-Fi and equipping every child with a Chromebook, says Glen VanDerwater, executive director of instructional technology for the district.

The Information Management and Technology Department and other district leaders recently created a standard classroom specification that they want architects to follow as they renovate each school. That includes creating sections of flexible, movable furniture, so students can roam around and collaborate.

VIDEO: See what kind of materials are available to build the ideal modern learning environment!

Feedback Is Crucial to Perfect a Modern Classroom

In late January, the district completed its modern classroom in the ­central office and began hosting classes. The glass-enclosed room bursts with vibrant colors, and desks and chairs of all shapes and sizes, from green hardback chairs to blue stools.

Each desk has a top that doubles as a dry-erase board, allowing students to sketch or jot notes as they work. The room also features a cart of 30 Chromebooks, fast Cisco Wi-Fi, a Makerbot Replicator 3D printer, table-level charging stations and two large Triumph interactive panels, says Sheldon Cox, the district’s lead instructional technology teacher.

RCSD took advantage of the Blueprint to Design service to configure the space. CDW•G drew up several renderings based on feedback from staff, faculty and students.

“The renderings were a huge piece of the process and gave us a sense of what the room would look like and how the furniture would fit,” Cox says. 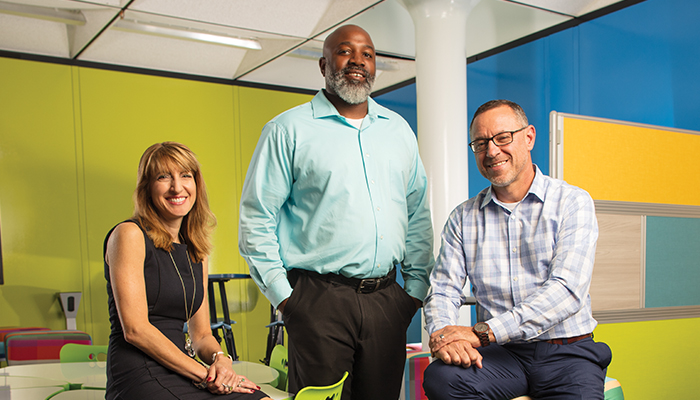 Student feedback was critical. In fact, before working on the central office classroom, the district last year collaborated with furniture makers and organized a community event, allowing students and their parents to try out furniture and give their opinions, he says.

As each school gets renovated, the district’s goal is for students to return to a campus with modern learning spaces. In the meantime, students and teachers rave about the modern classroom in the central office.

“It’s been resoundingly positive. Kids are excited to be there,” VanDerwater says.

Five years ago, at Greenville County (S.C.) Schools, J.L. Mann High School launched a new “school within a school,” called NewTech@Mann, that employs a project-based curriculum. As part of the effort, the district recently built a two-story, 54,000-square-foot addition to the campus.

While developing the program, Assistant Principal Cindy Alsip visited schools in a handful of states. She took note of building design elements that she wanted to emulate, including flexible classrooms with movable, writable walls and collaboration spaces.

She then met with an outside architect and a civil engineer from the district’s facilities department to explain her vision of modern learning environments. For about a year and a half, they went through several architectural drafts.

When the new wing opened last school year, it embodied everything Alsip wanted, from natural lighting to ­glass-walled classrooms that open into common learning areas.

Classrooms have a retractable wall in the middle, allowing teachers to turn two rooms into one large classroom. To ensure maximum flexibility, every desk and chair has casters, so students and teachers can easily reconfigure the rooms, she says.

By creating open, flexible spaces, Alsip believes the district has future-proofed the school for years to come. “We knew what we put in place could be used today, hoping that the more flexibility we physically put in the classrooms, the more options we can have in the future,” she says.