For districts looking to upgrade communications systems, it’s no longer a question of whether to adopt an IP-based phone system, but rather which one to deploy. The advantages they provide — ease of mass notifications, the ability to deliver video as well as voice, greater redundancy and reliability — are simply too compelling to ignore.

But for many budget-strapped districts, the deciding factor frequently comes down to cost. For example, last year Monterey Peninsula Unified School District in Northern California deployed a new solution from Jive Communications.

The primary driver for the update was a change in how the ­systems are funded, says Manuel Zamudio, IT director for the district, which serves more than 10,000 students across 24 sites.

Because the district’s phone system used Primary Rate Interface voice lines, it would no longer qualify for federal assistance by the end of 2019 due to changes in the FCC’s E-rate program. Monterey Peninsula needed a cost-­effective solution, and fast.

“The district had to pay full price for new lines, so cost was an important ­factor,” says Zamudio. “The second was reliability. Jive met all our r­equirements for price, ­reliability and future focus, and they were able to ­complete our entire VoIP switchover in a couple of months.”

The company offered discounted rates on low-use lines, like those found inside classrooms, and provided more than 1,000 new handsets at no charge, Zamudio says. All told, moving to Jive slashed the district’s telecom budget by 20 to 25 percent.

“Parents didn’t even know the systems were down,” he says. “If we’re ever in a situation where a site no longer functions, we can plug the phones into the network from a new location. As long as there’s an internet connection, they function as if they were in the office.”

MORE FROM EDTECH:  See how schools are adopting remote learning best practices to teach during snowdays.

Besides reliability and cost, enhanced communication and collaboration tend to be the key reasons why districts adopt IP-based voice solutions, says Blair Pleasant, president and principal analyst for COMMfusion, a research and consulting firm.

“Unified communications systems make it easier for schools to interact with families and staff, as well as communicate between different campuses within a district,” she says.

The systems are full of ­features that don’t come with traditional phones, such as presence technology, which allows callers to see whether someone is available before they dial, or video ­capabilities that allow sick or disabled students to attend class remotely.

Another top reason for adoption is that IP phone systems make schools safer by making it easier for districts to send out mass notifications during school lockdowns, and they offer teachers a way to quickly call for help during dangerous situations.

Here in Texas, we have some very large high schools, so it’s important to know not only someone’s address but also their location within a building. "

Enhanced safety was one of the main benefits sought by Grapevine-Colleyville Independent School District, CTO Kyle Berger says. Located just beyond the Dallas-Fort Worth airport, the district supports more than 14,000 students on 20 campuses.

The district upgraded its existing Cisco Voice platform two years ago, putting phones in every classroom as well as throughout each facility.

“With today’s need for safety and security, having a phone in every ­classroom is key,” Berger says. “In emergency situations, we can send a message to every teacher’s phone ­display. And if the overhead speakers aren’t working, it acts as a backup to our paging system, ­allowing us to send announcements through each phone.”

“Here in Texas, we have some very large high schools, so it’s important to know not only someone’s address but also their location within a building,” he says. “If I’m calling from the gym, the system lets responders know where the closest entrance is or what room I’m in, because time is critical in those types of situations.”

PRODUCT REVIEW: Scale up collaboration with the InFocus Mondopad.

The first decision districts need to make when it comes to IP-based phones is whether they should deploy a solution on-premises or in the cloud, Pleasant says.

They also should think about what they want from their ­communications system — whether that’s mass notification capabilities or better collaboration — and look for products that meet those specifications.

Any decisions should also involve all of a district’s stakeholders, says Jennifer Dericco, public information officer for Santa Clara (Calif.) Unified School District. In 2016, the district adopted a cloud-based solution, RingCentral, for use by its 2,400 staff and faculty members.“

Percentage of schools for which creating a safe ­environment is the top communications priority; only 25 ­percent report that they’ve done so.

You want to seek people’s input through focus groups and surveys, and include representatives from all stakeholders on the planning team,” Dericco says. “We try to ensure that everyone’s needs and perspectives are considered in order to have a smooth and positive transition.”

Districts that look to incorporate video may also need to increase bandwidth. IT should also budget money for training, to get staff and faculty up to speed on all the features of any new system. And because IP phones represent another vector for potential cyber­attacks, IT teams need to be more ­mindful of inherent security issues.

Finally, the wide range of vendors and pricing plans can feel overwhelming, Monterey Peninsula’s Zamudio says. It pays to take your time and carefully consider total cost of ownership.

“There may be vendors that provide better pricing up front, but you really need to look at overall costs,” he says. “You might be saving in the short term, but how much is this project really going to cost you in the long run?” 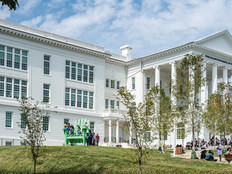