Virtual and blended learning schools continue to crop up across the country, despite poor performance, a new report states.

Released by the National Education Policy Center (NEPC), the Virtual Schools Report 2016: Directory and Performance Review sheds light on full-time virtual schools that offer instruction solely over the internet, as well as blended schools that mix face-to-face and virtual instruction.

The NEPC data indicates that more parents now trust these nontraditional schools with their children’s education. According to the 2016 and 2014 editions of the report, enrollment in full-time virtual schools jumped by almost 8 percent (19,000 students) between the 2012-2013 school year and the 2013-2014 school year; during that same time period, the number of full-time virtual schools rose even more significantly, at more than 32 percent (109 schools). 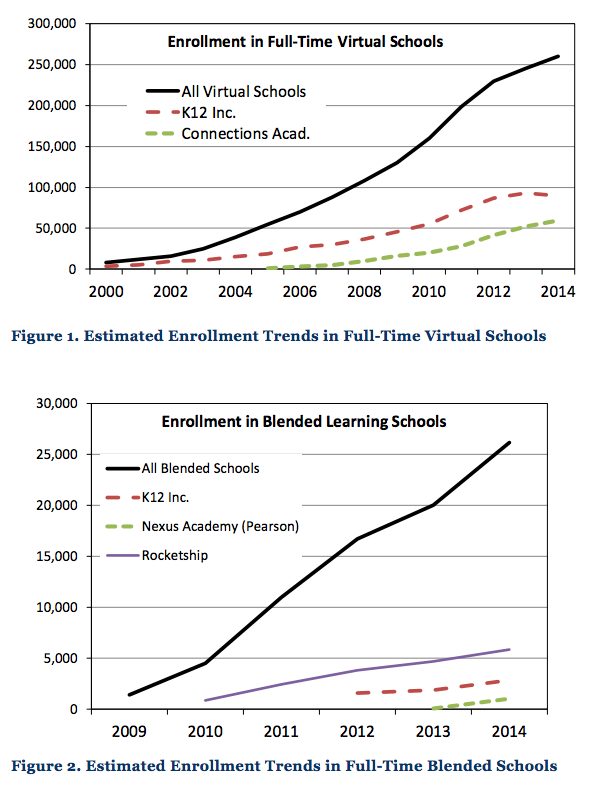 In spite of the strong growth, the NEPC report paints a bleak portrait of the K–12 online education industry:

Multiple or expanded measures of school performance reveal that virtual school outcomes continued to lag significantly behind that of traditional brick-and-mortar schools. Blended schools tended to score even lower on performance measures than virtual schools, although this may be influenced by the fact that blended schools serve substantially more low-income students.

Smaller virtual schools, such as those run by districts or nonprofit education management organizations, tended to perform better, but the NEPC report states that additional research is necessary to understand what causes those exceptions.

“More research is also needed to increase understanding of the inner workings of virtual and blended schools, including such factors as the curriculum and the nature of student-teacher interactions,” the report adds. “Such research should help identify and remedy features that are negatively affecting student learning.”