Fourth-grader Olivia Heinen keeps up with her class and assignments by using telepresence technology set up by Oostburg (Wis.) School District IT Manager Lucas Allen.

When a child is diagnosed with cancer, there are a thousand things to worry about. One of Chad and Beth Heinen’s myriad concerns following their daughter’s myelodysplastic syndrome (MDS) diagnosis was how Olivia, a fourth grader, would keep up with school work.

In Olivia’s case, MDS (a bone marrow disorder) would have led to acute myeloid leukemia without aggressive treatment. Her doctors arranged quickly for a bone marrow transplant.

“With a transplant, the immune system is really compromised,” Chad Heinen says. “She isn’t able to attend fourth grade at all.”

Looking for options, the parents reached out to Oostburg School District in Oostburg, Wis., to find out how they could keep Olivia’s education on track.

Virtually Present in the Classroom

When the Heinen family spoke to Olivia’s principal, they learned that the district had telepresence technology in place thanks to a grant from the Wisconsin Technology Initiative. The district provides two Cisco TelePresence System SX20 units on mobile carts, as well as a Cisco TelePresence MX700 video conferencing kit installed in a boardroom-type space. The family worked with the district’s IT manager, Lucas Allen, to give Olivia real-time, on-demand access to her classroom, both during her three- to four-week hospital stay in Milwaukee and, later, during her long recovery at home.

“On good days, she would log on, and she could see the class and participate,” Heinen says.

“Now that we’re at home, she’s logging on every day for the major classes — math, reading, writing, science and social studies — and she is able to participate with the class.”

Jill Buban, senior director of the Online Learning Consortium, says helping students to avoid absences represents one of the best uses of telepresence technology within the K–12 setting.

“It’s a great supplement that can be used for snow days, or if a student gets sick,” Buban says. “There are so many opportunities to log on, get some work done, and keep up with class, so that absences aren’t affecting the student’s learning as much as they would have five years ago.”

While a tutor could also provide the required hours for instruction and keep a student on track, there are drawbacks. “There’s no social integration; there’s no real sense of place with the school or the classroom,” Buban says.

Technology that allows students to attend classes virtually represents a new realm of possibility. Heinen says that Olivia’s medical team had not yet seen such remote access to a patient’s classroom.

The Many Uses of Telepresence

Helping Olivia stay engaged in her classwork as she recovers at home is just one way that Oostburg School District puts telepresence technology to work, Allen says.

Getting Olivia online required providing her with a notebook, pushing a mobile unit into her classroom, plugging it in to a power source and connecting to the network. The district had already used the technology for professional development purposes, such as demonstrating classroom techniques to colleagues at other schools.

“We let them observe, and then we host a Q and A session after,” he says.

Other uses have run the gamut, from third-graders virtually visiting their pen pals in a Mexican school to facilitating remote attendance for a board member at the district’s annual meeting. Students also can take courses offered elsewhere without leaving campus.

“It’s nothing new, but the quality of it is just so impressive,” Allen says. “It gives you a sense of being there.”

A new type of school in Colorado is a prime example of how telepresence may be used in future education models. Branson School Online, a public K–12 online school, launched in 2001 to address the problem of students having to travel long distances — up to 100 miles — to the school building in Branson. About 480 students — nearly 95 percent of the district’s K–12 population — are enrolled in the program, and most faculty members work remotely as well.

The school provides a notebook with an integrated webcam, reimbursement for Internet access and an assigned teacher for each student. In 2004, the program implemented Citrix GoToMeeting so that students and teachers could share screens and audio conference. Teachers also use HDFaces video conferencing, an integrated feature of GoToMeeting.

“The ability to share the screen is just wonderful,” says Summiya Miya Mahdi, director of technology and communication. “Our teachers use GoToMeeting for direct instruction, such as working together on a math problem, reviewing an assignment or explaining a diagram. At other times, the teacher meets with the entire class or a group.”

One example she cites is field trips. While it would be cost-prohibitive for most schools to visit the San Diego Zoo or Colonial Williamsburg in Virginia, both offer excellent virtual experiences.

Educators can ask, “How am I bringing my students outside of the classroom, outside of their community, and connecting to others through telecommunications technology?” Buban says. Districts should also consider asynchronous options, she says, whether that means posting assignments to a learning management system or an internal website, or taking advantage of low- or no-cost enrichment activities online.

Whatever options schools explore, it’s important for officials to maintain focus on the primary challenge for remote learning at the K–12 level: access. And while access to hardware can be solved by issuing mobile devices, the other side of the coin represents a trickier issue.

“You’ll see the same struggle in rural and urban areas: Either it’s the cost, or they simply cannot get the Internet access,” Buban says.

While Internet access is less of a problem for in-class uses, it must be considered in cases where there’s an expectation for large groups of students to log on for class or complete homework remotely.

Brokopp says telepresence offers a way to ensure students are provided opportunities beyond what a smaller district could traditionally furnish.

“It is a way for rural schools to sustain very high levels of education,” he says. “We really believe what we are doing is a model for sustainable rural education.”

Together with leaders in the school districts in Albany and Juda, Wis., and supported by a grant from the Wisconsin Technology Initiative, Monticello has grown a network of schools that pool their resources to give students an ever-widening range of courses from which to select.

One of Brokopp’s favorite things about the Cisco technology is the way it almost disappears.

Telepresence isn’t the only technology that helps students learn from afar.

Beverly High School in Massachusetts started the 2015–2016 school year in a brand-new way, Principal Sean Gallagher says. Traditionally, the first day was reserved for a freshman orientation, led by a selected group of upperclassmen who helped newer students get their feet under them before the rest of the student body arrived for the second day.

Gallagher was dismayed to learn that the state would not consider the orientation day as counting toward the required 180 days of classes. Determined to find a way to preserve freshman orientation, Gallagher struck upon the idea of having the sophomores, juniors and seniors not participating in the program attend school virtually.

Gallagher sought and received approval from the state to run the program using a cloud-based solution. Students were expected to log in and complete assignments from the guidance department, as well as submit their summer reading and write a reflective essay.

Unlike a telepresence option, Beverly’s program was asynchronous. The school already has a one-to-one, lease-to-own notebook initiative in place, and the school was open for students who needed to come to campus to get online. Students who completed their assignments by a specified time were counted as present for the day.

“It was a pilot for us, in the future, of having the ability down the road to expand on the possibilities of a virtual day for kids,” Gallagher says.

One of the possibilities Gallagher is excited about is overcoming the tough Massachusetts winters. Last year, the school had so many snow days to make up that classes did not conclude until nearly the end of June.

But Gallagher sees the high school’s experiment as more than just a way to chalk up another day toward the 180 days of education Beverly owes its students yearly. In using remote learning as a part of the curriculum, the school also prepares students for their futures.

“We’re seeing opportunities through the use of this technology to enhance 21st-century learning skills for our kids,” Gallagher says. 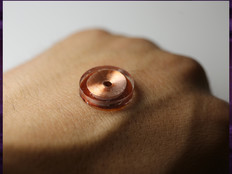 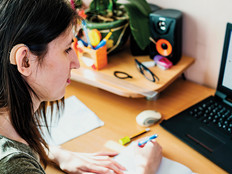 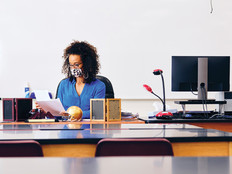