There was a time when just being able to tuck your notebook under your arm and take it with you was considered revolu­tionary. These days, students and teachers expect their notebooks to do more than just travel well. Educators rely on the hardware to perform all manner of chores, from running in-class applications and multimedia to conducting lab work.

Lenovo’s ThinkPad Yoga 11e physically transforms — literally bends over backward — to adapt to changing learning environments. Armed with a touch-screen display and built-in keyboard, the versatile notebook functions as both a tablet and a conventional notebook. A special tent mode enables students to prop the machines up on their desks to watch video and perform other interactive tasks.

The notebook’s versatility isn’t limited to its modular form factor. In keeping with the spirit of Lenovo’s series of notebooks for education, the Yoga 11e offers a capable processor at a reasonable price, with a rugged design built to withstand the hustle and bustle of classroom use.

At 3.3 pounds, including its four-cell battery, the Yoga 11e is a true ultraportable device. Its versatile 11.6-inch touch screen boasts a 1366x768 high-definition display. The screen is equipped with a special coating that reduces glare and is particularly useful in classrooms with fluorescent overhead lighting.

The touch screen is highly responsive, and its modest 1.83-gigahertz Celeron N2930 processor packs enough processing punch to perform most education tasks. Disk access is quick, thanks to its capable 128-gigabyte solid-state drive.

Battery power is ample. The standard four-cell battery lasted five hours and 10 minutes in a worst-case-scenario test (with a movie playing and all power-saving features disabled). The manufacturer estimates the battery will last 6.5 hours with normal use, enough time to accommodate a typical school day.

The notebook also includes several ports for connecting peripherals, including a USB 3.0, a powered USB 2.0, an HDMI, a 4-in-1 card reader and a network port.

Overall, the Lenovo ThinkPad Yoga 11e offers reasonable performance and plenty of options in a rugged, flexible package, making it a good fit for most educational environments. 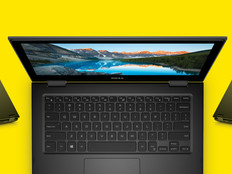