Computer Science Education Week kicked off on Monday, and December has already been filled with events encouraging students to immerse themselves in the world of computer programming.

For example, Monday is also the start of Code.org’s second annual Hour of Code, a week-long worldwide event designed to demystify programming by exposing students to a one-hour introduction to the basics of computer science.

Code.org is a nonprofit organization dedicated to expanding student participation in computer science studies. In 2013, more than 15 million students participated in its Hour of Code instruction. Hadi Partovi, Code.org's co-founder and CEO, has set an ambitious goal of reaching 100 million students during this year’s event. As of Dec. 8, over 56 million students had signed up.

Code.org set up a $5 million crowdfunding campaign on Indiegogo.com to expand the availability of its online programming tutorials in schools across the country. The fundraiser will end Dec. 14, and this week's Hour of Code event is serving as its last big push.

More than 77,000 Hour of Code events are scheduled around the world, according to the event’s website. More than 100 companies, including Amazon, Google and Microsoft, have partnered with Code.org for this year's event.

Hour of Code organizers also used the two sisters from Disney’s Frozen to help spread the word about the event. Frozen characters Anna and Elsa are featured in a November programming tutorial that guides students through the process of creating ice fractals by using basic coding techniques.

But December's coding events don't stop with Hour of Code.

On Dec. 2, Google launched a Holiday Lights project that allows kids to animate lights on the trees of President’s Park in Washington, D.C. The project is part of Google's Made with Code initiative, which is designed to spark interest in coding among middle school and high school girls.

Through the website, a graphical interface allows users to program a unique sequence of lights that will be incorporated into the tree's lighting pattern. An animated image of the custom light sequence can be downloaded once the design is completed.

The full lighting sequence was unveiled Dec. 4, during the National Christmas Tree Lighting Ceremony, and new entries will appear throughout the month. During the ceremony, President Barack Obama thanked the students who participated in the event, calling their creations "incredible."

On Dec. 2, Flocabulary, an online repository of educational hip-hop songs and videos for K–12 students, posted a video that reviews the top 10 reasons kids should consider taking up coding.

Flocabulary's video also touches on the gender gap in programming. Google released the results of a study showing that women make up only 17 percent of the company’s tech-related workforce.

It's a finding that appears to span the entire tech industry. Google's Made with Code initiative is one effort being made to change that, as is Microsoft’s Big Dream Movement, created to attract more girls to careers in science, technology, engineering and mathematics. 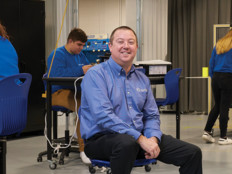