A new infographic from Mobile Future, a Washington, D.C.-based nonprofit, paints a picture of how these devices have become an embedded part of the classroom experience. The graphic, titled “Edtech + Mobile = Learning,” states that in one algebra course, a larger percentage of students who used tablets scored as proficient or better than did those who used textbooks.

There’s further evidence of this trend from students at Archbishop Stepinac High School in White Plains, N.Y., who are in their second year of schooling in an all-digital learning environment. The school did away with paper textbooks in 2013, instead adopting tablets and a digital library. Since the shift, some students told CBS News their grades have improved.

The mobile movement also appears to have the support of educators, with 81 percent of teachers saying tablets "enrich classroom education," according to a report finding referenced in the graphic.

"With mobile devices and apps now front and center in the American consciousness, our nation’s community of learners has enthusiastically embraced mobile technologies as an on-ramp to untold educational opportunities and enhanced learning environments," according to a news release from Mobile Future accompanying the infographic. 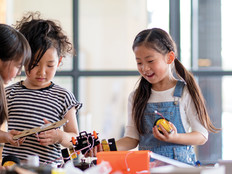