Interest in computer science is booming, and new and inventive ways of getting kids to learn how to program are appearing every day.

Research firm Gartner predicted in 2012 that the computer science field would create 4.4 million new IT jobs worldwide by 2015. Classrooms across the country are racing to meet that demand. Chicago Public Schools is preparing to make computer science part of its system’s core curriculum, introducing courses at area high schools over the next three years, and in kindergarten through eighth grade within five years.

Going beyond the classroom, there are a variety of ways students can try their hand at programming, including free online course websites, such as Codecademy, and instructional videos on YouTube.

But Jay Silver created a hands-on way of getting into the headspace of programming with the Makey Makey, a device that straddles the line between art and engineering. Essentially, it is a programmable circuit board that connects everyday objects, like bananas, with devices, allowing for some creative inputs.

Silver, the CEO and founder of Makey Makey, crowdfunded his big idea through Kickstarter in 2012, pulling in $568,106 — blowing away his initial $25,000 funding goal. The device was released later that year and has been inspiring kids ever since.

EdTech spoke with Silver recently to discover how Makey Makey is helping kids learn the building blocks of programming. 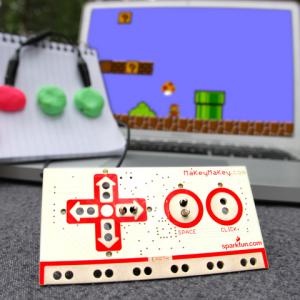 The Kickstarter site for Makey Makey generated $568,106 in donations — blowing away its initial funding goal of $25,000.

EDTECH: Could you briefly explain how your device works and how it's helping kids get into coding?

SILVER: If someone wants to go into the house of learning to code, it's nice to have a simple front door to walk through without too many steps to climb on the way in.

To do this sensing, we use something called "high resistance sensing," which means we can detect a closed circuit of 20 megaohms or above, so we can sense things like leaves, dirt and kitty cats.

EDTECH: Interest in computer science has really taken off in the past few years. Why do you think coding has become so important in education?

SILVER: Coding is part of our environment now, which makes it relevant. Who cares about coding if there are no computers? There are now way more computers than there are people.

It's like learning to read: Almost no one would learn to read if there weren't books, signs, pencils, web pages with text and basically hundreds of relevant reasons to want to read presented each and every day.

Code is now relevant because a "literature" and "culture" is emerging around it, and therefore it is interesting and inherently valuable. Not everyone has to be a professional writer, but everyone needs to know how to write a note or an email. Similarly, not everyone needs to make a living at coding, but everyone needs a basic understanding of how to do some simple coding so they can understand the world they live in and be engaged agents who have independence and self-determination.

EDTECH: Your work involves a lot of creativity, but some see coding as a very mechanical process. Could you shed any light on that myth?

SILVER: I don't think coding was ever without creative thought. It's only that we used to have to speak "machine language" in order for machines to understand us. Now computers can speak our language more and more. Is being a carpenter or a lawyer a mechanical process? There are hard parts that require lots of work — sometimes even repetitive work — to any job, or even a hobby or sport.

Take a look at Scratch, Design Blocks, Processing, Turtle Paint and other modern languages. I personally think these languages are really fun. But everyone's different, so do what you like.

EDTECH: At what age do you think kids should get involved with coding?

SILVER: It just depends on the person. As with anyone and any topic, whenever they show an interest, that's the exact, perfect time.