The cost of subsidizing hardware to connect 99 percent of students at public K–12 schools could reach $3.2 billion, according to a new report from two educational nonprofit organizations.

The federal and state governments are stretching to meet President Barack Obama's goal of connecting 99 percent of students to high-speed Internet by 2018 through the initiative known as ConnectED.

ConnectED's mission is to ensure that these schools have a ubiquitous wireless network, capable of supporting a one-to-one digital learning environment. The barriers to that goal are bandwidth availability and existing school infrastructure.

Until now, the cost of the venture has been either tightly guarded or simply not known, according to a new report from the Consortium for School Networking (CoSN) and EducationSuperHighway.

"There has been little data entered into the public record on the amount of funding actually required to ensure that every school and library has the LAN, Wi-Fi and WAN equipment it needs," the report says.

Upgrading existing school networks with equipment to meet the goal will cost approximately $2.9 billion in federal E-Rate subsidies over the next four years, with an additional $500 million needed for libraries, for a total of $3.2 billion, according to the report.

The FCC's E-Rate program (officially called the Universal Service Schools and Libraries Program) provides discounts on telecommunications equipment for schools and libraries to help close the technology gap. The program's annual budget is set at $2.25 billion, and the FCC is in the process of re-examining how that money is spent.

To arrive at the average price schools in need would face to upgrade their networks, estimates were made based on surveys that CoSN conducted with education technology leaders and a cost model developed for each needed component.

The organizations estimate that 57 percent of elementary schools and 64 percent of secondary schools are fully connected to wireless Internet. That leaves a wide margin for which the goals of ConnectED remain out of reach.

Based on these findings, CoSN and EducationSuperHighway recommend that the FCC expand E-Rate funding by $800 million per year over the next four years, and also set aside $2 billion to account for any "overestimation of the current readiness of school networks."

Plus, once installed, maintaining these networks will require another $1.6 billion per year in E-Rate subsidies.

The call for more funding comes as the FCC is evaluating how to reallocate existing funding, prioritizing broadband expansions to meet ConnectED's goals. The agency announced in March that it is planning changes to E-Rate that could take effect as early as 2015, with subsidies for older technologies, such as dial-up Internet connections and phone bills, among the first to go.

FCC Chairman Tom Wheeler said in a March address that E-Rate’s pivot toward broadband could ruffle the feathers of some still reliant on these older technologies. 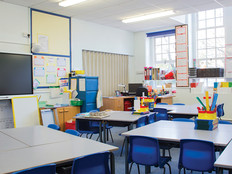