The teaching method is approaching “mainstream” status, according to the report.

A new survey shows the flipped classroom model is expanding and changing in K–12 classrooms, with 30 percent more teachers adopting the teaching method since 2012.

The data is based on the results of an online survey taken by 2,358 educators that was conducted in February by the Flipped Learning Network (FLN) and Sophia.org.

The flipped classroom concept, pioneered by teacher and author Jon Bergmann, swaps homework time with lecture time, meaning students first listen to or watch a lecture about a topic outside of school before learning more about it in class.

The concept has been around for years, but it's now coming close to "mainstream" status, FLN notes in its study.

"These statistics clearly show the flipped classroom is no longer something done behind closed doors," according to FLN. "Flipped learning is in the mainstream."

Recognition of the term "flipped learning" has grown, reaching 96 percent of respondents, up from 73 percent in 2012. It's also received more acceptance among school administrators. Three out of four administrators support their teachers’ flipped classroom efforts, according to the survey. And nine out of 10 teachers indicated student engagement had improved with flipped learning.

Middle and high school teachers are still the most likely to use the flipped classroom technique, but the survey noted there has been a rise in its use by elementary-school teachers (15 percent) and instructors at higher education institutions (27 percent) .

The typical flipped classroom teacher has been trying out the method for less than two years. But the survey's data show that it's not just new educators experimenting with it. Nearly half of respondents have more than 16 years of teaching experience.

"The myth about 'older' teachers being out of the technology mainstream doesn't hold up in a flipped classroom."

One of the initial notions of flipped classrooms was sending students home with links to videos for instruction so they could return to school the next day to put the concepts to use. The online requirement has been a key point of contention among teachers sensitive to the needs of students who don't have computer access. Two K–12 teachers discussed the issue in a Google Hangout video on their experience with flipped classrooms.

While the survey indicates about half of respondents use videos once or twice a week, 34 percent use them less than once a week, and 5 percent of flipped classroom teachers have yet to assign any videos.

The full survey results can be viewed in an animated infographic on Sophia.org. 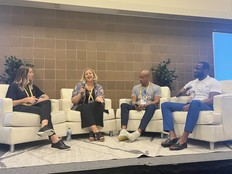