By virtualizing desktops, Madison City Schools’ Katrina Bowling worries less about the age and capabilities of the district’s PCs.

When teachers attend seminars and find out about new educational technologies and programs, they're excited to come back to their districts and apply what they've learned.

There's one catch, though, says Katrina Bowling, technology coordinator for Madison City Schools in Madison, Ala., whose team supports 9,300 students and another 1,000 faculty and staff: The district must have technology in place that allows an IT department to ­easily add new programs as teachers discover them.

That's why Madison City Schools went through an infrastructure upgrade over the past two years that included three HP Blade chassis with 26 host machines and storage from EMC. The district then installed VMware's Horizon View virtual desktop infrastructure (VDI) software, which gives users anytime, anywhere access to their desktops as long as they have Internet access.

By virtualizing desktops, Bowling says the district could take the age and capabilities of its PCs out of the equation by repurposing them as simple boot-up devices that connect to virtual desktops on the district's servers. The district also reduced the ­number of images to just four: one each for faculty, staff, secondary ­students and elementary students.

Before, "every time a new educational program came along, we had to consider if our units could run it, how to include it in an image and how long creating that would take, as well as how we were going to install the new program on 15 different models of desktops and notebooks," Bowling explains. "We just got to a point where it was hard to service our customers."

Now, the district can deploy new programs and updates by applying them straight to the desktop images on the servers, eliminating compatibility issues, Bowling continues. The district also upgraded all of its users to Microsoft Windows 7 and Office 2010.

"Another real benefit is that VDI lets us replace old machines as they die a natural death, as opposed to being forced to do it because they are inadequate," Bowling says. "It takes us out of the endless process of refreshing PCs. Before we deployed VDI, we were four years behind on our refresh schedule, and 3,500 PCs — more than 75 percent of our inventory — were more than five years old and incapable of being upgraded to run anything beyond Windows XP."

$430 Average cost of a zero client desktop, compared with the roughly

Also, refreshing desktops and ­notebooks every three to five years gets expensive for budget-conscious districts, Bowling says. Zero clients running virtual desktops cost roughly half of a typical desktop PC, and thin clients cost about one-third less than standard PC notebooks. In addition, zero and thin clients last at least twice as long as their PC ­counterparts because they have virtually no moving parts to wear out or break, as well as no ­processing or memory ­limitations. Consequently, replacing these devices doesn't have to be done nearly as often, resulting in more cost savings.

"The money we saved on the client machines let us reinvest the funds to the new back-end infrastructure and the virtualization solution," Bowling adds. "We are also in a better position to ­support students and teachers in bringing their own devices to school. They do a one-time installation of the ­virtual desktop ­client linked on our website, and from then on, they ­simply open it and log in to their virtual desktop on the server. They have the same resources — email, files and programs — as they would if they were ­sitting in front of a district-owned computer."

Cozying Up to BYOD

Tracy Cole, director of eLearning and technology at Oak Hills Local School District in Cincinnati, says the move to VDI was spurred by parents' desire for the ­district to embrace a bring-your-own-device initiative.

"Our community wanted BYOD, and we decided that the families do a better job supplying the students with the devices than we do," Cole explains. The district ­supports about 8,000 students and another 800 faculty and staff.

"The idea was to use the virtual servers and desktops to give students access to the software they needed," Cole says. "And running the virtual desktops on thin clients or the tablets that students bring in is much cheaper than traditional notebooks."

The district deployed the system in 2010 and estimates it has saved $1.27 million over those three years. Most of the savings come from the reduced number of software licenses, fewer types of devices, lower electricity costs from server ­virtualization, and less maintenance on ­clients (because all the software resides on ­district servers).

In an April blog post, David Johnson, principal analyst for infrastructure and operations at Forrester Research, observed: "We see a lagging indicator of IT shifting the reasons why they're interested in client ­virtualization technology. It's no longer about cost and ­efficiency; it's about employee work style flexibility."

Translate that trend to the student population, and it's clear why a district such as Oak Hills Local School District deployed VDI as a path to BYOD.

VDI also is a time saver. David Sanders, formerly the director of information ­technology at Tolleson Union High School District in Tolleson, Ariz., and now ­director of IT at nearby Mesa Public Schools, says VDI allows him to make changes and save a new image in less than 30 minutes.

At Tolleson, Sanders deployed VDI-in-a-Box from Citrix Systems. He says the product's real advantage is that everything comes preloaded, including the VDI software and the storage.

Moving forward, he says that VDI makes sense for Mesa, a district with more than 65,000 students.

"Sustaining a one-to-one program in such a large environment is almost impossible," Sanders says. "We'll have to move to BYOD, and the only way we can really support that is by supplying a virtual desktop on the devices people bring to school. We haven't decided on a solution, but we know VDI is where we have to go."

Alabama's Madison City Schools system offers the following pointers to districts in the early stages of a VDI deployment: 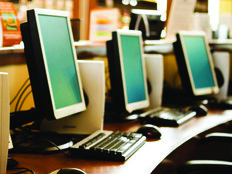