Bob Summers says ShoreTel’s base-model phones had all of the ­features the Kaukauna Area School District wanted, without add-on costs.

"Wouldn't it be nice if we could just answer our office phones while sitting on our couches in our pajamas?"

This question, posed by a Kaukauna Area School District ­principal who was lamenting having to drive in for an administrative team meeting following a snowstorm, makes Bob Summers smile.

Before Summers, technology ­coordinator for the seven-school ­district in east-central Wisconsin, could speak up, "one of the other principals ­exclaimed 'You can!' and then explained how he uses his cell phone to divert his ­office calls to his ­mobile device," Summers recalls. "He beat me to the punch."

That ability is just one of many benefits KASD has enjoyed since transitioning to a Voice over IP ­solution from ShoreTel. "When we first started ­looking for a phone system, we wanted it to hook up to our T1 line," Summers explains.

With the old leased system that Summers ­inherited upon joining the KASD staff in 2004, "if a ­student or ­teacher made a 911 call, we didn't know it until the police or fire ­department showed up. We'd have to look through all of our phone logs to find out where the call came from."

The combination of ShoreTel phones that KASD now uses — IP Phone 230 three-line, IP Phone 560g six-line and IP Phone 655 12-line models — have "the best on-board speaker phone functionality I've seen," he says. The system's Code Blue and 911 features send instant messages to designated personnel if an emergency call is placed, "so we know exactly what room the call came from, and we can deal with it immediately." And the Follow Me Find Me feature about which the principal raved cuts down on missed calls and voicemail by tracking down users wherever they are when calls come in.

Summers couldn't be happier with the ShoreTel solution's ease of use and performance to date. "You can literally pick up a phone, plug it in somewhere and it will work," he says. "You can be tracked down anywhere. Being able to communicate with parents — or each other — whenever we need to is extremely beneficial."

The savings have been substantial. Before the ShoreTel deployment, KASD spent $2,450 each month on phone systems, but now monthly support costs are just $1,040. When the ­district's nearly $350,000 investment in the equipment expires next year, it can buy out the lease for just $1.

Summers and his IT team haven't yet decided if they'll keep what they have or consider another overhaul. "If it's still running and providing ­everything we need, I don't think I would make any changes," he says. "The system works really well."

"We rely on Microsoft SharePoint 2010 and Microsoft Lync 2010 to give our teachers instant access to data — and each other — from a centralized point. We're even working with Microsoft's Lync Technology Adoption Program to develop an after-hours homework help line for students."

"Our superintendent, Dr. David Peterson, was looking for a way to bring professional development to schools during the day. Our eCoach bus is equipped with ShoreTel Voice over IP handsets that connect to the district's wide area network through a cellular connection, allowing us to train users on new phones as they are deployed at schools."

"Cisco's telepresence rooms are designed to provide a complete experience, as opposed to simply delivering video. It's remarkable to watch teachers and students collaboratively problem solve to figure out how to make the new system address their individual needs."

of enterprise organizations are accelerating their unified communications and collaboration plans because of the influx of mobile computing devices; 62% of small and medium-sized organizations are doing the same.

The anticipated worldwide market for premises-based UC by 2016, up from $12 billion in 2011

of IT professionals expect to see a return on investment from unified communications rollouts in a year or less. 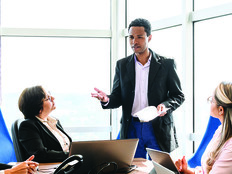