Oro Grande School District teachers are breathing life into classes, much as the fictional Dr. Frankenstein did with the eponymous monster of his creation.

Last year, sophomores at Riverside Preparatory School, the district's K–12 charter school, studied Mary Shelley's 1818 novel, Frankenstein; or, The Modern Prometheus, in their history, science and English classes. Then the students conducted a mock murder trial of Dr. Frankenstein at the city courthouse, where they served as prosecutors, defense attorneys and witnesses.

The two-part interdisciplinary project is part of the district's effort to focus on collaborative, project-based learning activities and keep lectures to a minimum. For the Frankenstein project, students worked collaboratively to develop their arguments and testimony, and used computers to conduct online research, write case ­outlines and create courtroom presentations.

"When I was in school, teachers stood behind a podium and just talked. It was very boring," says Michael Andreasen, director of information technology for the three-school district in San Bernardino County, Calif. "Our teachers come up with amazing projects that bring students' education to life. It's more interactive and a better way to learn."

As CDW•G's recently released Learn Now, Lecture Later report confirms, the idea of a teacher serving as a "sage on the stage" is slowly giving way to an alternate approach, one in which the teacher functions as "guide on the side" so that students can steward their own learning experience. Based on a spring 2012 survey of 1,015 high school and college students, faculty and IT professionals, the report found that 47 percent of teachers have shifted away from the lecture-only model of teaching and another 20 percent of them are considering using different instructional methods.

While traditional lectures are standard, many teachers believe the approach is far less effective for today's ­students, who are fully immersed in technology when they aren't at school. The report bears this out, finding that the most satisfied students listen to fewer lectures and use more technology in their classes. Although 38 percent of student respondents say they want to learn via lectures, the remaining 62 percent prefer more variety, including hands-on or group projects, independent study, distance or virtual learning and one-to-one tutoring.

Teachers who are eager to transition away from the lecture-only model are asking for more technology to facilitate the process. The majority of surveyed students also indicate that they would like even more technology incorporated into their classes as learning tools.

On the Flip Side

Some teachers, anxious for fresh approaches, are experimenting with "flipped classrooms." In this model, teachers record and post videos of their lectures for ­students to view at home, on their own time, and spend class time assisting students as they do their homework.

The flip also frees up class time for collaborative activities, says Dan Spencer, a former high school teacher who now works as an educational technology consultant for the Jackson County Intermediate School District in Michigan. "You can have individualized learning, and teachers can have more one-on-one time with students," he explains. "That's huge."

Stacey Roshan, who teaches upper school math at the Bullis School in Potomac, Md., can attest to that. Before flipping her Advanced Placement calculus class two years ago, she recalls, "I was trying to get through the material as fast as possible so I could answer questions at the end of class. But it felt like I never had enough time." After seeing a demonstration of TechSmith Camtasia at a conference, Roshan decided to incorporate the screen-recording and video-editing software into her teaching that fall. With a tablet PC, she began recording 25-minute video lectures for students to watch and absorb outside of class.

Each semester, Roshan's students watch about three videos a week as homework. During class time, she assigns them calculus problems to work on alone or in groups. As students work, she roams around the room, listens in on discussions and offers help when needed.

The flipped approach is paying off. Students have less anxiety about the subject matter because they have one-on-one time with her in class, Roshan says. It also has increased collaboration among students, which has improved their comprehension of the material and led to higher scores on the AP exam.

"In a traditional class, a large part of class time is ­consumed with the teacher talking. There isn't time for personalized learning," she says. "Moving teacher-driven activity outside the classroom and devoting class time to problem-solving allows students to get help from their peers and teach one another. And I'm always there to help and guide."

According to Andreasen, who handles all IT infrastructure but also provides technical support to Oro Grande's sixth- through 12th-grade students, the district uses multiple teaching methods to meet students' needs.

Oro Grande Elementary School and Riverside Prep focus mainly on project-based learning, but they haven't ­eliminated lectures. Teachers regularly front-load concepts via lecture when they are introducing new material, he says, but they dedicate the bulk of class time to hands-on activities and group projects that tie into state standards. The alternative high school, Mojave River Academy, offers independent study and an online curriculum for students who prefer to work with faculty at their own pace. "This environment helps students take ownership of their education," Andreasen says.

District teachers also have the freedom to vary the length of student projects. Some projects last a few weeks, while others consume an entire quarter. But they all take a cross-disciplinary approach, says teacher Colin Opseth, who also serves as director of information technology (and provides technical support) for the elementary school grades. "We present a collaborative work environment that mirrors things students will see in their careers," he says. "In the real world, they don't just do math; they do math with something else."

Just 23% of high school students are very satisfied with the way their teachers spend class time.

The district also is investing in technology. Before Riverside Prep opened in May 2011, IT staff equipped each classroom with PolyVision eno interactive whiteboards, Mitsubishi ­projectors, Elmo document cameras, a computer, speakers and an audio-visual control panel. The IT team also installed projectors and document cameras in each elementary and middle school classroom.

To further the effort, the district is piloting a bring- your-own-device initiative at its charter high school. A new 802.11n Wi-Fi network from Aruba Networks allows students to access online applications and ­conduct research while at school.

All of these technologies are critical to bolstering the district's project-based learning efforts, Andreasen says. "Students need information," he explains. "They can't be tied simply to what's available in classrooms."

The Learn Now, Lecture Later report confirms that, for most districts, changes in instructional delivery and the availability of classroom technologies will come at some cost. In fact, 87 percent of the IT professionals surveyed say they need to upgrade their institution's IT infrastructure before such changes can occur.

The 17-school Port Huron Area School District in St. Clair County, Mich., is transitioning from straight ­lectures to project-based learning and other interactive teaching methods, says Mark Washington, director of technology and media services. To support the effort, the IT department is upgrading the infrastructure and increasing classroom technologies as funds allow. 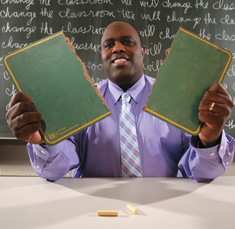 A spring 2011 bond measure made it possible for the Port Huron Area School District to overhaul its aging IT infrastructure. "You can't teach with technology unless you have the resources to match," says Mark Washington.

To date, the IT staff has upgraded and virtualized most of PHASD's servers and has replaced old networking equipment with new Enterasys Networks switches, boosting bandwidth speeds from 10/100 megabits per second to 1 gigabit per second at each school site. The district also extended Wi-Fi to each campus. "You can't teach with technology unless you have the resources to match," Washington says. "We no longer have network performance issues."

A bond measure approved by voters in spring 2011 allowed PHASD to purchase interactive whiteboards, projectors, computers and wireless keyboards for teachers in every classroom in one high school and in 11 elementary schools. Next summer, the district will equip the remaining two high schools and three middle schools with the same technology.

Over the past two years, PHASD also has added 1,100 tablets, 850 netbooks and 800 desktop computers to its technology offerings and is even allowing students to bring their own devices to school.

Already, these investments are making a difference, allowing teachers to transition to more hands-on and project-based learning activities. For example, in May, every teacher and nearly every student at Cleveland Elementary School in Port Huron was given access to a tablet. Teacher Kathleen Cilluffo's students used the devices to do research, watch videos, play educational games and complete simulations. "It was far more effective to use the simulations with the textbook than to use the textbook alone," says Cilluffo, who is teaching third, fourth and fifth grade this year. "There's greater immersion."

Meanwhile, Kathy Serazin, a kindergarten teacher at Cleveland last year, had her students use the tablets to post to a children's blog site. "If they couldn't read someone's post because there were no spaces between words, they would comment on that," she says, adding that the exercise resulted in a lot of engagement and discussion about reading and writing skills.

Now a first-grade teacher at Howard D. Crull Elementary School, Serazin is turning her classroom into a newsroom this year and will have students report on the latest curriculum news using the tablets as both video cameras and teleprompters.

Three years ago, the district equipped Catherine Leon, a Spanish teacher at Port Huron Northern High School, with 16 Acer Aspire One netbooks and multimedia players. When Leon isn't lecturing, her students practice their skills by performing in plays, blogging or listening to podcasts — all in Spanish. "The technology has transformed teaching and learning," she says. "For students to pick up a language, it's not about me lecturing. It's about them practicing — speaking and writing — in Spanish."

Ultimately, educators say, moving away from straight lectures to different teaching methods engages students, motivates them to learn and allows them to succeed. As the Bullis School's Roshan explains, "It's about changing the traditional dynamic and making the classroom a more student-centric, instead of teacher-driven, place."