CDW’s Daniel Fistler uses the Ergotron WorkFit-S Sit-Stand Workstation, allowing him to sit or stand throughout the workday.

With continued economic uncertainty and the need to do more with less, school districts and other organizations may be reluctant to make investments in office furniture, keyboards and other technical peripherals. But such reluctance could be shortsighted — and costly.

The U.S. Occupational Safety and Health Administration estimates that nearly one-third of all serious occupational injuries and illnesses stem from overexertion or repetitive motion. Problems can arise from a number of factors, such as desks or chairs ill-suited to individual workers or simply sitting too long at work.

The economic impact can be staggering. OSHA estimates that work-related musculoskeletal disorders such as carpal-tunnel syndrome, shoulder tendonitis and back pain result in about $20 billion annually in direct costs and billions more in indirect costs.

"Ergonomics should be top of mind for organizations when selecting products because of the long-term implications," says Suneel Goud, senior product marketing manager for Microsoft, which offers specially designed keyboards and mice and employs an on-staff ergonomist to develop and test its products.

There's no question that lack of ­exercise coupled with sedentary behavior at work have a negative impact on health. The good news is that today, manufacturers are using the science of ­ergonomics to create products that help employees work more comfortably, efficiently and safely.

Helping staff feel as comfortable as possible while they're working is one reason for becoming ergonomically aware, but that doesn't mean ergonomics is just a "feel good" strategy. The right combination of equipment and best practices can significantly improve operations.

Some experts go as far as to call common workplace practices, such as sitting at a desk all day, a risk factor for disease. They point to a 2010 American Cancer Society study that found close ties between mortality and the number of hours spent in a chair:

It Doesn't Hurt to Stand While You Work

So what's an employer to do? One ergonomically correct answer is to encourage workers to stand more while on the job.

"The benefits are tied to the work that is done by the gluteus maximus — the biggest skeletal muscle in the body," says Jane Payfer, chief marketing officer at Ergotron, a maker of sit-stand workstations and other ergonomic display-mounting solutions. "When you are standing, it is doing the work it is supposed to be doing. When you are sitting, it isn't, and that is throwing off the body's chemistry." 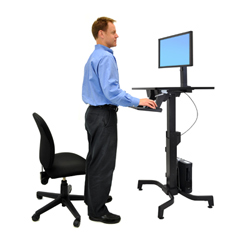 The WorkFit PD from Erogtron lets workers sit or stand while they work.

The good news is that today's sit-stand workstations offer new capabilities at economical prices. The latest units are designed for flexibility: Users can quickly move platforms for monitors and keyboards up or down, giving them the option of changing from standing to sitting throughout the day, depending on the task at hand and what feels best physically.

"When you have a desktop that's easy to adjust, you can make the decision to change positions intuitively," Payfer says. "If adjustments are difficult to do, your body might be telling you it is time to sit down, or it is time to stand up, but you won't want to go through the process."

But do sit-stand desks make a difference? Early studies suggest they do. For example, when one Fortune 500 healthcare company in Minnesota evaluated sit-stand workspaces, all of the users said the change made them feel better.

"So much of productivity actually goes back to how people feel about coming into work every day," Payfer adds. "And if you feel better coming into your workplace, you are a happier, more engaged employee, and you are more productive too."

Others agree. As a corporate account manager for CDW, Daniel Fistler spends most days at his desk talking with clients on the phone. About two years ago, he installed a sit-stand desk and now says he spends about three-quarters of the day standing.

"I love being able to stand. Sitting at a desk for a long period of time just feels unhealthy," Fistler says. "I look at it as preventive maintenance when it comes to avoiding back problems."

At various times throughout the day, Fistler will sit for short periods to rest his legs, so he appreciates having a desktop that he can adjust quickly.

"I have the option to convert from sitting or standing in about three seconds," he reports. "I try to change positions throughout the day."

When workers decide to sit, they should have a chair that matches their body size and work routine. "If you have only so much money to spend, where's the best place to spend it? On a good chair," HERO's Springer says.

He cautions that ergonomically designed chairs typically cost much more than office-supply models. "If you want something that's intended to comfortably support people, you will have to spend a little more money," Fistler says. "But now, manufacturers are pushing high-end features down to less expensive models."

Before organizations shop for expensive office chairs, however, they should make sure users' existing chairs are adjusted properly.

"Is it at the right height to support your body and help you make good use of the back rest and arm rests?" Springer asks. "Test this out by seeing how it supports different work postures. For example, when you write, you will lean forward more; when you are on the phone, you may lean back."