IT administrator Marcos de Oliveira at Brookstone School says new energy-efficient blade servers will help the private school save on its energy bills.

Blade servers, netbooks and virtualization top a list of technologies that are helping schools save money and increase ROI.

I.T. administrator Marcos de Oliveira knows he needs to pinch pennies, but that won’t stop him from pursuing and continuing tech projects that make economic sense.

Faced with a sluggish economy and a reduced IT budget for the rest of this fiscal year, the technology director at Brookstone School in Columbus, Ga., won’t have the money to deploy microsoft Office communicator messaging software and complete a Wi-Fi installation as he had hoped. But he will continue with an existing project to replace old rack servers with new blade servers.

The blades, funded before the recent budget cuts, are necessary because the private K–12 school needs to migrate from the discontinued Novell Netware operating system to Microsoft Windows 2008 server. The new servers provide a secondary benefit: lower energy bills. The blades, with their compact design and more energy-efficient processors, power supplies and cooling fans, consume a lot less energy. and in a tough economy, it’s about doing more with less — and de Oliveira aims to do his part.

“We will see a significant decline in power usage when we finish the migration to blades, and that will generate cost savings,” he says.

As the recession continues, many school IT directors find themselves in similar situations. many school districts are planning budget cuts as they wait for details about how the stimulus package could aid education. In Wildwood, Mo., for example, the Rockwood School District is tentatively planning to cut its IT operating budget by 8.5 percent for the new fiscal year, which will force the IT department to hold off replacing old computers and reduce training and travel, says Rockwood CIO Steven Beatty.

Although tech budgets are being slashed, not every IT project has to languish. Belt-tightening offers IT departments an opportunity to prioritize projects that provide the most value and return on investment, analysts say. For example, some districts are pursuing green IT initiatives such as server virtualization, which consolidates servers and helps reduce power and cooling costs in the data center; others are taking advantage of collaboration and communication software to increase employee productivity.

Schools are trying to spend the money they do have wisely, or are finding creative ways to pay for new technology. For example, leaders in South Dakota’s Elkton Public schools gave new technology director Gabriel Pooler $40,000 to build a new network this school year. But rather than spend all the money to overhaul the network, he found an alternative solution that fixed the network problems for about $2,000. When he inspected the network, he discovered the equipment was still good but misconfigured, which slowed network speeds and made it unreliable. With the money saved, he purchased tablet computers and classroom projectors for every teacher and initiated a one-to-one computing program for the district’s 25 high school students by buying netbook computers, which are more affordable than full-fledged notebook computers.

The district has long wanted to implement a one-to-one program, but it didn’t have the funds to purchase notebooks or tablets. The Acer Aspire netbook, which costs $390, features a 9-inch screen, a 1.6 gigahertz Intel Atom processor, 1 gigabyte of Ram, a 160GB hard drive and Wi-Fi support. It runs on Windows XP, features a six-cell battery that provides five to eight hours of battery life, and weighs only 2.2 pounds. The small form factor and light weight is perfect for students, Pooler says. They can easily slip the netbooks into their backpacks without adding much weight. They can also use their netbooks in class and still have room on their desks to open textbooks.

Because tablets typically cost about $1,200, Pooler figures he’s saving about $800 per student on hardware costs by standardizing on less expensive netbooks. Equipping seniors with netbooks also frees up the existing computer labs for the younger grades, he says. If the pilot is a success and the budget permits, Pooler hopes to expand the one-to-one netbook program to every high school student and possibly seventh- and eighth-graders.

“They are a new education tool,” he says. “and they are a good, affordable option for schools.”

Sleep and hibernation modes can reduce PC energy consumption by 60 percent, according to Climate Savers Computing Initiative, a nonprofit organization.

To reduce its energy bill, california’s modesto city schools installed remote power management tools that will automatically shut down the district’s Pcs at night, a move that will save roughly $300,000 a year in electricity costs, says Harold Rhodes, the district’s supervisor of computer systems.

It is district policy to turn off computers at day’s end, but many computers are left on all night and through the weekend. “We can tell people to turn the computers off until we’re blue in the face, and many still won’t do it,” says stan Trevena, the district’s director of information and technology services.

In February, the district installed Faronics’ Power Save software on 6,200 PCs essentially for free, through a rebate program from its power company. The IT department initially will pay $62,000 — $10 per PC — and the utility will send a full rebate once it verifies the software’s installation.

Modesto is also using Vmware’s virtualization software to consolidate servers, which reduces electricity costs. Each of the district’s 23 elementary schools used to have several servers. now, the district has consolidated those into a rack of five blade servers that house 60 virtual machines (Vms). The result is fewer servers, improved server utilization and power savings, Trevena says.

Brookstone School’s IT department, which is migrating from rack servers to 14 IBm blade servers, is also dabbling in virtualization, using one Vm as a print server and another to migrate files from netware to Windows. The school is also investigating whether to build a computer lab using desktop virtualization software, which is more energy-efficient and less expensive than using regular desktops.

As for the blades, the main benefits are lower energy consumption and simpler IT management, Brookstone’s de Oliveira says. With a chassis, blades share the same resources, including power supplies, cooling fans and connections to network and storage systems. The architecture consumes less power and takes up less data center space, which will result in cost savings. also, it’s easier to manage and repair blades because the parts are hot-swappable, require less cabling and are centrally managed through software management tools. With clustering and redundant services, if a blade or component fails, users don’t experience downtime.

Districts should consider online collaboration and communication tools to improve worker productivity and workflow, while reducing the amount of paper that schools generate, says Rockwood’s Beatty.

In recent years, the district has rebuilt its intranet using Microsoft Office SharePoint Server. Administrators and faculty can post meeting agendas, collaborate on documents and share information electronically using blogs and wikis. The IT department also is working with teachers to build sites that let students turn in their homework electronically, saving time, paper and money, Beatty says.

“Online training, online meetings and collaborative tools can be effective and provide a good return by reducing travel time and costs,” Beatty says.

IT staffers should take advantage of tools that allow them to work more efficiently, such as management software for remote troubleshooting of servers and computers, Brookstone’s de Oliveira says.

Amber Dunn of Advanced Academics says the DeVry unit offers 90 web-based courses to school districts that may have trouble finding specialists such as a physics or foreign language teacher.

Cash-strapped districts that need to offer more classes or alternative education choices can save money by hiring third-party companies that offer online learning programs. advanced academics, a subsidiary of DeVry based in Oklahoma City, offers 90 web-based courses, including advanced placement classes, to students in grades six through 12 in schools across 30 states.

Students take the web courses in their school’s computer lab or at home, with the company’s online teachers available over the phone or through e-mail or instant messaging.

Overall, the troubled economy has forced many school districts to reduce their budgets, and IT departments have not been immune. But IT departments can adapt by pursuing projects with good ROI, says Rockwood’s Beatty.

“It is essential to make sure projects add value; that they support the district’s mission and goals and provide an expected return for the dollars invested,” he says.

5 Ways to Reduce the Electricity Bill

In addition to powering off computers, here are five ways to decrease power consumption.

4 Tips to Maximize IT Budgets 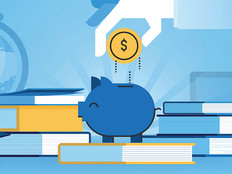 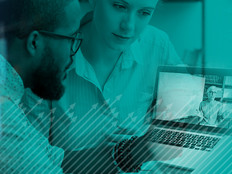 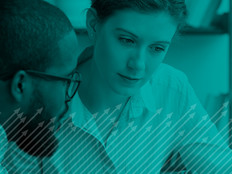