Researchers from the Massachusetts Institute of Technology and the University of Innsbruck in Austria have developed the first five-atom quantum computer, reporting their findings in the March issue of Science magazine. This represents a remarkable leap forward, delivering greater stability and more scalability than its predecessors and thus making it possible to build even bigger and more powerful quantum computers.

Unlike conventional memory, made up of binary digits (or bits), quantum computers use qubits, which can represent 1, 0 or both at once. Accordingly, quantum computers are on track to exponentially expand the capabilities of computational research.

But alongside the exciting potential is a major red flag: The technology also carries the ability to crack traditional encryption, such as the RSA encryption now used to protect credit card data, government information and other confidential material — an issue serious enough to have drawn the attention of the U.S. National Security Agency.

Although the potential threat to encryption grabs headlines, “it’s actually not the most useful application of quantum computing,” says Scott Aaronson, an associate professor of electrical engineering and computer science at MIT. More useful, he says, is the function that a group of physicists first envisioned in the 1980s: using quantum computing to simulate quantum physics. 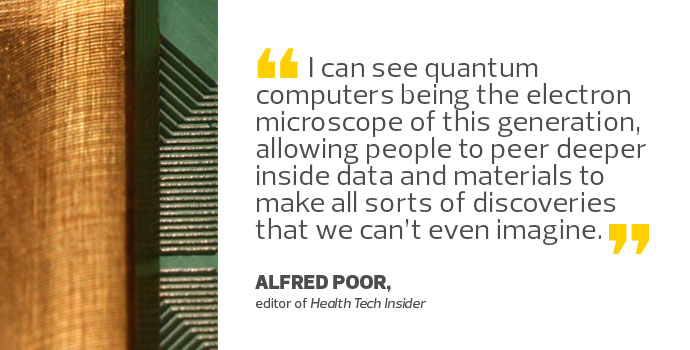 So what does the ability to simulate quantum physics mean in terms of real-world applications? For starters, it means that quantum computing can be used to design new pharmaceuticals, nanomaterials and superconductors. Quantum-based products like these could form the basis of our future economy.

“Obviously, the physics and math departments will find applications for this sort of technology, though the former may apply it to building better bridges and the latter to creating yet more elegant theories,” he says.

He suggests that some universities may want to expand their traditional computing courses and degrees — for example, in computer engineering and data science — to encompass the emerging focus on theoretical sciences, primarily quantum physics and quantum computing theory. Others may wait for additional developments to unfold. Either way, Poor says, universities should take care in handling that shift. Because the field of quantum computing is so new, related skill sets have yet to be clearly defined — exactly the case in the early days of classical computing and Big Data.

“It is the modeling that’s going to be the driving force, and universities remain the focal point for all sorts of research,” says Poor. “I can see quantum computers being the electron microscope of this generation, allowing people to peer deeper inside data and materials to make all sorts of discoveries that we can’t even imagine.”