An analytics program developed at Purdue University predicts how students will perform in a course.

A data mining student progress program gives students a real-time glimpse at how well they’ll do in a course.

Course Signals was developed by Purdue University in 2007 as an early-warning system for educators seeking to bolster student retention efforts. It's proved so successful that it's now being used at a number of other higher education institutions.

Course Signals uses algorithms to predict how a student is likely to perform later in a course. The software program works by analyzing factors of student progress, such as points accumulated in a course, whether an assignment was opened or completed, past performance and demographic data, including a student's high school GPA and current grades, according to a press release from Purdue.

The program combines these factors to determine a value that falls into one of three color-based signals, which it displays on the student’s course website. A red light indicates that serious changes will be needed for a student to do well in the course, yellow indicates room for improvement, and green indicates a student is on track for success.

Course Signals began as a research project at Purdue University in 2005. Introduced to courses in a pilot program at Purdue in 2007, it rolled out campuswide the following year; it has been used by 24,000 students at multiple schools, according to NPR. After seven years of use, it's an established program at the university.

But while the program gives students insight, it's also learning from their input and requests. Programs like Course Signals are among the first generation of attempts at educational data mining, NPR reports:

"When students use software as part of the learning process, whether in online or blended courses or doing their own research, they generate massive amounts of data. Scholars are running large-scale experiments using this data to improve teaching; to help students stay motivated and succeed in college; and even to learn more about the brain and the process of learning itself."

There's also a fear of the predictive factor of Course Signals being a self-fulfilling prophecy. Purdue research scientist Matt Pistilli told NPR that some students do withdraw earlier after seeing their progress.

Do the ethical quandaries introduced by educational analytics outweigh the data gains? Let us know what you think in the comments. 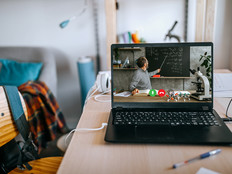