Students from Chevy Chase Elementary were given an on-site tutorial by Discovery Education and CDW•G on how to use the new technology their school won.

For the students at Chevy Chase Elementary School in Chevy Chase, Md., technology in the classroom has transitioned from an occasional visitor to a permanent houseguest.

The students regularly use word-processing software to write, and in music class, they use the interactive whiteboard to read song lyrics as they sing along. At a recent concert, the students performed a cover of David Guetta and Sia’s “Titanium.”

It’s safe to say that Renee Hammond recently struck the right note. Thanks to her diligent efforts last year, the chorus and general music teacher brought the pot of gold home to her school.

The elementary school was one of three schools, out of more than 700,000 entries nationwide, selected to win more than $45,000 in technology equipment in the 2012 CDW-G and Discovery Education “Win a Wireless Lab Sweepstakes.”

While some of the major concepts and ideas of music instruction, such as harmony, melody and rhythm, haven’t changed, the tools used to create and teach music certainly have.

“I felt like I was in the 19th century,” Hammond says jokingly.

She teaches a music class in which students use the Garage Band software to create their own music. But Hammond noticed that they were working in groups of three to four to a computer. Class work was being hindered by the availability of the computers as opposed to the inability to master music theory.

So when an email announcing the “Win a Wireless Lab Sweepstakes” arrived in her inbox, she leapt at the opportunity to make a difference in her students’ classroom experience.

Hammond dedicated herself to making an entry for the school nearly every day throughout the contest. “I wanted to win so bad,” she confesses.

Her efforts have been well rewarded. As Hammond sits in on the training sessions being held in the school’s media center by Discovery Education and CDW•G, she beams when the students thank her for bringing the technology treasures to Chevy Chase Elementary.

“This is wonderful,” Principal Jody L. Smith says as she observes the students chattering and collaborating on their brand-new notebook devices.

The students are busily searching for answers to the digital scavenger hunt that Michael Capps, a professional development specialist from Discovery Education, has sent them on.

As part of the prize, Chevy Chase Elementary students will have access to more than 70,000 video segments pulled from a combination of Discovery’s own material and partner content, Capps says. 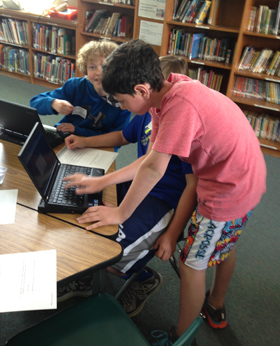 Henry Bernstein and his classmates work through the digital scavenger hunt during CDW•G and Discovery Education's on-site training at the school.

“The main difference I notice with today’s education is that teachers do a much better job with engagement. Digital [classroom] content allows teachers to be so much more dynamic,” Capps says.

When Capps walks the children through the different media content available through the Discovery Education website, he quickly reassures them of one very important thing: “Yes, we have games.”

Capps demonstrates a game called the “Whatdya Know Quiz Show.” The students pick a bird and a T. rex as their contestants, and they enthusiastically call out the answers to the game’s questions.

Fourth graders Will and Meredith are fans of math games. They’re particularly enthusiastic about SumDog.

But they also recognize that the Internet and classroom technology are about more than just gaming.

“I think it helps me get more resources quicker,” Will says with wisdom beyond his years.

Teachers have been instructing the 4th graders on the importance of citing online sources. Meredith already knows to avoid citing Wikipedia in any of her reports.

“They say Wikipedia is unreliable,” she says.

Emily Greenberg, a 3rd grade teacher at the school, finds that although kids are exposed to technology at an earlier age than generations before them, they still need guidance from their instructors.

“We do have to teach things like how to indent a paragraph or click on a link,” she says. “But sometimes they know extra things that I don’t know. They’ll make things disappear and reappear on the whiteboard on their own!”

Hammond feels that the two-way learning process with classroom technology benefits both students and teachers immensely.

In her music class, she pulls digital material into the classroom to provide students with music they can relate to and feel inspired by, she says. In the past, students have had to learn “school music” that didn’t reflect their experiences outside of the classroom. Now with the interactive whiteboard, notebooks and desktop computers in the classroom, students are free to draw inspiration from beyond the school’s walls.

“The availability is astounding on what you can bring into the classroom,” Hammond says. “With digital, the whole world opens up to them. It makes it more exciting for me too. They’re feeding me new things.”