As educational technology use continues to grow in the modern learning environment, K–12 school districts seek new ways to help students develop the tech skills they’ll need for the future. In some classrooms, that means introducing new tools for teaching and learning. On average, school districts access 1,417 ed tech tools per month, according to LearnPlatform’s “EdTech Top 40: Fall 2022 Report.”

Other districts take this a step further, finding ways to transform spaces within their walls into high-end, state-of-the-art tech learning centers. Three types of tech-centric spaces are labs, esports arenas and multimedia studios.

Located in Wisconsin’s Dane County, where students will find many manufacturing career opportunities post-graduation, Waunakee Community School District strives to provide a relevant, hands-on career and technical education experience. To that end, Waunakee High School has turned a half-used storage space into a lab the school calls the Innovation Center.

Dive deeper into the biggest trends in K–12 technology in 2023.

Discover the tech supporting the growing importance of physical security in schools.

The equipment has inspired students, says Jeff Willauer, the high school’s technology education teacher. “Our students have an innate ability to start exploring,” he says. While he does provide students with safety and operational training, he otherwise likes to step back.

“I try to get out of the way as best I can and just let them go,” he says.

As a result, engineering students, as well as those interested in art, cosplay and marketing, pursue a range of applications. They’ve worked on everything from record players and a desktop Raspberry Pi retro arcade game system to a ukulele.

“Putting technology in their hands gives them even more capability to create,” Willauer says. “It would be great if every school had something like this, and if this was as mainstream as a library.”

Click the banner below to explore all of the 2023 K–12 tech trends.

In 2021, New Jersey’s Edison Township Public Schools asked itself, “What’s the next thing that is going to prepare our children for their future?” recalls former District Superintendent Bernard Bragen.

The answer was an esports arena.

“A space like this really gets kids to express themselves, and maybe some kids will find out who they are,” says Principal Charles Ross of Edison High School.

The school spent nearly a half million dollars converting a traditional computer lab with unused computers into an esports arena with AMD Ryzen 7 computers. To ensure these computers can keep up with the demands of competitive esports, they’re outfitted with NVIDIA GeForce RTX 2060 graphics cards, ASRock motherboards, 16 gigabytes of RAM and 500GB solid-state hard drives.

However, the arena’s sole purpose isn’t just to build a robust competitive gaming program and engage students socially. It’s also a place for students to get hands-on experience building the infrastructure behind gaming, learn broadcasting technology and edit videos for the web and social media.

To support the program, Edison High School’s arena features a Cisco Network switch, a ChamSys QuickQ 10 lighting board and Blackmagic switchers, which control cameras between shots of the students and streams of the games they are playing.

Bragen, who now serves as superintendent of Montgomery County Schools in Virginia, believes the skills acquired in the esports arena will follow students beyond graduation. “There are so many different careers that come out of a space like this,” he says.

Click here to learn more about the new and inclusive esports arena.

When Chris Paskewich joined New Jersey’s Linden Public Schools with a new degree in broadcasting, he found the TV studio/classroom unused and filled with dusty equipment.

Given an annual budget, he worked to transform the classroom with tech purchases, turning it into a fully functional television production space. In addition to new computers running programs for professional-level video editing, the studio is outfitted with cameras, teleprompters, a soundboard, a video switcher and more.

Paskewich teaches two courses. The first covers the fundamentals of shooting and editing and equips students with visual storytelling skills. He’s seen students apply these skills immediately in personal projects on TikTok and on school projects.

“I’ve had students who have talked to teachers and asked, ‘Can I do a video instead of writing?’” Paskewich shares.

His second class is structured around creating, producing, recording and airing a weekly newscast on YouTube.

Both classes share the goal of empowering kids and their futures.

“If you learn the proper way to shoot and different techniques, you can be more creative than the next person,” he says. “You can learn the basics here and take it into any field you want.” 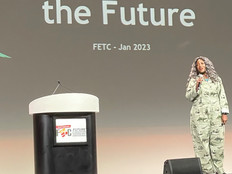