Access to a high-quality projector can be a huge benefit for K–12 classrooms. That’s particularly true at a time when, to accommodate physical distancing needs, classes and meetings may occur in spaces other than traditional classrooms.

A projector supports multimedia presentations and the use of learning apps in a shared and collaborative environment. But most projectors today require putting a large amount of space between the unit and the screen to generate large images, reducing interactive options for smaller spaces.

That’s a challenge ViewSonic resolves with its PS501X Digital Light Processing projector. The unit features a special lens that allows it to project a 30-inch image from just 2.4 feet away, though it also works up to 7.3 feet away to make larger pictures. 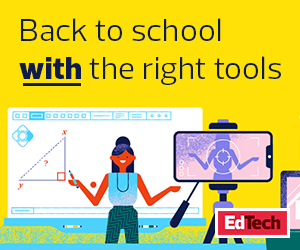 Enjoy Bright Images in Any Environment

Ideally, the PS501X would be ceiling-mounted above the whiteboard or screen to which it will project. For this reason, it can handle keystone corrections of up to 40 degrees to ensure images are set in a perfect 4-to-3 ratio. As a bonus, when configured in this way, teachers and students can stand in front of the screen without casting harsh shadows or blocking images because they won’t interrupt the short light beam coming from above.

Projectors with short-throw lenses generally don’t need a lot of raw light power because they aren’t pushing images out very far, but the PS501X can generate up to 3,500 lumens. Because of this, images don’t get washed out even in bright lighting. Presentations or slides can be run through the PS501X without dimming the overhead classroom lights. And the images look great, properly rendered using more than 1 billion colors. 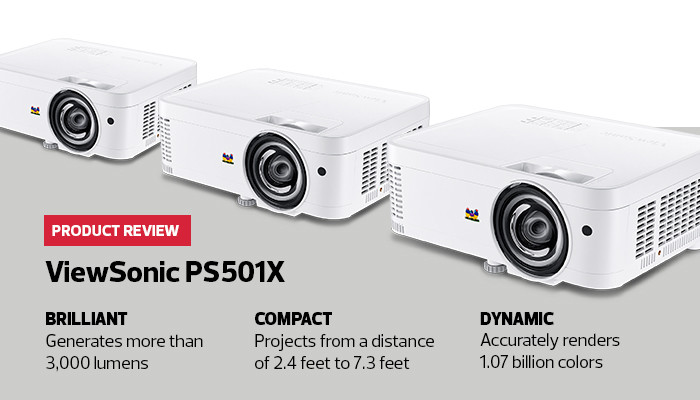 For sound, the PS501X has a 2 watt internal speaker. While that might seem weak for a big room, for a short-throw projector it works just fine — more than loud enough for a smaller space.

The PS501X is also versatile enough to integrate into almost any existing setting, with inputs for both an advanced HDMI 1.4 cable and an older composite RCA video line. It can also be fed by a VGA cable, a 3.5-millimeter audio jack or a Mini USB port.

Small classrooms can have a big impact despite their size when equipped with a ViewSonic PS501X short-throw DLP projector, which can give a tiny space some of the educational advantages of a large lecture halls.

READ MORE: Learn about other technologies that empower hybrid learning.

Designed for small or even tiny spaces, the ViewSonic PS501X Digital Light Processing projector can create a 30-inch image from just 2.4 feet away from a screen or surface. That’s impressive, but even the smallest of classrooms likely has more space to work with than that. Given that the unit can generate 3,500 lumens of raw light power, just creating a moderately sized image a couple of feet away seems like overkill.

Backing up to 4.75 feet, about halfway between the minimum and maximum supported distances, lets you create a 150-inch screen that is larger than almost every television on the market. This also lowers the number of lumens hitting the screen. At 2.4 feet, you get close to the maximum lumens, but at 4.75 feet, you lose about half that power. Images still look great, but they will appear slightly washed out at the edges of the screen in a classroom with standard overhead lights.

Moving to the maximum distance of 7.3 feet will let you create a massive, 300-inch display, which is probably more than most tiny spaces can handle. Lumens also drop off considerably at that distance. The images still looked good, and colors were accurate, but you would need to dim the lights to get a really good experience with a screen that size.

One thing to consider: Instead of investing in a larger screen area, PS501X users could instead buy time, in the form of lamp life. By default, the projector operates at full power and has an estimated bulb life of 5,000 hours, or about six months of continuous operation. But again, if the PS501X is less than 3 feet away, its 3,500 lumens are overkill. Instead, users can activate eco mode. The difference in the brightness of the screen at that distance will be almost unnoticeable to most people, yet this extends the projector’s estimated bulb life to 15,000 hours, or almost a year and a half of continuous operation. If you actually power it down when not in use, the PS501X will likely last a very long time.

With such great starting points in projected screen size, raw lumens, power usage and lamp life, users have a lot of choice when setting up their ViewSonic PS501X short-throw DLP projector in a tiny classroom. Teachers and schools can choose screen size or longevity, or find a good balance in between. 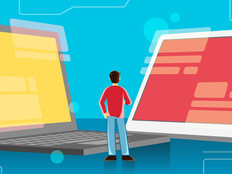 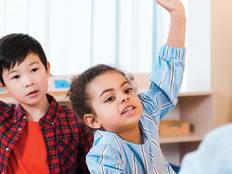 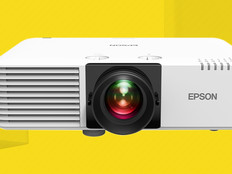