The bad news is: 6.5 million students still don’t have the internet connections they need. The good news, however, is that this number is a milestone decrease in the digital divide, according to EducationSuperHighway’s 2017 State of the States report.

EducationSuperHighway credits the E-rate program and state leadership with narrowing this gap by 84 percent.

Leaders at the nonprofit are so encouraged by this close in the connectivity gap that they have pledged to have zero students left without proper internet connections by 2020.

“Success is within reach,” writes CEO Evan Marwell in the report. “Let’s make that final push toward digital equality in every school, for every child.”

We’ve gathered from the report the key takeaways to making this happen.

About 79 percent of schools and libraries have credited the E-rate program with their faster internet connections, but the FCC’s program alone can’t close the digital divide. EducationSuperHighway reports that 46 state governors are working to connect more students by championing legislation that improves affordability, expands fiber connections and puts Wi-Fi in every classroom.

“Access to high-speed internet is no longer considered a luxury, but a basic necessity for 21st-century learning,” says Pennsylvania governor Tom Wolf in part of the report. “With funding to help schools access this vital tool, we can level the playing field and ensure every child in Pennsylvania has access to a high-quality education that will equip them with the tools to compete in a high-tech economy.”

Thanks to state leadership, public schools in North Carolina are poised to give all students access to broadband internet by 2018.

Fiber Will Connect Schools to the Future of Education

While setting up the standard connectivity is very important, the report indicates that fiber connections will become increasingly more important as education technology changes and emerges.

“To handle today’s digital learning demands and the need for additional bandwidth in the future, fiber is currently the only technology that can meet the requirements of the vast majority of schools,” reads the report.

The number of schools without fiber connections has been reduced by 45 percent in 2017, thanks largely to E-rate allowing funds to be used for fiber construction.

In Hawaii, Kentucky, West Virginia and Delaware, 100 percent of schools report the fiber connections needed to meet bandwidth targets. Other states are largely in the 90th percentile for this, with Alaska ranking lowest with 70 percent.

Also, $200 million in matching funds for fiber have been put up by legislators in 18 states, EdSurge reports. However, 2,049 schools (with one located in nearly every state) still need fiber connections.

“We need to see the FCC take a much more proactive approach to getting fiber to these schools,” says Marwell in an EdSurge interview. 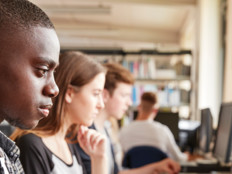