When it comes to choosing an ed tech tool, teachers and administrators are looking for reliability, effectiveness and ease of use, a report from EdWeek Market Brief revealed.

The survey asked a thousand educators and administrators which ed tech company they would choose to help improve student achievement in their districts and why. About 52 percent of respondents say they trust Google for its ease of use, established name as a provider of ed tech and the effectiveness of its products.

“If one thing is clear from the survey, it is that Google is becoming the dominant player in the ed-tech market,” reads the report. “Our past research suggests that a company’s ability to help move the needle on student achievement is the single biggest driver of ed-tech purchasing and perceptions.”

This trust in Google by teachers and admins is reflected in their choice of ed tech tools. Roughly 42 percent of the educators surveyed indicate that they most frequently use Chromebooks in the classroom and 68 percent say they use G Suite for Education or Google Classroom as their productivity tool.

Schools have consistently chosen Chromebooks for its continually updated features — like the latest media literacy apps — and its built-in security features.

The domination of Chromebooks in the ed tech market seems to have staying power too. About 90 percent of those surveyed say they plan to increase their districts’ investments in the tool.

The one-two punch of Chromebooks and G Suite apps, such as Google Docs, Slides and Sheets, has helped many schools improve their students’ learning outcomes and has boosted students’ ability to learn outside of the school walls.

“One of the key elements of having [Chromebooks] in the school is that students can use them whenever, wherever,” Jason Klein, the assistant superintendent of Maine Township High School District 207 in Illinois, tells EdTech.

Students in Klein’s district come from various backgrounds. For about 60 percent of them, the Chromebooks serve as their primary computing device at home. Since rolling out the devices, Klein tells EdTech that students’ grades and scores on standardized tests have outpaced other districts in the area.

Another recent survey revealed Google Classroom (and G Suite) as the most popular productivity suite, likely because the tools fit perfectly with the top priorities that educators projected for the incoming school year. Priorities include increasing student productivity and efficiency as well as creating authentic connections between students’ everyday lives and the classroom. 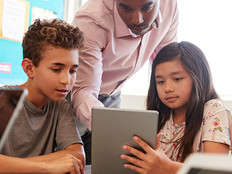