With 99 percent of U.S. classrooms headed toward robust internet connectivity within four to five years, the next challenge is making sure students who are assigned digital homework have a way to do it. That was the overarching theme of Monday’s session, “Join the Digital Equity Action Agenda and Narrow the Homework Gap,” led by Consortium for School Networking CEO Keith Krueger at ISTE’s 2017 Conference & Expo in San Antonio. 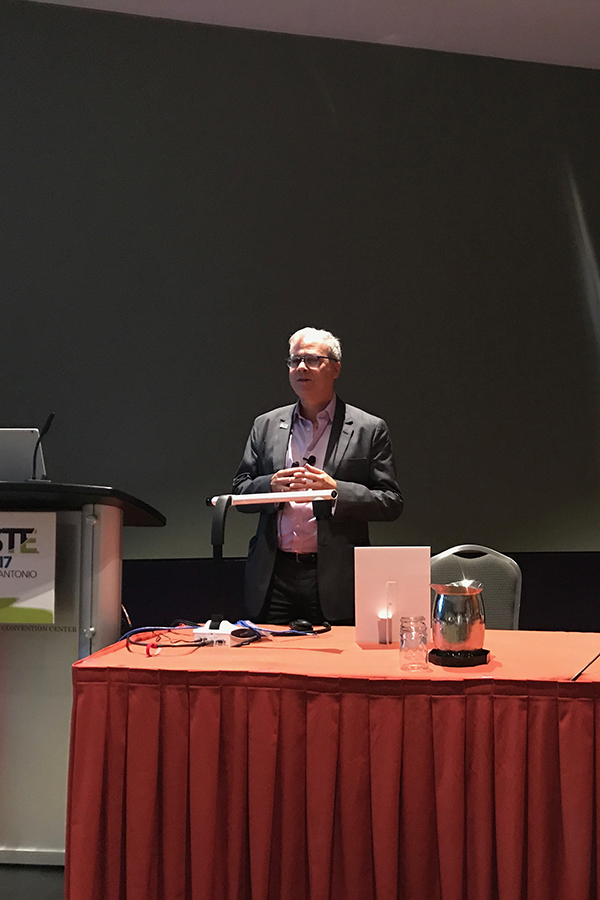 Adams said he had great success in California’s Coachella Valley Unified School District by parking Wi-Fi–enabled school buses in poor neighborhoods and pushing the community to take on a land tax to fund a one-to-one device program.

“We had only one way to go, and that’s up. But, those students are able to do just about anything now,” Adams said about his students, who were only graduating at about a 70 percent rate before access to the internet. “We eliminated the digital divide and the homework gap. All the challenges we have; they’re opportunities. And our students are now graduating at 80 percent — all because the technology had opened the way.”

Education has gone digital. “It’s no longer a ‘nice to have’,” Krueger said.

Still, he said, despite $4 billion being spent yearly to improve internet access to schools, the digital divide remains.

“Five million households with school-aged children — low-income households that are disproportionately black and Hispanic households — make up a large share of that five million,” Krueger said. “And yet 75 percent of school systems don’t have an off-campus strategy for providing connectivity to students at home and after school.”

The issue extends beyond the school district Krueger said.

“Digital equity is a community problem,” he said. “It’s not something that schools alone should solve.”

The district redesigned its curriculum but spent 18 months planning before rolling out the accompanying technology.

“We knew we had to go slow in order to go fast,” Dance said. “We had to be very strategic with it. This was not just about putting technology in the hands of kids.”

There were eight parts, but the most important, Dance said, was getting the story out.

“Folks kept saying you’re just giving computers to kids,” he said. “When you don’t communicate your story, someone else will.”

In Los Alamos, where 42 percent of the parents have doctorates and the other part of the spectrum is in high poverty, Steinhouse followed six steps for his digital strategy.

To follow more coverage from ISTE 2017, check out the EdTech’s event page.