It’s not unusual for internet traffic at Chattanooga’s Baylor School to reach upward of 2,000 users — unless, of course, the clock at the private prep school has struck midnight. That’s when the school administrators freeze online access in the six dormitories on campus.

“It’s not a popular policy among our boarding students,” says CIO Shawn Arrington. But parents of the school’s 200-plus boarders undoubtedly sleep more soundly knowing their kids don’t have free rein to wage Xbox wars, hunt for Pokémon or post Snapchats into the wee hours of the morning.

At all other times, Baylor’s bandwidth burgeons. With an enrollment of more than 1,100 students in grades six through 12, the campus has two peak traffic periods: the end of the school day, when some 900 students must coordinate with parents for pickup; and sporting events, which routinely draw thousands of spectators. “There are a lot of parents who take advantage of the wireless coverage in our football stadium and at the field we use for pre-event tailgating,” Arrington says.

Indeed, Baylor finds itself among a growing number of K–12 schools embracing an anytime, anywhere approach to online access. While the proliferation of technology within the classroom has made it customary for districts to provide some form of entrée to the internet, many are now faced with the task of revamping existing wireless networks to optimize manageability and accommodate the explosion of mobile devices across all campuses.

The upsurge in mobility, combined with declining IT budgets, has made IT leaders increasingly open to students leveraging personally owned devices on campus, according to findings from research and advisory firm Gartner. Furthermore, research underscores the power of mobile technology to enhance the K–12 learning environment. In fact, a five-year study by the Research Center for Educational Technology at Kent State University found that hand-held devices improve student motivation, engagement and problem-solving abilities.

Avni Rambhia, an analyst with Frost & Sullivan, agrees: “School districts want the benefits that come from providing self-paced curriculum, but in order to get them, they must invest in BYOD and wireless solutions." 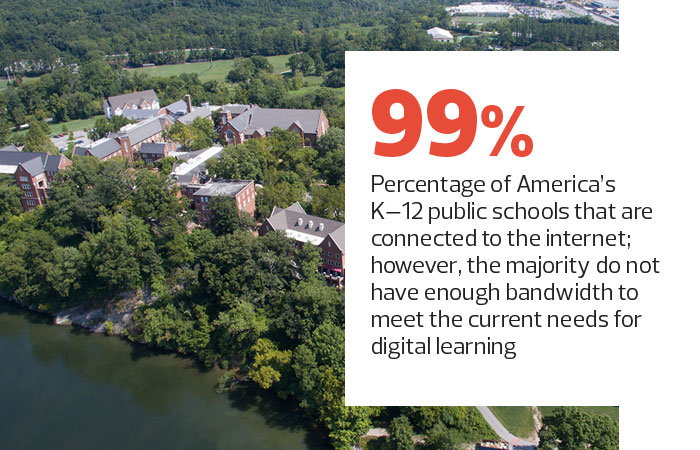 This was the case for Pennsylvania’s Quakertown Christian School, which upgraded to the EnGenius Neutron Series wireless management solution last summer in preparation for adopting a cyber-based curriculum at its high school. Supporting some 250 faculty and students on a sprawling site that encompasses separate preschool and K–12 buildings, Quakertown Christian needed a robust, scalable solution that could facilitate reliable, invisible coverage, according to IT Director Ken Herr.

“Students expect to have it, just like heat, lights and flushing toilets,” he says. “My goal is to make it invisible.”

“Students use portable devices at home, and they expect the same level of performance when they bring them to school,” he says. “And we need to ­provide that service in a structured, managed environment.”

Heavy device use certainly drives schools to keep up. “One of the challenges of our one-to-one program is making sure the network resources are always available to our faculty and students,” Arrington says, noting that the majority of Baylor students bring three devices — a notebook computer, tablet and smartphone —to campus each day. Furthermore, many boarders also connect online gaming consoles within the dorms. “When we upgraded, we wanted to be able to handle that load and be scalable.”

The decision to capitalize on the popularity of the bring-your-own-device (BYOD) trend was a key factor in Baylor’s decision last year to bolster its existing Fortinet wireless solution. By installing a FortiGate 1000 Series firewall and deploying more than 100 TP-LINK wireless routers throughout the dorms, the school dramatically improved availability and performance.

Saint Bernadette School in Westlake, Ohio, had similar objectives when officials embarked on a wireless infrastructure overhaul in 2014. The K–8 private school experienced dead zones, access point hopping and insufficient bandwidth while attempting to roll out a one-to-one tablet program. Those problems prompted the decision to deploy access points across the entire property, including in classrooms, the cafeteria and the gymnasium.

As a result, Saint Bernadette’s can now assign a tablet to each student and teacher, without having to worry about the number of available wireless connections or bandwidth restrictions.

Regardless of how a school’s network needs and administrative goals may shift during the course of a day, the IT team must be able to execute mobility tasks flawlessly.

“The Neutron Series solution has allowed me to have a single point of control and monitoring,” Herr says. “As an outgrowth of that, I’m able to offer reliable services to the classrooms and beyond.”

“Now, we have very few problems with students connecting to the network,” adds the Baylor School’s IT Director Chuck Thompson. “And we are able to block torrent [traffic] to cut bandwidth use and illegal content.”

With that improved visibility, Baylor School administrators can easily prioritize traffic, such as increasing bandwidth for live broadcasts of fall football games. Before the upgrade, the school routinely encountered bottlenecks during snow days and weekends when the boarding community was streaming videos or playing online games.

“It’s given us another layer in our ability to look at traffic and be able to make decisions,” Arrington says. 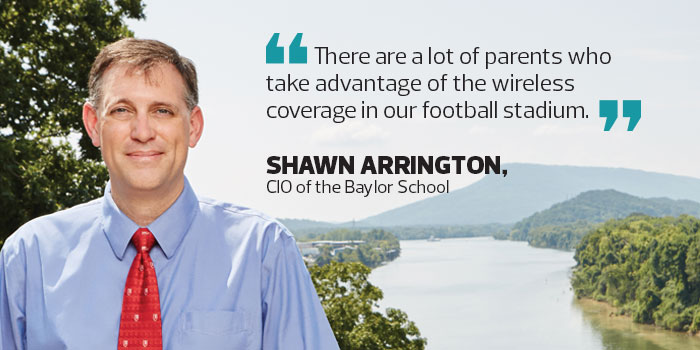 Anytime, anywhere access for schools extends far beyond athletic events and dorm room distractions: Technology is a staple of daily learning. And when it comes to measuring the success of wireless upgrades, the proof is in the pupils.

For example, using the internet, students in the Baylor School’s language department listen to the news from Paris, virtually visit classrooms in Beijing and tour the Prado Museum in Madrid. Many teachers also incorporate blogs, wikis and Moodle forums into their curricula.

“Our network can be segmented off as needed for educational purposes, and we can easily filter content to ensure devices aren’t accessing nonacademic sites,” Arrington says.

At Quakertown, the benefits of the improved network extend even beyond the students. “The ability to provide reliable, high-speed network connectivity that meets our instructional needs is crucial,” Herr emphasizes, “but my goal here as an IT person was to make my position unnecessary. IT at the school should be as seamless as heat, light and running water — it should just work. And now it does.” 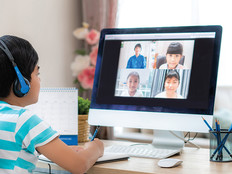