Presenting to a packed house at ISTE 2016, educational technology expert Jason Ohler asked educators to dig deep and consider how they want to influence their students’ lives.

“Be a door-opener,” said the professional speaker and author. “Discover what is now important to you as a teacher.”

But that was just tip of the iceberg.

Ohler’s Tuesday afternoon session, Five Trends that Bend, would offer much more than a pep talk: It presented a sweeping view of current and emerging technological trends that are shaking things up in the K–12 space.

Big Data, combined with predictive analytics, has great potential to personalize learning and bring students up to speed in exactly the areas where they’re falling behind, Ohler said.

But there’s a caveat: “Big Data has hit education and unless parents and students have some sort of input into who sees it, when you can sunset it, and so on, I wouldn’t buy into it,” he said, adding later: “You’ve got to make sure it’s being used as advertised.”

Ohler broached the subject of AR with a nod to pop culture.

“We’ve absolutely entered the Matrix, ladies and gentlemen,” he said. “A really low-level version, but it is here.”

As an example of one of AR’s educational applications, Ohler cited a student art exhibit he hosted. The ARt gallery, as it was called, required patrons to view each piece through their phone to juxtapose the real-life artwork with a complementary piece of art stored in the cloud.

“I assure you I had no problems with student engagement on that project. They absolutely loved it and it stretched them in ways they didn’t even know they could be stretched,” he said.

The web has evolved tremendously since its creation, Ohler says. It has moved incrementally from Web 1.0 — in which big computers fed little computers information — to where we are today, Web 4.0.

“Web 4.0 is actually when things connect,” Ohler explained. “And everything is going to be connected.”

Ohler claims the driving force behind bring your own device (BYOD) is actually pretty simple: “Everybody wants their own individualized workspace,” he said. “That is the heart and soul of the BYOD movement.”

The decision educators need to make is whether to support students on their BYOD journey, helping them make distinctions between their real lives and their digital lives.

His take? “I want them to bring their gear to school,” he said, “because I want to help them get through those very interesting, convoluted ethical issues.”

Despite earning a place on the list of Trends that Bend, transmedia storytelling is underutilized in education, Ohler said.

“Transmedia is offering us the greatest portal into the multi-universe we want for our kids,” he said, adding that “we’re largely ignoring it.”

If used properly, transmedia would give educators and students the opportunity to tell stories in a variety of ways and span the gap between critical thinking and creative thinking, forming a new and exciting middle ground: “creatical thinking.”

Learn more about Ohler’s thoughts on education by visiting his website, or head to EdTech’s event coverage page for more news from ISTE 2016. 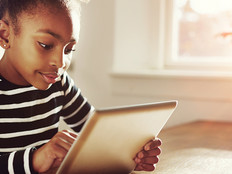