Teachers can get their first peak at the latest education-focused version of Minecraft — for free.

Yesterday, Microsoft kicked off the Minecraft: Education Edition early access program, which allows teachers to test the game at no cost up until its official release in September. After that, schools and districts will have the opportunity to purchase annual licenses for between $1 and $5 per student.

Set Up for Success

Microsoft’s Minecraft: Education Edition will likely capitalize on the popularity of its predecessor, MinecraftEdu. That modified version of the game was designed in 2011 by Finland-based TeacherGaming LLC, with the goal of promoting problem-solving skills and collaboration.

“We’re a high-achieving district and our parents have high expectations,” said instructional technologist Jason Schmidt in a 2015 interview with EdTech. “We’re not just using tools like Minecraft because it’s a fun thing to do and the students enjoy it; we’re doing it because we’ve found they learn some things more effectively by using them.”

Hoping to replicate that success, Microsoft acquired MicrosoftEdu back in January and immediately reached out to creators Joel Levin and Santeri Koivisto for help in developing the next iteration of the game.

Features Fit for the Classroom

In the end, Microsoft developers included all the original features found in MinecraftEdu, as well as additional functions designed to improve collaboration and enrich learning. According to the Minecraft: Education Edition website, those features include:

Educators also have access to lesson plans and other resources and can participate in events and workshops, such as the Minecraft: Education Edition Teacher Academy, offered at this year's ISTE conference. 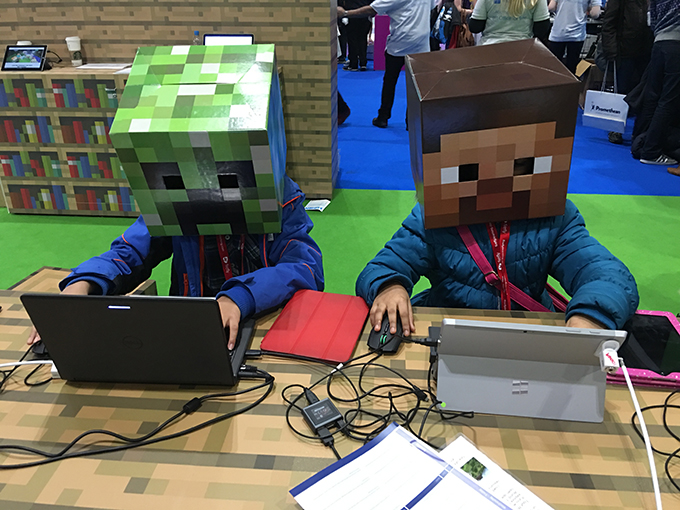 Students play Minecraft at an education technology even in the UK. Source: Microsoft

Teachers who want to bring Minecraft: Education Edition to their classrooms will first need to upgrade their computers to either Windows 10 or OS X El Capitan. Using their school or district email account, they can then sign up for a free Office 365 Education account and download the newest Minecraft release.

Steve Isaacs, a game design and development teacher from William Annin Middle School in Basking Ridge, N.J., told Microsoft he was able to get his students logged in and playing the beta version of the program within 45 minutes of receiving the download.

“I was impressed with how easy Minecraft: Education Edition was to set up,” he said.