The makers of Minecraft are going all out on education, with a new release of the game designed for classrooms scheduled for release later this year.

The building-block and exploration video game has swept the world, with more than 70 million copies sold. In 2011, Finland-based TeacherGaming LLC modified the game, with the classroom in mind, to create MinecraftEDU. Since then, the game has been incorporated into STEM courses, history and geography lessons, and more.

This week, Microsoft announced that it had acquired MinecraftEDU and would release a new version of the game, named Minecraft: Education Edition. Microsoft's new edition will have a few special tools and hooks designed specifically for the classroom — and the company wants to continue building from there, according to a post on the game’s website.

“One of the reasons Minecraft fits so well in the classroom is because it’s a common, creative playground,” said Vu Bui, COO of Mojang, the company that created the original Minecraft, in the post. “We’ve seen that Minecraft transcends the differences in teaching and learning styles and education systems around the world. It’s an open space where people can come together and build a lesson around nearly anything.”

The new edition brings a library of lesson plans that guide educators through the process of implementing Minecraft play sessions to meet classroom needs and provides an online community, with resources such as a Minecraft Mentors section, that allows veteran Minecraft educators to help orient those testing the waters for the first time.

“In education, we are constantly seeking pathways to explore learning beyond the confines of a textbook. Minecraft allows us that opportunity,” said Rafranz Davis, executive director of professional development and learning at Lufkin Independent School District, in the post. “When we see our kids enjoying the process of learning in this way, it’s a game changer.”

In Nebraska’s Bennington Public Schools, games are tied closely to the curriculum and learning objectives.

“We’re a high-achieving district and our parents have high expectations,” said instructional technologist Jason Schmidt. “We’re not just using tools like Minecraft because it’s a fun thing to do and the students enjoy it; we’re doing it because we’ve found they learn some things more effectively by using them.”

Minecraft: Education Edition is slated for release this summer. Users of MinecraftEDU will have access to the new game for free for the first year. Learn more about the game on the official website. 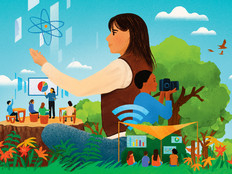