Printed textbooks continue to be a staple in schools, but advances in e-readers are edging the eventual shift to devices closer to reality.

Amazon is extending its e-reader revolution by reaching out to schools with an update to its free online tool Whispercast.

What Does Whispercast Mean for Schools?

First introduced in 2012, Whispercast helps organizations distribute and manage content and apps for e-readers and any other device that supports the Kindle app, making the tool extremely adaptable. As a result, it can upload thousands of e-textbooks and learning materials to thousands of student and faculty devices simultaneously.

Nationwide, Whispercast is used in more than 130 of the 250 largest school districts and at 24 of the 30 largest universities, according to an Amazon press release.

Making the platform even more enticing to educators, Whispercast’s 3.0 update in April introduced a new migration option, Digital Transition Services. It’s part of Amazon’s pitch for making its service a launching point for educational content by easing schools through the transition to the digital marketplace.

According to Amazon, its service representatives will “assist with onboarding and implementations at scale, based on best practices.”

Rohit Agarwal, the general manager of Amazon Education, tells GeekWire that putting devices into the hands of all students is “a great starting point,” but using the technology requires an extra step. And that’s where Digital Transition Services comes in — helping schools overcome the barriers of migrating their existing content to devices.

It’s not the first time this year that Amazon has made waves in the educational technology market. In January, the company announced it was adding an education genre within its Kindle Direct Publishing service, along with a beta for its Kindle Textbook Creator.

The tool expands the existing digital textbook marketplace, currently dominated by publishers, by allowing authors to prepare and publish their own digital materials through Amazon. 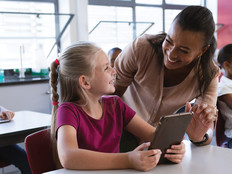