Sometimes, school districts need to seek out inexpensive management tools because their budget covers only the bare necessities.

Clark says Meraki MDM lets the Battle Ground IT department assign and revoke applications from the app stores of the major platforms, reset PIN codes and remotely wipe lost or stolen tablets as long as they are registered on the district’s network.

While Battle Ground Public Schools explored other mobile management tools, it decided to stick with Meraki’s service because it meets their current needs and is free.

“We decided it was more effective to pay the $100 support fee to Meraki in the event we needed it, but we haven’t had to yet,” Clark says.

Of course, as more mobile devices join the network, Clark expects he will eventually need to deploy a more robust MDM solution that can scale across hundreds, if not thousands, of new users.

Chris Silva, a Gartner research director, says software makers have done a lot of work to tie together many of their security offerings. “When organizations go with an existing security vendor or adopt a bundled suite of mobile management tools, they may find some preferential pricing or that the MDM and mobile application management features are included,” Silva says.

Todd Hindmon, executive director of technology for the Douglas County School System in Douglasville, Ga., says the district has taken a hard look at available MDM software and features and for now, at least, has passed on the technology.

“We haven’t found the perfect solution that can manage to the scale we need with 35 sites and 24,500 students,” he says.

“In the long run, we do want to do MDM, but our biggest challenge is price,” Hindmon says. 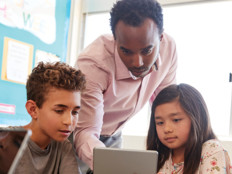