The Camas School District in Washington took a clever approach to power and cooling management.

Recognizing that funding was limited, Technology Director Sherman Davis says the district opted for a combination of server virtualization and more effective management of uninterruptible power supplies and air conditioning to reduce energy costs. The combination saved about $1 million, Davis says, which freed up money for 2,000 mobile devices and educational applications.

“Now, we can let our three air conditioners take turns during the day,” Davis says. “We used to have two going all the time to keep up with the heat.”

The district also integrated its APC Symmetra UPSs with the network, says Davis.

“With the UPS integration combined with the network monitoring tool we use, the system alerts us if the temperature goes up or down,” he says. “It also monitors the switches and servers, so we receive alerts before any of the equipment goes down.”

David Cappuccio, a managing vice president for Gartner and chief of research for the infrastructure teams, says more school districts are taking a closer look at power and cooling.

“The idea is to bring the solution to the problem,” he says. “Why cool the entire room when you can focus on cooling the equipment where the heat is coming from? We’ve seen organizations reduce their power and cooling costs by as much as 30 percent.”

Steve Bratt, manager of technology operations for Vancouver Public Schools in Washington, says the district built a second data center about 18 months ago when it outgrew its main facility. The IT staff supports about 25,000 users overall, roughly 22,000 of them students.

Bratt calls the new space a “load-balanced” data center that serves as a redundant facility. “With virtualized services, we can share the processing between the two data centers, but still manage the spaces separately if we need to do maintenance or have an outage affecting one room,” he says.

Bratt decided against deploying in-row cooling, preferring a hot aisle/cold aisle setup to feed cold air to the front of the racks and remove heat from the back. The district also deployed APC Symmetra uninterruptible power supplies. 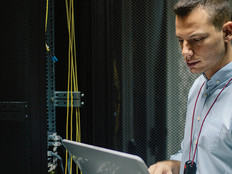