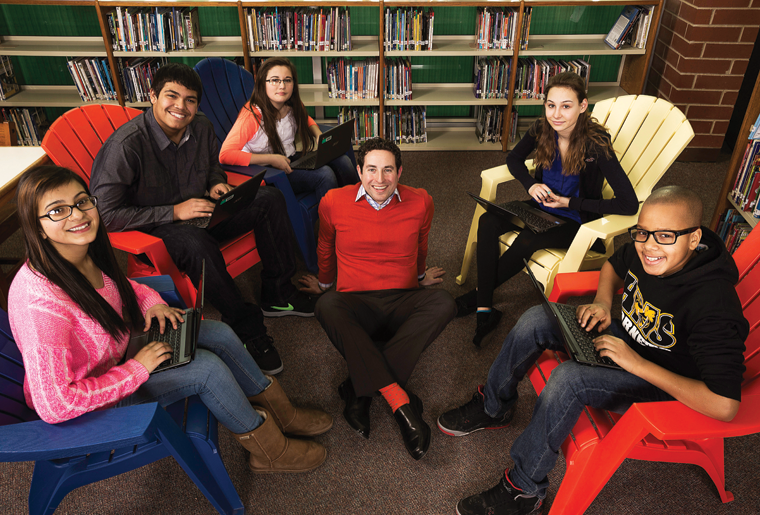 “Having one-to-one devices — and through them, ­access to information — makes a tremendous difference in achieving our vision of what student learning looks like,” says Dr. Jason Klein, CIO of the district, which encompasses 13 elementary and middle schools in Arlington Heights, Buffalo Grove, Mount Prospect and Wheeling, Ill.

One recent exercise in authentic learning involved selecting the device to be used in the middle schools’ nascent one-to-one program, with 55 students from Holmes Middle School helping CCSD21’s Information Services department test and rank an array of notebook computers, tablets and Chromebooks. The initiative gave students an opportunity “to acquire the research, presentation and high-level thinking skills we want them to learn,” Klein explains.

Participating students evaluated the devices before making a recommendation to a committee composed of teachers, administrators and IS department staff. Together, the groups presented their findings to the board of education, which signed off on the decision.

Involving students and staff in decision-making fosters a sense of ­community and a commitment to change. Here’s a blueprint for how to do it well, based on CCSD21’s experience.

CCSD21’s IS team did the upfront work of determining which categories of devices would be considered.

The evaluation process should include hands-on testing — and that, Klein says, is where the relationships that the IT department already has cultivated with vendors and solution providers is critical. Before IT leaders consider bringing others into the decision-making process, they need “to be able to trust that these experts will give non-IT participants honest advice,” he says.

Students need to be fully invested in the success of the project in which they’re participating. “You have to show kids what they’re trying to solve — and for whom — up front; that’s where the ­motivation comes in,” Klein explains.

IT departments that focus primarily on the technology rather than on how to tie it into the curriculum and assessments would do well to “seek out partnerships with instructional leaders as a first step to engaging the kids,” he says.

Classroom leaders agree that such outreach can have a profound impact.

“When the students had the chance to add technology and be influential in that process, it was very exciting and powerful for their learning,” says Christine Mantell, a seventh-grade teacher at Holmes.

Students were divided into groups, each tasked with evaluating one of the five categories of devices. They researched “everything from cost and warranty to network and systems management capabilities to how the devices could be used instructionally,” Klein says.

One requirement, for example, was that students be able to use the chosen device for online testing. “It turned out that they weren’t sure they wanted to take tests on tablets because the devices don’t have a physical keyboard,” he continues. They also knew that having a separate physical keyboard would add cost and complexity.

To help students develop technical expertise, Klein recommends that IT leaders connect students with real experts. In this case, he turned to CCSD21’s solutions provider, CDW•G, which recruited representatives from its vendor partners — and offered up its own reps — to visit the school during the device evaluation process.

Klein also arranged a trip to CDW•G’s office in nearby Mettawa, where students met with the manufacturers of the devices they were evaluating to make a decision about which one to recommend. The vendors, which offer both Windows and Chrome platforms, included Acer, ASUS, Lenovo and Samsung.

“Each student may want to advocate for the product” that his or her team was assigned to evaluate, Klein says. But to be an expert, “you have to understand the pros and cons, weigh those against other options and, as a group, find the best solution for the intended audience.”

Meeting with makers of unfamiliar products helped students better compare all of the devices in contention and choose the best option, says Elizabeth McGann, another seventh-grade teacher at Holmes. “Having students not only participate in a research trip, but also have time to reflect on it, is critical in a project like this,” she says.

McGann says that a video chat with vendor representatives would work just as well. Regardless of how the interaction happens, Klein stresses that it shouldn’t take place until students have concluded their own research and hands-on experimentation. That way, he says, “they have the background knowledge to ask more sophisticated questions and can then synthesize and evaluate the information they receive with what they already know.”

The staff committee followed a similar process, but with less vendor involvement. Having previous discussions about the devices with the students made it easier to efficiently answer staff questions, Klein explains.

In the end, the majority of student groups and the staff committee ­con­­cluded that a Chromebook would best serve their needs. Once they chose the Acer Chromebook C710, “we had our marching orders to nail down the specifications,” he adds.

They also readied for the board a recommendation for a similar Chromebook from another vendor, in case concerns about Acer’s service or support emerged.

“In the final phase, it was back in our hands,” Klein says of the device selection journey. “But the staff and students owned it.”