Jorge Arteaga: “It doesn’t matter what device you have as long as you have access to the [educational] tools you need."

When students walked into El Capitan High School for the first time last August, it wasn't just the start of a new school year. Their learning experience was about to change radically.

The new $98 million campus in ­central California's Merced Union High School District was designed with mobile technology and digital ­content in mind. Wireless access points are installed in every classroom, and instead of textbooks, the school's ­inaugural freshman and sophomore classes were issued Samsung Chromebooks; or, if they preferred, they could bring their own devices.

The technology allows educators to move away from traditional lectures and focus more on individualized and project-based learning through the use of cloud applications (Google Apps for Education, for example) and online content, such as electronic textbooks and educational videos, says Jorge Arteaga, MUHSD's ­technology director.

"We wanted to create a college-like atmosphere, where students can come to school and work on their devices," Arteaga says. "Students collaborate and share resources. Teachers check for understanding via online ­quizzes and adjust instruction on the fly. It's so powerful."

Powerful — and ubiquitous. In fact, how schools respond to mobile devices' proliferation will affect ­generations of students and their readiness for college and the workforce. It also impacts how well teachers, administrators and staff do their jobs.

"What started out as resistance to using mobile ­technology has turned to increasing acceptance. It's a pretty rapid change," says Peter Grunwald, founder and ­president of Grunwald Associates, a market research and consulting firm that has studied mobile learning in K–12 classrooms. "Mobile devices have extraordinary value from an instructional standpoint if they're used intelligently. And with all this ownership of mobile equipment, students go to school expecting a [high-tech] environment."

For mobile learning to work, schools need a strategy for issuing, managing, securing and teaching with school-owned or personal mobile devices — or both. IT departments must invest in network and wireless infrastructure to ensure that teachers and students have all the bandwidth and online resources they need to do their jobs and schoolwork.

El Capitan High School, for example, has become the first MUHSD school to implement what district leaders are calling a "one-to-web" environment. Rather than a one-to-one initiative, the district equips all students with school-issued Chromebooks or allows them to bring their own mobile devices so they can access all the educational resources they need over the web — anytime, anywhere.

The reliance on mobile devices and the Internet, combined with the need to prepare for Common Core–mandated online assessments beginning in the 2014–2015 school year, has made network bandwidth and ubiquitous wireless Internet access at all 10 of the district's schools in Atwater, Livingston and Merced a priority.

"In planning our infrastructure, we determined we needed 10 times the bandwidth we had at the time," Arteaga says.

Next, the IT staff installed Cisco Catalyst 3850 edge switches and Cisco Aironet 3602e and 3602i Series wireless access points in each of El Capitan's 86 classrooms. To eliminate potential network bottlenecks, each edge switch has 10Gbps uplinks to the school's core switch. "We can get 40 students per class running on YouTube at the same time with no lag," Thomas says. The district isn't done ­bolstering network speeds and is currently upgrading its Internet connection from 1Gbps to 10Gbps.

As for security, the beauty of Chromebooks, Google Apps and free online educational content is that El Capitan students never touch the internal network because everything is web- or cloud-based, Thomas says. Students with Chromebooks log in to a WPA2-encrypted Wi-Fi network; those using personal devices connect to a guest network. Teachers and staffers, meanwhile, connect to a different Wi-Fi network that gives them access to internal servers.

To ensure acceptable use, web access is filtered, and students must sign a responsible-use policy that tells them what they can, should and shouldn't do. Through a Google Apps domain, the IT staff pushes out approved apps to Chromebooks and prevents students from downloading unapproved ones.

The district also requires each freshman to take a digital citizenship class. "They learn about cybersafety, what it means to be on the Internet and the implications of what they do," explains Technology Integration Specialist Tiffany Pickle.

MUHSD will soon convert its other high schools to the one-to-web model. Within two years, district leaders hope to use E-Rate funding to upgrade each remaining school's network equipment and Wi-Fi and buy enough Chromebooks to equip every student with a device. They already have purchased 2,400 Chromebooks for the remaining schools and aim to acquire 3,000 more by 2015.

In the meantime, about 94 percent of El Capitan's nearly 800 students are using Chromebooks; the rest are using their own devices. Students, educators and parents alike are giving the mobile initiative a thumbs up.

"Students like the convenience of accessing information online and collaborating with their peers," Arteaga says. "The learning process has extended beyond the regular school day as they use their devices to communicate with teachers on their assignments." 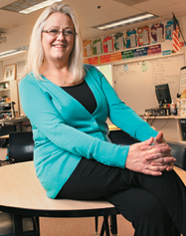 "Everything we do is student-centered, results-oriented, community-connected and learning-focused," says Lake Washington School District's Sally Askman. "We believe the mobile strategy helps us meet those goals."

A Phased Approach to Going Mobile

Lake Washington School District's mobile transition also took several years to implement. It required the deployment of new wireless and mobile technology by the IT department; the hard work of school administrators, staffers and teachers who are embracing a new style of teaching and integrating mobile ­computing into the curriculum; and the backing of local voters, who passed a 2010 levy to pay for the technology.

The levy allowed the IT department to replace an existing 802.11a/b/g network that was too slow and had too many dead spots with a faster Cisco 802.11n network that provides full coverage in each of the district's 51 schools in Redmond, Kirkland, Sammamish and Woodinville, Wash.

The levy also allowed Lake Washington to launch a one-to-one notebook computer program for its middle and high school students and to purchase carts of ­netbooks for elementary school students to share. In three years, LWSD officials purchased enough ­netbooks to provide a 3-to-1 student-to-computer ratio for K–2 students and a 2-to-1 ratio for students in grades 3 through 5.

"We're seeing a shift from an all-paper-based ­curriculum to an increasing dependence on web-based and digital" materials, explains Sally Askman, the ­district's director of technology. "That requires mobile devices and a wireless network that's highly available and resilient, with the appropriate security in place."

Because the district owns its own fiber, it already had plenty of bandwidth. To prepare for the wireless network, the IT department in 2011 added a second Cisco Catalyst 6509-E switch at the core and upgraded 750 of the district's 1,050 network edge switches with new HP switches.

When LWSD launched its one-to-one initiative during the 2012–2013 school year, the IT staff rolled out 9,000 Lenovo ThinkPad X131e notebooks over five to six months to ensure that the network equipment and Wi-Fi network could handle the load, Askman says. "We got a chance to see what pressure was on the network in September, and we made adjustments for the next phase," she says. "We had to adjust the size of our [Dynamic Host Configuration Protocol] scopes, for example, so that enough IP addresses were available for the student devices joining our wireless network."

Askman plans to make additional network improvements in the years ahead. The next school levy in 2014 would allow the district to upgrade its network further, eliminate single points of failure, improve speed and implement additional security safeguards, she says.

Wisconsin's six-school Oregon School District has come a long way since the early days of Wi-Fi, when it relied on unmanaged, off-the-shelf 802.11b access points.

Technology Director Jon Tanner upgraded to a Cisco 802.11g managed wireless system in 2007 and expanded it in 2009 when the district embraced BYOD. With demand for network capacity continuing to skyrocket, the district upgraded again last summer.

52% of BYOD participants use more than one device.

"We had the coverage, but we didn't have the capacity to handle the huge densities of clients trying to log in," he explains. "A wireless access point can provide an individual client with 300-megabit-per-second speeds, but if you can only connect back to the switch at 100Mbps, it's a huge bottleneck," he says. "We are now getting full wireless throughput."

To increase network bandwidth, the district spent nearly $500,000 to upgrade its networking equipment and Wi-Fi network with the latest Cisco technologies. Fifty of the district's 62 edge switches had only 100Mbps of throughput, so Tanner replaced them with new 1-gigabit Cisco Catalyst 2960 Series switches. The upgrade has improved speeds dramatically, he says.

The district also purchased new second-generation Cisco Aironet 2602 access points and two Cisco 5760 wireless LAN controllers for redundancy. With the upgrade, it more than doubled its access points — from 75 to 168.

To begin, Tanner's team hired a third party to ­perform a wireless site survey, which included the use of heat maps to pinpoint where coverage was and wasn't available and ultimately provide full Wi-Fi coverage at each school. Tanner then studied usage reports from the district's previous wireless controllers, which showed how many mobile devices were accessing each access point at any given time, as well as the number of devices that were denied access because the access point was overloaded.

With this data, Tanner made educated guesses on how many access points should be installed in each area to optimize their placement, he explains.

Oregon School District has spent the past three years making plans to move education from traditional ­lectures to more personalized learning, and for that to succeed, wireless technology and mobile devices are critical. Now, with the infrastructure in place, the ­district can ramp up its efforts.

"We were dipping our toes with BYOD before because we didn't want students to have trouble connecting to the network or have slow network access," Tanner says. "But now, we feel we can really tell students to bring their own device — and they will actually be able to use it.

Tiffany Pickle, a technology integration specialist with central California's Merced Union High School District, regularly provides training during both the summer months and the school year. Sometimes, she says, teachers struggle with the pedagogical changes and how they impact classroom management. Because follow-up support is critical, she and librarians who are well versed in technology are always available if teachers have questions, she says.

It's equally important for teachers to meet and consult with each other, Pickle adds. "We've seen increased collaboration among staffers and sharing of ideas. That's really helped drive a lot of our mobile learning success."