Peter Estacio is helping Aspire Public Schools ready for the online testing component of the Common Core State ­Standards Initiative by focusing on the technology improvements that need to happen anyway.

Aspire Public Schools of Oakland, Calif., has always focused on using student data to target and support learning, so the nationwide rush to prepare for the online testing component of the Common Core State Standards Initiative isn't keeping Director of Technology Operations Peter Estacio up at night.

Devices must be acquired and the infrastructure must be upgraded, of course, but Estacio and his IT team are confident that the district, which comprises 34 charter schools in six California cities, will be ready.

"My goal has been to address Common Core requirements by focusing more on the technology improvements that need to happen anyway," Estacio explains. "It's been an organic outgrowth of the process of equipping our schools with the laptops and network infrastructure necessary to support the educational mission."

SOURCE: "Education at a Glance 2012" (Organization for Economic Cooperation and Development

Coordinated by the National Governors Association Center for Best Practices and the Council of Chief State School Officers, the state-led CCSS initiative establishes clear benchmarks for what students should learn each year in English language arts and mathematics. As of November 2012, 45 states and three territories had adopted the standards.

Online assessment of student progress is a key ­element of the initiative. The goal, CCSS proponents say, is to provide performance data that educators can act upon quickly. But the clock is ticking: High-stakes tests that align with the standards are scheduled to begin in fall 2014.

In the interim — and despite tight budgets and small IT departments — districts around the nation are working to ready their infrastructures for online testing.

Among other things, Estacio is investigating authentication, single sign-on and password management solutions to address issues that have already surfaced in Aspire Public Schools's blended learning environment and will become more critical when all testing moves online. The district plans to deploy 802.11n wireless technology and 50-megabit-per-second Internet ­connections in all of its schools to provide plenty of wireless capacity and to ensure that the core network infrastructure can handle the increased load of the online exams.

"You can't just throw a lot of laptops out there and expect things to go smoothly," Estacio says. "I'm keeping an eye on solutions that will help us now and later, when the Common Core testing begins. The money we spend inside the schools will be for laptops, access points and faster switches. I'm not as worried about bandwidth because we can put more of that in place as needed."

Aspire Public Schools also has been moving steadily to cloud solutions, which not only provide secure repositories for student data but also give educators tools that can be used to access and analyze information and ultimately shape the curriculum.

"My advice to other districts is to take advantage of cloud services," Estacio says. Many companies are working to address the problem of how to increase the amount of data flowing into schools without increasing the number of people who are needed to manage that data, he adds.

As is the case with most IT projects, the key to successful online testing is finding the time to prepare adequately and the money to pay for ­additional equipment, says David Johnson, a senior analyst at Forrester Research.

"A big risk is underinvestment — not really thinking through the systems that have to be supported," Johnson says. "Another is being unrealistic about the timelines to implement technology and to train IT staff, educators and students."

Johnson cautions districts to avoid niche software and hardware and to look for vendors whose products are likely to be adopted as standards — a principle that should include the software used for testing, unless that choice is determined by a state or other testing consortium.

He also recommends implementing technology that will support mandated assessments but also ­further long-term educational goals. "This can be an oppor­tunity to add access to digital textbooks, multimedia resources and pathways for collaborative learning," he explains.

Like other districts in Florida, where state mandates have paved the way for Common Core requirements, LCPS has been phasing in online assessments over the past three years. To support the effort, Alton and his staff purchased approximately 10,000 Lenovo ThinkPad X131e notebooks for mobile computing labs, started rolling out a high-density wireless network, and upgraded the district's network infrastructure with Cisco Systems core routing and switching technologies. 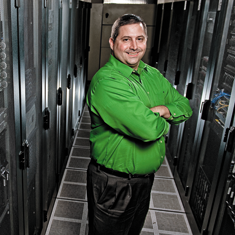 Dwayne Alton says most of Lee County Public School District's recent technology upgrades have been made with online testing in mind.

According to Alton, the district's revamped IT ­environment has actually leaped ahead of the legacy testing software used by the state, which was formatted for the lower resolution of older computers and is ­difficult to display on the new notebooks.

Still, he worries that the emphasis on assessment diverts funding and computing resources from larger goals. Although the new computing labs are nominally available for teachers to use for class work, the assessment schedule is so full that there are very few weeks, ­especially in secondary schools, during which the labs are free for instructional projects.

"Most of our recent technology upgrades have been aimed at testing — the sheer cost and volume of devices has been our biggest challenge," Alton says. "We used to use our network capacity for instruction and ­management, and now there are periods when it's ­completely saturated with testing. We're spending ­millions of dollars in order to accommodate online ­testing, but we're not dedicating similar funds to resources for instruction."

The transition to online testing is easier if districts re-evaluate solutions in light of current requirements, Alton continues. In the past, for example, districts were primarily concerned about coverage when rolling out wireless networks. But online testing should shift the focus to density and redundancy to prevent interruptions during assessments, he says. To ­streamline support, LCPS paid a little more for its mobile ­computing labs so that the notebooks can be updated and maintained in the carts.

To succeed, Alton continues, online testing must be planned for and executed carefully. "We have a testing coordinator in each school who makes sure that all of the tests are queued up and cached days ahead of time," he explains, "and then coordinators from the district come around and check their prep work. Most of our failures have been due to procedural issues."

The technical requirements of administering online testing are another hurdle that all districts must overcome, and for Glassboro Public Schools, it's one of the biggest. "We're trying to plan an infrastructure and delivery system for something, but nobody knows yet what it's going to be," says George Weeks, director of technology for the 2,300-student, five-school district in Glassboro, N.J.

New Jersey is one of 23 states involved in the Partnership for Assessment of Readiness for College and Careers (PARCC), a consortium that's developing English and math ­assessments for K–12 but hasn't yet released full ­technical specifications. "I'm going to move forward with my best professional assessment of where I want to take everybody," Weeks says of PARCC's role in ­shaping the district's online testing plan of action. "That should be more than capable of handling what PARCC is alluding to so far. If it doesn't, then we'll figure out the best way to integrate it when it hits."

The district has made great progress to date, he says. All buildings have high-speed, high-bandwidth Internet connectivity and are linked by a private fiber ring. A wireless network also is in place.

Weeks and his team have virtualized the district's data center, which provides flexibility as new technology requirements emerge, and they will replace many ­classroom desktop computers with notebooks in the year ahead. For now, they're holding off on adopting tablets until they can ascertain whether the devices are capable of running the requisite testing software.

Weeks worries that the web-based delivery model may fail, forcing districts to collect and process data that was supposed to be managed by PARCC. "I hope people who are pushing this forward understand that when thousands of children start taking tests at once, they will need Wall Street­–level transaction and processing capabilities."

Scaling Up with Online Testing

Already, the district has virtualized its data center using VMware technology. It provides sufficient bandwidth to support an online portal through which students, teachers, parents and administrators gain role-based access to data and computing resources. Current projects include wireless installations in all of the high schools.

"A main issue for us has been having enough devices — we prefer to do our testing in hard-wired labs," Karcher explains. "We're trying to use the wireless for instructional projects to free up wired labs and media centers for testing. We take the newer machines for testing, but that takes away from something else."

Karcher and her team also are concerned about whether the district's existing online testing model will scale to meet the needs of the CCSS assessments. "When you think about Common Core testing, it's ramping up the whole country at once," she says, "and I don't think the providers and vendors can keep up. Everybody's stretched. The basic software may be there, but the business analytics aren't in place. You're going to have a lot of issues besides having enough equipment. There has to be some infusion of funding to support this in the districts."

Despite the barriers, Supervisor of Network Services Santiago Vega believes online testing will be worth the struggles. "This isn't a one-shot deal," he says. "Testing is so important to us, to the students, to the schools. Teachers see the test results right away, and they're ­making interventions the next day."

To meet the needs of online testing, most school districts face complicated decisions about the number and type of computing devices they can make available to students, says David Johnson, a senior analyst at Forrester Research.

When considering new hardware purchases, Johnson recommends moving to tablets. "New platforms are easier to manage and support, and they offer a better user experience through simplicity," he says.

The calculations that lead to purchases will vary by district, of course. For Peter Estacio, director of technology operations for Aspire Public Schools in California, a history of satisfaction with a product or a vendor is important. (He ultimately chose Lenovo notebooks for that reason.)

Other factors to consider when comparing devices include: