Students spend an average of six hours a day at school, with most of those hours spent behind a school desk. By design, most school desks encourage students to sit still. And as a classroom staple, desks tend to become a home away from home for students.

Wander down memory lane, and take a look at the evolution of the school desk, from the late 1800s to the present. 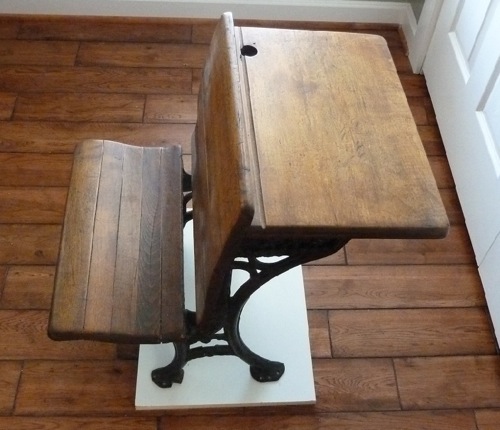 The Sidney School Furniture Company, located in Sidney, Ohio, began manufacturing the popular “Fashion” school desk in 1881. Advertising for the desk claimed, “No desk in the market is made with more care, nor of better materials than the ‘Fashion,’ and none has met with a more popular reception, or gives better satisfaction.” The desk featured a Patent T-head, which eliminated screws and bolts by joining the wood of the top, back, and seat to the legs, which were made of cast iron. 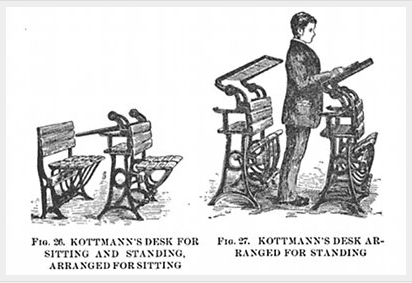 Although standing desks are currently hailed as an ergonomically friendly alternative to the traditional desk and chair, its use in the classroom can be traced back to 1899, when Dr. Ludwig Wilhelm Johannes Kotelmann wrote about standing desks in his book School Hygiene. 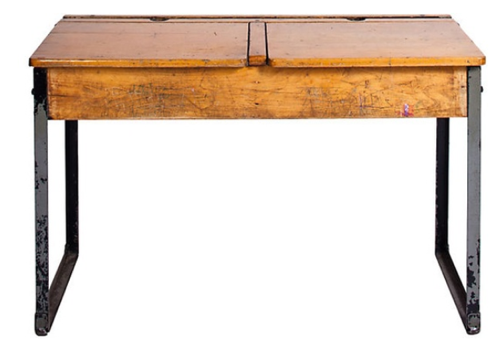 The wooden “Welsh School Desk” was manufactured in 1920 and featured a double compartment top on an iron base. 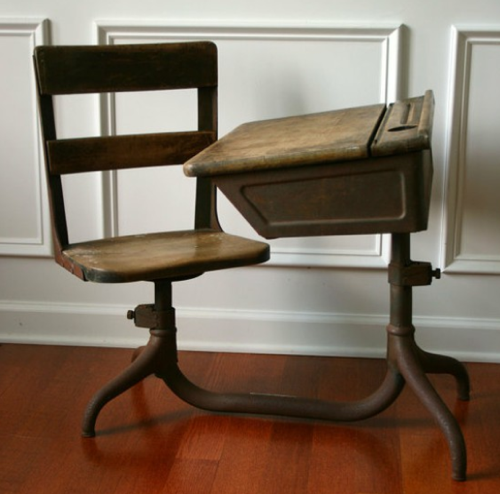 The school desk pictured above is representative of a new generation of school desks that featured individual cubbyholes, which allowed students to stash their belongings. The desk also included an adjustable seat and tabletop. 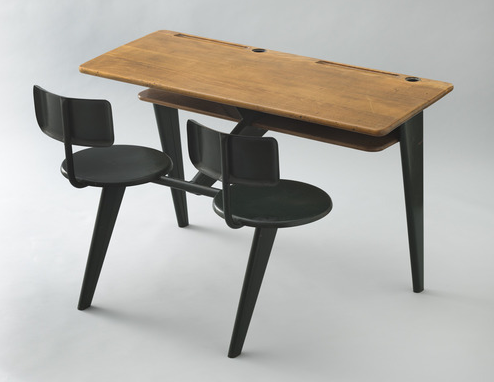 French architect Jean Prouvé created this tandem school desk in 1946. Prouvé was considered one of the most influential furniture designers of the early modern design movement. 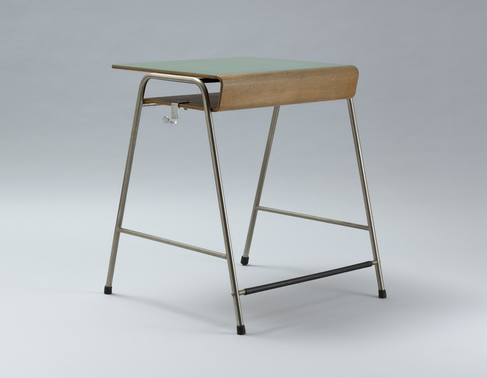 Arne Jacobsen developed the Munkegård school desk in 1950. The lightweight desk, made of plywood and chromed steel, featured a hook for school bags and a cubbyhole for schoolbooks. 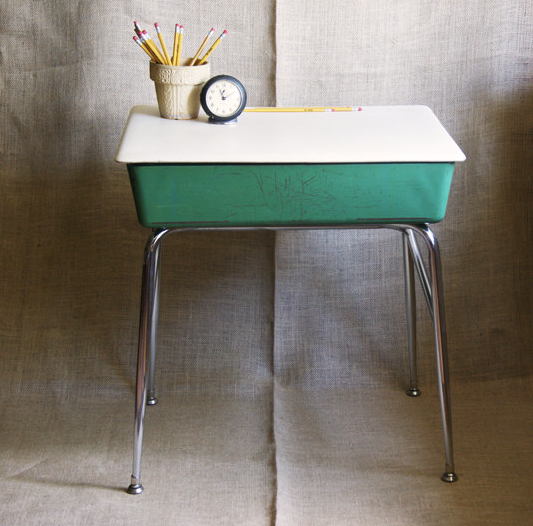 This school desk, manufactured by Heywood Wakefield, represents the steel-and-chrome school desks that became popular in the 1960s. The desk featured a plastic-composite lid that opened up, allowing students to stash belongings. 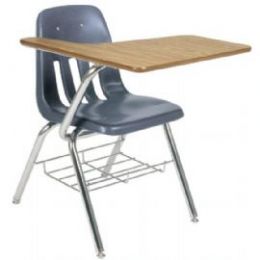 This 1970s wraparound desk, a style that is still in use, features a plastic chair with chrome legs and a fiberboard tabletop that partially encloses a student’s body. There is also a chrome rack on the bottom for schoolbooks and personal belongings. Left-handed adults may remember the frustration that came with attempting to snatch the few left-handed versions of this desk in their classrooms. 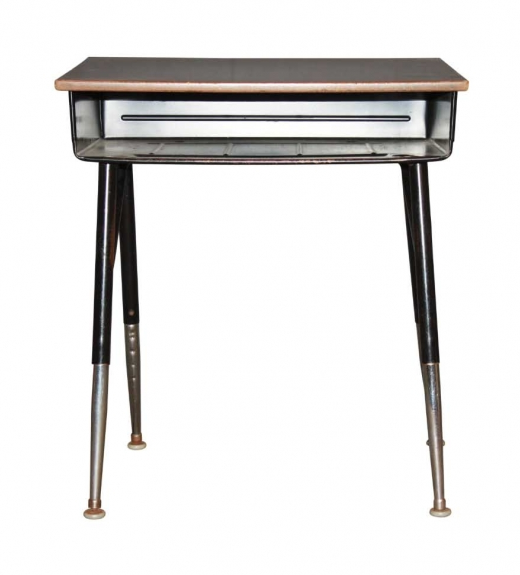 This 1980s school desk is similar in style to the Munkegård school desk of the 1950s and the Heywood Wakefield desk of the 1960s. Its base is made of steel, and it is topped with finished plywood. Similar models can still be found in classrooms today. This shows that what’s old really can become new again. 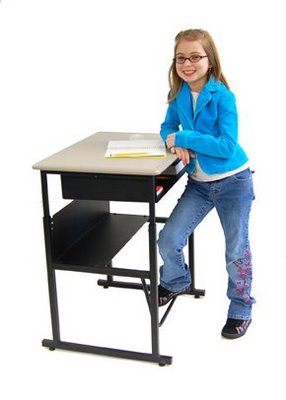 Sitting is claimed to lead to health issues, such as obesity and carpal tunnel syndrome. Needless to say, standing desks are becoming popular once again. In fact, a pilot study showed that students actually prefer using standing desks. 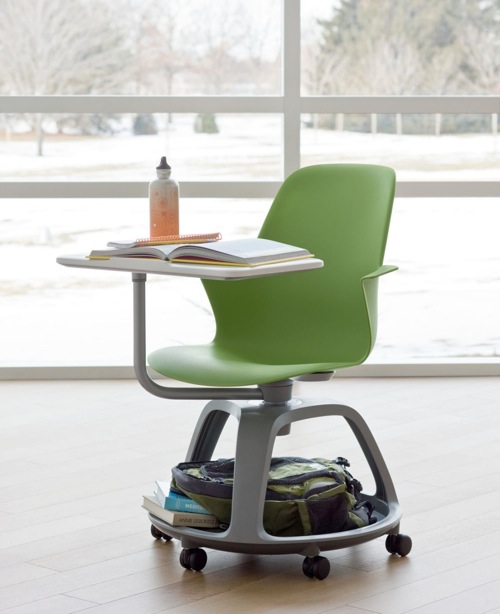 In 2010, global furniture manufacturer Steelcase Inc. introduced its Node chair at NeoCon. The chair features a swivel seat, a large work surface and a base designed to hold students’ belongings. This chair is not yet widely used in classrooms. 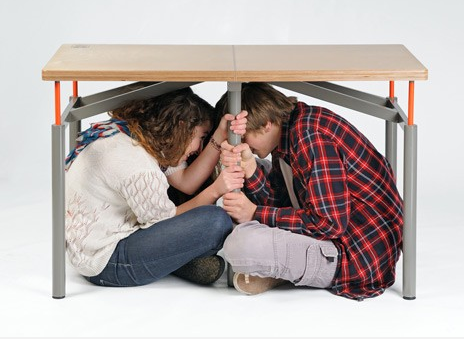 Students Arthur Brutter and Ido Bruno presented an earthquake-proof desk in Milan, Italy, earlier this year. The desk was created as their final project at the Bezalel Academy of Arts and Design in Jerusalem. The desk cannot be found in classrooms yet. The designers are currently awaiting a patent and official approval from Padua University in Italy so that they can distribute their desks to schools in disaster-prone areas around the world.