It's often said that people use only 10 percent of their brain capacity. It's also said that every person has either a “left-brain” or a “right-brain” personality. Dr. John Medina, a developmental molecular biologist, research consultant and author of Brain Rules: 12 Principles for Surviving and Thriving at Work, Home and School, begs to differ.

In his opening remarks before a packed auditorium of educators and IT decision makers attending the International Society for Technology in Education's 32nd annual conference and exposition in Philadelphia, Medina scoffed at those oft-repeated theories. As an affiliate professor of bioengineering at the University of Washington School of Medicine in Seattle and director of the Brain Center for Applied Learning Research at Seattle Pacific University, Medina said he's often asked how brain science can be leveraged to influence how we teach people.

“I'm fairly skeptical about applying anything in the neurosciences to formal education,” Medina told conference attendees. “We just don't know very much, in real terms, about how the brain actually works.” What's more, “every brain is wired differently and learns in ways that are unique to that wiring.”

Still, Medina had plenty to say about the state of education today and the ways in which technology might shape learning going forward.

Rules to Live By

In Brain Rules, a 2008 New York Times bestseller, Medina draws on his years of research into the genes involved in human brain development and the genetics of psychiatric disorders to identify and explain 12 rules that he says dictate how the human mind reacts to and organizes information. The rules can be summarized as follows:

“We know the human brain's evolutionary performance envelope: The human brain appears to have been designed to solve problems related to surviving in an outdoor setting … and to do so in near-constant motion,” Medina explained. “So even though we don't know squat about how the brain actually works, if you wanted to design a learning environment that is naturally opposed to what the brain is meant to do, you'd design a classroom. For business, you'd design a cubicle.”

If you want to change things, “you have to be willing, intellectually, to start over,” he said.

Digging deeper, Medina likened the human brain to a series of roadways. “All human brains are wired identically at the interstate level,” he said, “but all human learning occurs in the alleyways and the boulevards.” He added that learners need to create a database where they can store memorized information, but they also must be given the opportunity to improvise how they use that information.

“Any education environment that only emphasizes one or the other is failing the human brain,” Medina continued. “If all you do is create a database and memorize something, you are in danger of creating robots. If all you do is improvise, you are in danger of creating kids who only play air guitar. You need to have both a database and the ability to improvise off of it.”

Medina also touched on theory of mind (ToM), a concept that David Premack and Guy Woodruff described in a 1978 journal article as enabling “one to understand that mental states can be the cause of – and thus be used to explain and predict – others' behavior.”

Medina described ToM as the “ability to appear inside someone else's head and understand the reward and punishment systems [that drive them using] purely nonverbal cues,” adding that it gives teachers “the talent to be excellent teachers.”

In a nod to his audience, Medina concluded his remarks by acknowledging that today's teachers frequently work with technology and he wondered if technology would ever be equipped with ToM. To be as effective as teachers, he added, ToM-enabled hardware, software and other learning tools would have to accomplish three things:

Whether this would be a good or bad thing is a question Medina left open for the audience to decide.

For more of on Medina and his brain research, check out his Brain Rules blog.

In a seven-minute video presentation that formally kicked off the conference, ISTE President-Elect Holly Jobe welcomed attendees and talked about the many ways ISTE is working to “help students unlock their potential” (a nod to the 2011 conference's “Unlocking Potential” theme) and to help its members do their jobs better. Jobe then appeared on stage to salute outgoing board members and her predecessor and mentor, Dr. Helen Padgett.

Jobe also announced that ISTE will release at the conference a set of National Educational Technology Standards for Technology Coaches (NETS•C) covering topics such as teaching, learning and assessments; digital-age learning environments; professional development and program evaluation; and digital citizenship.

A companion white paper, Technology, Coaching and Community: Power Partners for Improved Professional Development in Primary and Secondary Education, also is now available. In addition to describing NETS•C in more detail, the publication introduces three different coaching models; offers 10 tips for leveraging technology coaching and community; and identifies five benefits that can result from this integration. 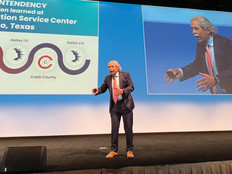