Oregon State University's College of Engineering has had a notebook requirement for almost a decade. For most of that time, students had to download and run an installer file and deal with licensing requirements for each piece of needed software — or trek to the computer lab to obtain access.

As more and different devices began to arrive on campus, the IT department sought a way to simplify the process. "We were looking for a way to level the playing ground, and really make it so it didn't matter what kind of notebook or device you brought," says Todd Shechter, IT director for the college.

Shechter and his team at Oregon State turned to Citrix XenApp and XenDesktop to give students and faculty browser-based, device-agnostic access to needed learning resources, but doing so has added benefits.

"We're really looking at it not only as application access, but also as an extension of the computer lab," Shechter says. "We have a limited number of computer lab seats, and especially toward the end of the academic quarter, those can fill up. We want students to enjoy the same level of access as they would in the lab from their notebook or portable device." 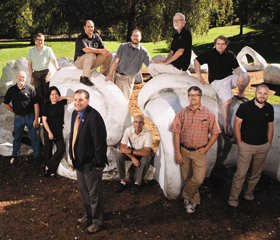 "They click on that, and they're good to go," he says.

" 'That app/program/system won't run on my phone/tablet/laptop' is becoming a less tolerated scenario in the always-connected age," says Eden Dahlstrom, director of research at EDUCAUSE.

As colleges and universities ride the wave of technology that is rapidly shifting from BYOD (bring your own device) to BYOx (where x is any technology solution), Dahlstrom urges institutions to focus on student access over assets.

"IT infrastructure that is capable of supporting an emergent BYOx-heavy environment should provide frictionless access between any user's device and any institutionally provided or managed services, systems, data or applications," Dahlstrom says.

Such levels of service are nearly the norm and are a basic expectation of higher ed customers who are accustomed to secure, mobile-oriented design in most other areas of their lives, including banking or shopping, she says.

The University of Tennessee at Knoxville stood up its first Citrix infrastructure in 2004, primarily to serve researchers and graduate students using limited-license applications that were not available in the computer labs. In February 2012, the IT team launched Apps@UT, an infrastructure built on Citrix XenApp and XenDesktop that allowed them to expand that access to include widely used applications such as SAS and SPSS. Today, UT's students are able to access these applications from their own devices, including mobile devices, regardless of the operating system.

UT also loans tablets to support classrooms, IT Support Specialist Lois Idol says, but "a lot of faculty are realizing that, in addition to tablets, they can also use student phones for classroom interactions."

Percentage of
undergraduates who own a smartphone, up from 76 percent in 2013

IT Support Specialist Christina Goode says that "where possible, the Office of Information Technology seeks to adopt applications that accommodate teaching and learning with whatever devices faculty and students may have."

She offers student response systems, or "clickers," as an example. With ­Apps@UT, students are not limited to the purpose-built, handheld device, but instead can use an app and mobile license that allow them to engage or respond to class polling with any Internet-enabled device.

Still, software licensing is an ever-present challenge, especially with such widespread access, as EDUCAUSE's Dahlstrom points out.

Shechter agrees: "There are a lot of vendor negotiations that have to happen; there are different layers of support and approval that you have to have." He credits universitywide support of his program with easing this particular burden.

"We have been a pilot for something larger that we're rolling out to the entire campus," Shechter says. "We've had really strong support, from the CIO of the university all the way down to dean level."

After working and negotiating with multiple vendors, Oregon State is able to provide all but a handful of more than 160 applications to students through XenApp and XenDesktop.

Other hurdles Dahlstrom highlights include legacy operating systems and the difficulty of virtualizing some specific pieces of software; however, her advice to colleges and universities faced with these challenges is not technical. Instead, she says to look to IT leadership.

"Every college and university has a unique technological ecosystem, so there really is no single technology solution or piece of technical advice to offer institutions facing challenges like ubiquitously integrating virtual app tools," Dahlstrom says. "This is where experienced and thoughtful leadership is necessary to help the institution optimize the impact of IT. ... A good leader will offer solutions that are calibrated with institutional priorities that are in line with peer or aspirational benchmarks, and move an institution toward an improved technology ecosystem."

As officials at North Greenville University in Tigerville, S.C., anticipated the growth of their online programs, the IT services department began looking for a secure way to ensure students and faculty would have access to all of the resources they need.

Initially, they were in favor of a secure VPN service, says Paul Garrett, director of IT services. However, given the BYOD environment on campus, they ultimately decided that desktop and app virtualization were preferable from a security standpoint, especially because most of the devices accessing the university's resources are not university-controlled.

Percentage of undergraduates who own a tablet, up from 31  percent in 2013

While the university does maintain a small VPN for university-owned mobile resources, application access is available to everyone through Ericom PowerTerm WebConnect.

"When you connect via VPN, you open yourself a little bit to what might be out there on that client," Garrett says. With no simple way to verify that all the various student- and faculty-owned devices on campus have, for example, sufficient virus protection, he says, "a remote connection through Ericom is a more secure way to do it."

As with the Citrix solutions, Ericom allows students, faculty and staff to log in through a web browser to access the applications and software they need. Garrett says the system is so straightforward that students generally need only a short training session, usually handled by their professors early in the semester, to get started.

Beyond device-agnostic resource access, colleges and universities are seeing additional advantages. At the University of Tennessee, one unforeseen benefit of the IT team's Citrix deployment was the removal of the user burden to meet sometimes-conflicting software requirements.

Users are able to access resources without worrying about what version of browser or Java level are needed for individual applications. Rather than dealing with endless updates or incompatible programs, students and faculty members can simply log in, then get down to business.

Likewise, Oregon State University students have found international travel — and poor Wi-Fi access — need not inhibit their education when they have virtual access to their learning tools, Shechter says. And at North Greenville University, Ericom PowerTerm WebConnect has proved to have unanticipated value in the administrative realm, allowing remote staff access to the student information system, Garrett says.

Dahlstrom expects the introduction of similar tools will continue, all designed to better help colleges and universities secure access to multifaceted learning resources. She offers advice for institutions at any stage in the process.

"Institutions that focus on securing data — access — versus securing devices —assets — will be strategically positioned to deploy technologies that decouple applications and operating systems," Dahlstrom says. "Data that are encrypted at rest and in transit don't need to be locked down and will be ready for new, better or different virtual application delivery tools."
Given the benefits of this decoupling — greater mobility, improved security, simplified maintenance and streamlined operations — institutions can save money and time in the future by laying the groundwork for deployment today.

"The evolution of this type of technology is inevitable," she says. "We are in an era where it is difficult to predict the next new technology innovation and how each innovation will replace, integrate with, or supplement current technology. When innovation does surface, however, a true technology leader will be able to see how this fits into their institution's technology ecosystem and recommend the best course of action given the context of the circumstances."