Researchers at the University of Maryland, College Park are combining VR platforms with high-resolution cameras to develop new applications that can fuse information from both virtual and real-life settings.

In a dark room at the University of Maryland (UMD) College Park, Amitabh Varshney is surrounded by a massive curved projector screen, giving an audience a glimpse of the futuristic technologies being developed by engineers.

Varshney is the director of the University of Maryland Institute for Advanced Computer Studies. This week, he led a presentation of some of the institute’s latest developments at the Augmentarium, one of the institute's centerpieces — a test facility for the development of virtual- and augmented-reality projects at the university.

On screen, a video filmed in 3D shows a surgeon repairing a man's bladder. The perspective shifts between doctors, and Varshney explains how such technology, including virtual reality, will give surgical residents an invaluable learning opportunity.

"This is truly the beginning of a new era in visual communication and learning," said Varshney. "Things are about to get very exciting in education very soon." 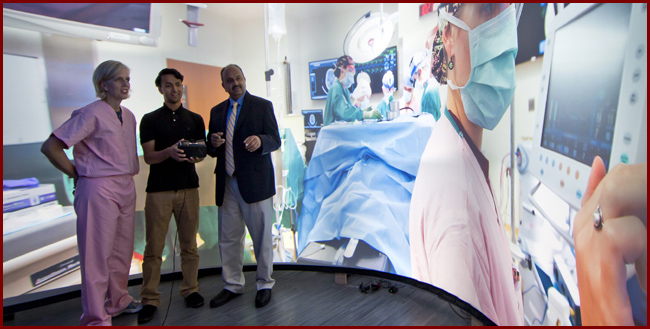 VR Makes a Splash in the Mainstream

This was an auspicious week for VR technology. On Monday, the first units of the Oculus Rift VR headset were released. Oculus is a Facebook-backed venture that is the first to market what Varshney calls the third-generation of VR technology. Varshney is thrilled, because with the release of these newer, more powerful VR headsets, the technology he's been working with since the early 1990s is becoming mainstream and more affordable — which brings us back to education.

"Imagine a physics class where you're able to show how friction works. Imagine being able to experience gravity on Mars — by moving around virtually," he says. "VR can make science, technology and art come alive."

VR will soon become an open canvas for educators to create learning experiences. Eventually, fitting VR into the curriculum will be limited only by an instructor’s imagination and budget, says Christopher Sessums, the program director of research and evaluation at Johns Hopkins School of Education.

"The classroom could be on the deck of a boat. This might be a wonderful way to experience life at sea, perhaps as sailors felt in Moby Dick or The Old Man and the Sea. Such empathetic experiences could deepen students’ knowledge and understanding of a variety of historic and contemporary events," says Sessums. “Perhaps experiencing life as slave on a slave ship or an infantryman on the battlefield might enlighten future generations and prevent them from repeating similar outcomes."

VR's Future is Uncharted — So Is Education's

Experiences like these are around the corner — between five and 10 years from being "commonplace" in certain classrooms, says Varshney. But content creation for this nascent medium will need to catch up. To that end, UMD is creating a major in immersive multimedia design that brings together a variety of colleges across the university, fusing disciplines such as engineering and art into a versatile content-creation team.

Instead of making an artist learn to be a programmer, or a programmer learn to be a storyteller, the idea is to utilize the strengths of each area of creation. This cross-discipline team will spend much of its time studying and working together on a group content creation project to be completed in the team members’ fourth year.

"If you could be immersed with a group of your peers, all interacting together virtually in environments like these, how would that change the way we learn and understand education?" asked Varshney. “We are soon going to have a whole new generation growing up in the presence of these immersive technologies."

For Sessums, the immediate future for the technology in education is harder to predict, noting that analysts didn’t foresee the impact smartphones would have on the world. The only certainty is that VR will bring the possibility of powerful new worlds, and it’s up to educators to take advantage of it.

“VR will not fix education,” Sessums says. “Yet perhaps 100 years from now, VR applications will extend learning opportunities far beyond our comprehension.”