USC’s Susan Metros says the arts and creativity are essentials in entrepreneurial education.

When the University of Southern California opened its new Iovine and Young Academy in August, students zeroed in on a problem — no skateboard stand. So they got together to create a cardboard prototype, then went into the academy’s woodshop to build one.

“These are not kids who are going to sit back and say, ‘I don’t know how to do that,’ ” says Susan Metros, associate dean of the USC Jimmy Iovine and Andre Young Academy for Arts, Technology and the Business of Innovation (a program of the USC Roski School of Art and Design) and interim CIO of USC’s Marshall School of Business. “They’re always thinking about how to make things happen, and nothing seems to stop them.”

That was just the idea Beats Electronics founders Jimmy Iovine and Andre Young — aka Dr. Dre — had in mind when they established the academy: Create a program that fuses engineering, business and arts education to produce innovative, entrepreneurial graduates. And because an essential part of the program requires students to build products and spend much of their senior year creating prototypes, USC housed the academy in a makerspace dubbed the Garage.

“It’s a very sheltered space where you can unleash your creativity,” says freshman Caitlin Tran.

While USC is one of only a few universities to center an entire academy inside a makerspace where students take the majority of their courses, a growing number of institutions are inviting students, faculty and even members of their surrounding communities into makerspaces. The idea is that by providing comfortable settings with high-tech carpentry and crafting tools, visitors will hang out, collaborate, learn and become inspired to build innovative creations.

“Makerspaces are not yet incredibly common in academic libraries, but there’s a wave of early adopters,” says Steven Bell, associate university librarian at Temple University and a past president of the Association of College and Research Libraries.

He says there’s no general agreement as to what constitutes a makerspace in an academic setting, however. While a 3D printer is a typical component, it could also include helping community members use a Raspberry Pi to build a small computer, providing soldering irons so students can create circuits for a motherboard or even nontechnical crafts projects.

“I don’t think there are constraints on what it is or how it should work or what’s in there,” Bell says. “It’s a great period of experimentation, and academic librarians are learning from each other.”

The 31 students at the Iovine and Young Academy aren’t typical college freshmen. Their average grade point average is 3.75. Several created businesses, built applications and even sold startups before their first practice SAT exam.

But when they started looking at colleges, many were disappointed. Tran, for instance, is interested in art, technology and business, and while she can envision a career incorporating all three disciplines, she couldn’t find a program that covered them all.

“Most said when they found this degree, they felt like this was it — the answer to their prayers,” says Metros.

The program’s home, the Garage, was created from an undeveloped space on the fourth floor of USC’s student ­center. It’s a large rotunda with two nontraditional classrooms, and it has a variety of rooms off the central area, ­including a fabrication room, a 3D ­printing space, a workshop and a ­conference room. High-end audio-visual equipment and displays fill the space. Five group workstations are equipped with 10 Gigabit Ethernet bandwidth and cutting-edge industry-standard design software.

Unlike in traditional classroom and campus spaces, students in the program are in the Garage day and night. They take classes, eat lunch and hang out there.

The curriculum reflects the entrepreneurial spirit of the program, but there’s also flexibility built into the schedule. As faculty get to know the students, they learn about their interests and areas in which they strive to build additional knowledge. So they hold what they call “popups” — impromptu lessons and demos that focus on particular concepts and skills, Metros says.

Regardless of the requirements, Tran says the academy’s entire culture encourages students to create. When she doesn’t know how to do something, she can just ask one of her classmates, whose skills range from graphic design to building drones in the backyard.

“We always have an expert in our midst,” says Tran.

The makerspace at Massachusett’s Wheaton College grew out of the ­institution’s computer science department, where Associate Professor Tom Armstrong had witnessed a growing void in student knowledge.

The problem, he says, is that instead of going to computer labs to access high-tech equipment, students worked in their dorm rooms, where they had access to increasingly powerful computers of their own. That meant they were no longer collaborating on assignments, seeing what others were working on or asking each other questions. But that’s how students have traditionally gained knowledge outside of class.

“Students would be these solitary scholars in their rooms, and that’s not the environment we wanted,” Armstrong says.

About five years ago, with some seed funding, he began purchasing DJ equipment, hand tools, a 3D printer, Arduinos and Raspberry Pi computers — “low-cost things that we thought would bring more folks in,” Armstrong says. And that’s how the Wheaton Autonomous Learning Lab, affectionately known as the Whale Lab, was born. With additional funding, the college has since purchased other game-changing equipment, including a laser cutter, an industrial design fabricating 3D printer, a computer-controlled milling machine and a jacquard loom.

Having an array of activities in the space is important, Armstrong says, because it helps to expand student knowledge. One person may work at programming while another crochets, and each may think the other’s tasks seem impossible. But the more time they spend together, the more those tasks feel approachable.

“The phrase ‘I don’t know’ becomes less scary,” he says.

When Fort Hays State University in Kansas opened its makerspace in summer 2013 inside the Forsyth Library, the goal was to provide a space where students could create, innovate and work with tools they wouldn’t otherwise have access to. Officials there have since met that goal and more.

The university’s education department, for instance, has used the makerspace to teach elementary science education to preservice teachers, who in turn run after-school programs there for students from local schools, explains Paul Adams, interim dean of FHSU’s College of Education and Technology and director of the Science and Mathematics Education Institute.

“It’s great, because we’re getting STEM education for preservice students, and they’re beginning to get that out to the children in the community,” says Adams.

As makerspaces become more common on college campuses, those blazing the trail offer advice for colleges and universities just getting started. 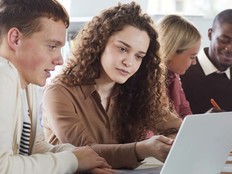