If you haven’t heard of Coursera, it’s worth taking a few minutes to learn about their mission. They are offering free education to the masses, taught by professors from some of the best schools in the world. Since they launched in April 2012, their model has received significant recognition from technology and education communities. Here is an excerpt from their “About” page:

We are a social entrepreneurship company that partners with the top universities in the world to offer courses online for anyone to take, for free. We envision a future where the top universities are educating not only thousands of students, but millions. Our technology enables the best professors to teach tens or hundreds of thousands of students.

Their online platform is hugely popular among students, and top-tier universities are jumping on board as fast as the Coursera team can sign them up. If you aren’t familiar with their work, here are three things you should know:

Coursera Has Partnered with 33 Major Universities

Major, as in Brown, Duke, Johns Hopkins, Stanford and Princeton. The presidents of these colleges believe that the Coursera mission should be taken seriously. Even without an immediate return on their investment, this is a group of schools that presidents want to be associated with, according to The New York Times:

The caliber of Coursera’s partners — Princeton, Stanford and the University of Pennsylvania were among the original partners — has given it credibility and cachet in higher education circles, so much so that some university presidents have begun to fret that it will reflect badly on them if they fail to sign on.

“You’re known by your partners, and this is the College of Cardinals,” said E. Gordon Gee, the president of Ohio State, one of the new partners. “It’s some of the best universities in the country.”

They Have 1.5 Million Students

To put things in perspective, it took Coursera about four months to get its first million users. Here’s a look at how long it took some other popular web companies to reach 1 million users: 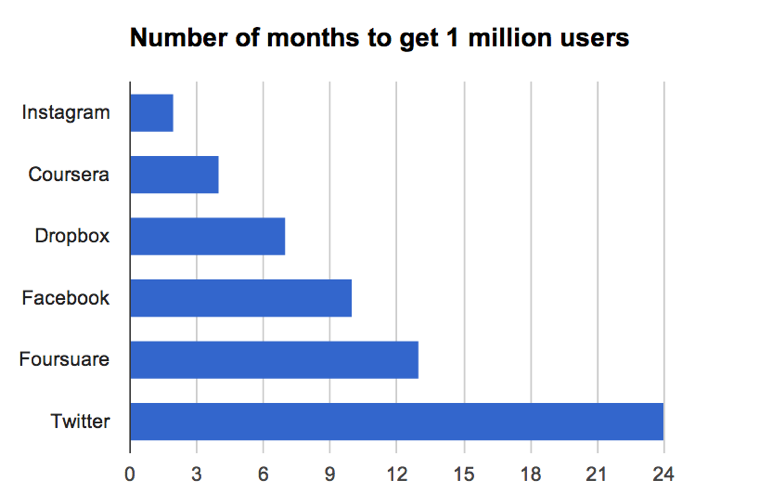 Schools sign a contract stating that they will receive a cut of the profits . . . if there are any. There is no model for monetizing Coursera right now, but they aren’t lacking funding. They received $16 million in venture capital funding that should keep them going until they receive another round or launch a new business model.

You can join Coursera for free here, and start taking classes right away. If you have used Coursera, let us know what you think in the Comments section.