Chromebooks are becoming the go-to computing device for K–12 schools, as officials are increasingly drawn to the ­platform’s low price, ease of use, ease of maintenance and high functionality. Getting maximum return on their investment, however, often turns out to be a harder equation.

“Everybody always has a top-level plan that says, ‘Computers are good, so let’s go get the computers,’” says Elliot Soloway, co-founder of the Center for Highly Interactive Computing in Education and a professor of computer science at the University of Michigan. “But they’ve really got to go a lot deeper to say, ‘What do we really want to do with these devices, and what specific curriculum are we going to give teachers to make sure that they get the results we want?’ ”

In fact, a number of schools have learned the hard way that it’s tempting, easy and potentially disastrous to put Chromebooks in the hands of students before their administration, teachers and tech teams are ready. Here are five do’s and don’ts schools should follow when choosing to utilize Chromebooks in the classroom.

1. Do Have a Robust Infrastructure

Chromebooks may be relatively simple devices, but the underlying connectivity needed to power them is not, especially because every use requires internet access. That’s why officials at Aldine Independent School District in Houston made it a point to boost their existing network and internet capacity across all of its 76 campuses before initiating a plan to roll out 40,000 Acer Chromebook devices. The project, which is being phased in over three years, will provide one Chromebook for every two students as a way to encourage those students to work together.

Unfortunately, district schools were vastly under­equipped for the project. Most campuses had a total of just three wireless access points to handle all of the computing demand, says Nguyen Bui, the district’s executive director of technology innovation and initiatives. “We knew that if we were going to go forward with this project, we would need to look at future growth, not just satisfy our current numbers. We talked to other campuses, and did surveys and determined that we would need a wireless access point in every single classroom if we wanted all of the applications and digital resources to be accessible whenever anyone needed them.”

The district chose to install 7,500 802.11ac access points from Extreme Networks and also significantly upgraded its bandwidth capacity, increasing the internet connections between schools from 1 to 10 gigabits and the connection from the district out to its external wide area network from 10 to 100 gigabits.

Turning a paper worksheet into a PDF, giving quizzes in digital format or sending students out to play learning games and view videos does not even begin to take advantage of the Chromebook’s potential for transforming teaching and learning, says Regents Professor Cathleen Norris, chair of the Department of Learning Technologies at the University of North Texas. Too often, schools don’t provide a curriculum that is specifically designed to work with technology; worse, many expect teachers to create one by themselves, Norris says.

“There is a difference between content and curriculum, and there is a ton of content out there that you can take advantage of using Chromebooks, but you need someone to sort through it, vet it and put it all together so it has scope and sequence and aligns with certain standards,” she says. “If schools are expecting teachers to do that, then don’t expect them to effectively ­integrate technology into their teaching because they don’t have the time, and they’re not trained to do that.”

Instead, Norris says, administrators need to have a vision for what they want to achieve in the classroom with the Chromebooks and then bring in curriculum developers to help achieve that goal.

3. Don’t Deliver Chromebooks Before Teachers Are Up to Speed

Early in their project, Aldine ISD officials made the mistake of putting some Chromebooks in a classroom before teachers had undergone any professional development. “We didn’t see a lot of success,” says Akilah Willery, the district’s executive director of instructional technology integration. “Teachers treated the devices as if they were little more than an electronic worksheet or workbook.” 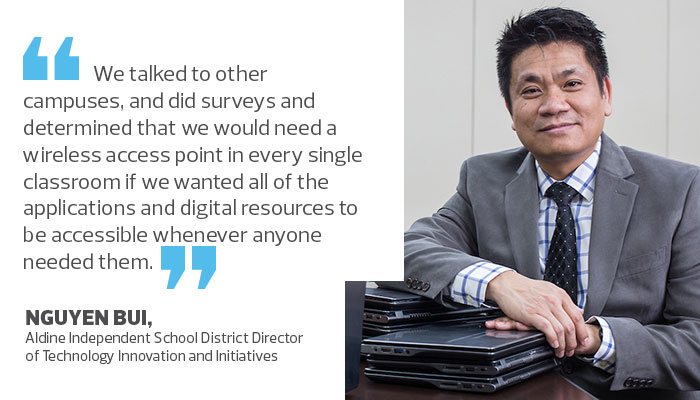 So the district developed Level Up, ­a series of online training courses that cover “core competencies that we thought were universal, no matter what grade level and what content area the teacher was involved in,” Willery says. Teachers take the course using a Chromebook and work within Schoology, the district’s learning management system. “So it’s actually a way to kick the tires first before they incorporate it into the ­classroom with their kids.” Teachers are required to be Certified Level 1 before student Chromebooks are delivered to their classrooms.

Likewise, Blount County Schools in suburban Knoxville, Tenn., put together a self-directed, online training series called Google Basic Training. To incentivize teachers, the school allows teachers who complete all six modules of the course to get out of a scheduled onsite professional development day, says Mike Crabtree, assistant director of curriculum and instruction for the district, who notes that HP Chromebooks are being rolled out districtwide as part of a multi-year project.

“We intended for about 100 teachers to go through the training, but already over 800 — or 95 percent of our staff — have voluntarily completed the modules. That’s been huge,” Crabtree says.

4. Do Give Teachers Ongoing IT Support

After their initial training, teachers will still need assistance if they’re going to maximize technology in their classrooms, and schools are providing it in a number of ways. Aldine, for example, has at least one instructional technology specialist on each campus to help not only with technical issues, but also with coaching teachers on how to better integrate digital resources and technology tools into their day-to-day teaching.

Blount County Schools has developed a cadre of tech-teacher leaders, a small group of highly enthusiastic early adopters who work directly with their fellow teachers to help them enhance their ability to use technology as an instructional tool. “They really bridge that gap between technology and teaching, and so they do a lot of in-service professional development training, not just for the whole school but with grade-level teams and individually,” says Crabtree. “They’ve also set up their own classrooms as model classrooms and they invite teachers to come see it and observe them at work.”

Schalmont Central School District in Schenectady, N.Y., meanwhile, tapped one of its existing teachers, John George, to serve as the technology integration teacher. He now helps other teachers and students better understand how to maximize technology tools in the classroom.

“Teachers are all different, and so they learn differently as well,” George says, noting that he works with all grade levels at all schools on a regular and as-needed basis. “Some want one-on-one help, some want me to observe them teaching and make suggestions and others want to watch me teach a specific topic.”

5. Do Use Customized Management Tools

There are plenty of free ­management tools, but Terri McCreadie, director of IT and network administrator at Schalmont, decided to also invest part of her budget in GoGuardian Director, a premium analytics tool that provides insight into exactly how Google educational software and other resources are being utilized in the classroom. She initially planned to use the tool for one year, but it has proved so valuable, she says, that the school is going to stick with it for the foreseeable future.

With Director, she can report to George that during a past week, 80 percent of all students who had their own school-issued Dell Chromebooks were using them; they utilized Google Drive most often; and they were working on papers, assignments and research.

“He reports directly to the curriculum director, so they can sit down and see where they’re having those gains and successes,” McCreadie says. “But it’s also telling them where those pockets of teachers are that haven’t bought in yet. They can then refocus their efforts to continue helping teachers who are struggling and then maybe tweak the curriculum if necessary.”