How does your school district’s bandwidth spending compare with its neighbors? A new online tool offers a transparent view of public-school Internet usage and how much district leaders are spending.

The information featured on Compare & Connect K–12 is based on the most recent E-Rate application data recently made public by the Federal Communications Commission (FCC), as part of its E-Rate modernization efforts, says Nell Hurley, EducationSuperHighway's director of marketing and communications.

"But just because it's public doesn’t mean it's easy to access or for states to understand," Hurley says of the E-Rate application data. "We took that public data and built this tool around it, spending many months verifying it."

The goal of the tool is to empower school districts with price and usage transparency, so they can make informed decisions on how to service their bandwidth needs. For each verified school district, Compare & Connect K–12 shows a graphical representation of how far along districts are with their goals, what comparable districts are paying, and who they’re buying their service from.

"We think transparency is a huge opportunity for districts to leverage data and help get the broadband they need," Hurley says. "We do foresee there being greater value. They'll start getting more bandwidth for what they're paying."

A quick search allows users to compare the nation’s largest school district, New York City Public Schools, with surrounding urban districts, such as the Elmira City School District, to see how they stack up. The tool reveals that NYCPS’s current bandwidth of 22 Kbps per student doesn’t meet the FCC’s guidelines. At a minimum, district bandwidth should provide 100 Kbps per student, scaling up to 1 Mbps by 2020. Meanwhile, the dramatically smaller Elmira City School District is providing 666 Kbps per student.

Of course, NYCPS isn’t alone — 23 percent of public schools in the country do not yet provide the FCC’s minimum threshold for bandwidth per student, according to EducationSuperHighway’s State of the States report, issued in 2015. The report shows how states match up in the nationwide school district bandwidth race, as school districts are building up their online capabilities to meet the FCC’s newly defined connectivity goals.

Visit Compare & Connect K–12 to see how your district is doing. 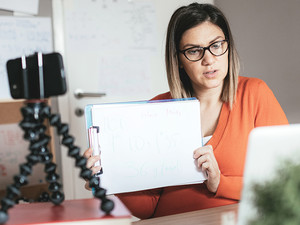