For high school students in Minnesota’s Pine Island School District, this year’s deployment of a one-to-one tablet program has completely transformed the learning experience — essentially taking it from black and white to 3D Technicolor.

Just ask instructor Angela Organ, who teaches English, speech and an online film course. “The difference between having a tablet and not having one is much like the difference between a standard definition film and 3D,” she explains. “Tablets bring curriculum to life. The multidimensional approach a tablet provides appeals to a wide variety of learning styles. In addition, tablets are a wonderful collaboration tool, as well as a necessity for successful online learning.”

Indeed, ever since the Lenovo Windows 8 Pro tablets debuted in a starring role on the pre-K–12 campus, students at every level are reaping the benefits. The district not only supplied all 360 freshmen through seniors with their own personal Lenovo devices, but it also revamped its previous technology reserve to trickle down to the younger grades.

“We were trying to be innovative with students and engage in technology for the 21st century,” explains Technology Director Taylor Bauman, who oversaw the district’s three-phase initiative.

While the use of technology in the classroom has become prevalent in recent years, experts warn that it’s not enough to simply provide students with access to the devices.

“Technology is not going to change anything — it’s how technology is used that makes all of the difference,” emphasizes Mukul Krishna, digital media senior global director at Frost.

By all accounts, Pine Island’s one-to-one initiative appears to be right on target.

“In my room, it has definitely increased the amount of collaborative work between both student and teacher, and student and student,” reveals Patrick Smith, an English teacher and the district’s technology integrationist. “It has really leveled the playing field for all of our students.”

Tony Brown, a 9th grade U.S. History teacher, agrees. “The tablets have allowed us to do a lot of things we couldn't before,” he reveals, beginning with his ability to use a "flipped classroom" in which students can take notes at home and reserve class time for more engaging activities and deeper understanding.

The Lenovo devices have also enabled online testing, which makes it much easier for instructors to home in on content retention. “It allows me to have instant feedback on how students are doing,” Brown explains. “I know what I need to re-teach the next day before students even leave the classroom.”

Furthermore, by utilizing online timelines through websites such as timetoast.com and timeglider.com, students have learned to better organize information in ways that they enjoy, Brown adds.

Another positive impact, according to instructors, is the fact that students now have immediate access to a variety of beneficial resources. “I no longer need to be the ‘expert’ in the classroom all the time,” Brown says. “Just today a student asked me how North Carolina got its border. I directed him to the History Channel's show on ‘How the States Got the Shapes,’ and he was able to find the answer on his own.”

A student’s ability to reap the many advantages of technology depends largely on how well an initiative is implemented, Frost’s Krishna points out, adding that proper staff and student training is essential.

“If the instructor isn’t able to use the device, or doesn’t have the right programs running on top of it, it won’t be as effective,” he stresses.

Bauman agrees. “It’s critical that you have buy-in from staff, students, stakeholders and the school board,” he emphasizes. “If you just push it out and say ‘use it,’ it won’t be successful. Training for staff and students in how to use the devices and all of the resources is very important.”

Smith, who was instrumental in rolling out the district’s one-to-one program, confirms that comprehensive student and staff development has been a crucial part of the success of Pine Island’s venture. Teachers not only received initial training on the Lenovo tablets over the summer, but also maintain access to continued support, including various staff development sessions tailored to the teacher’s level of expertise. Furthermore, each instructor is given a “technology day off,” where they are free to work on technology projects in their classrooms. 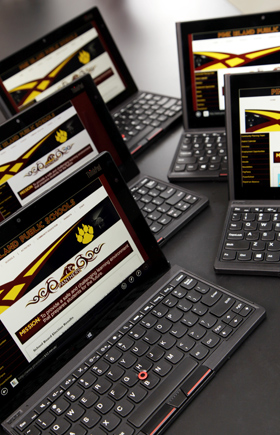 To properly prepare students, the district facilitated a mandatory Moodle introductory course, as well as provided Windows 8 and device training the first week of school. “We also do a ‘Tech Tip’ in our daily announcements, and I am available for one-on-one help during our homeroom time,” Smith says. Furthermore, the district will soon be launching brief weekly technology trainings.

The Tech Behind the Teaching

Another key to a successful technology rollout, Bauman says, is having the back-end infrastructure in place. “All of it has to be in order before you drop the tablets in,” he cautions.

In fact, long before the first Lenovo made its way into a Pine Island classroom, the district completed extensive network upgrades behind the scenes, which constituted the project’s first phase. In addition to purchasing a new cloud-based Meraki MX400 Security Appliance, Pine Island replaced its older, unsupported servers with two new devices, then virtualized the entire environment. Next, the district expanded its wireless access points to achieve near total coverage of the campus by deploying Meraki MR16 Access Points. Upgrades were also completed to wiring closets, network switch gear and the district’s fiber backbone.

Ease of use and superior functionality were among the reasons Pine Island chose the Meraki devices, Bauman says, as well as the fact that the products were cloud-based.

“I love the ability to manage it from anywhere,” he explains. “The hardware is also very well built. We haven’t had any failures at all.”

With its network up to snuff, the district was able to progress to phase two of the project, the selection of a tablet. The decision to go with Lenovo was born out of numerous discussions and input from a variety of sources. First, Pine Island assembled a technology committee composed of a broad range of individuals including parents, teachers, principals and school board members. The focus group then worked diligently to ensure the overall technology plan aligned with several key district goals.

The ability to reduce textbook, copy and printing costs, as well as consolidate computer lab space and equipment, and reallocate classroom space, ranked among the chief objectives.

The committee also hashed out a list of requirements in a tablet. Topping the priority list was a device that could facilitate online testing capabilities, offer long battery life and a USB port, and enable students to handwrite notes through a digitizer.

“The tech committee did a lot of research and testing of different manufacturers and models,” Bauman reveals.

Ultimately, the Lenovo Windows 8 Pro Tablet 2 emerged at the top of the class.

“We wanted something that students could complete state testing on,” Bauman says. “To meet that requirement, it had to be Windows 8 Professional-based, with certain features and functionality.”

Furthermore, with various departments such as Art, Foreign Language and English desiring the capability of writing with a pen, the fact that the Lenovo was one of the few devices that came with an actual digitizer proved very important.

The district is now tackling its final phase of the project. “We’re evaluating everything we did in phases one and two and looking for new and innovative ways to use all of the resources we’ve upgraded and put into place,” Bauman reports.

More Engagement at a Lower Cost

Although the technology director acknowledges that it’s still too early to ring up an exact return on investment (ROI) figure, there is no doubt the tablets are earning their keep.

“We know there’s a huge time savings, from a class management perspective,” he says, pointing out that prior to the launch of the one-to-one program, students lost valuable time traveling round trip to computer labs, which were not centrally located on the campus.

“We’re talking about 5 to 15 minutes of travel time,” Bauman says. “When you consider that these kids are doing that three times a week, it eats up a lot of classroom time.”

“We were able to eliminate labs and let the students have the technology to take with them throughout the day and take home,” Bauman explains.

Another positive outcome has been the school’s ability to save a tree — maybe even a forest. Not only have most teachers in the English and Social Studies departments already gone textbook-free this year, but Pine Island is now heading toward a paperless environment. “We have one student printer in the whole building,” Bauman says.

Even more, instructors and staff reveal that students have become much more academically immersed since receiving their personal computers.

“A lot of teachers see students who have never before read the news now sitting in class reading the news,” Bauman shares. “They definitely seem to be more engaged when they are in the classroom.”

And outside the classroom, as well. “I go through the lunchroom and see the kids constantly working on their tablets,” Bauman reports. “Their time management seems to be a lot better than it was before, as well.”

Even the 900 elementary and middle graders are benefitting from the notebook initiative, since Pine Island took some of the tablets that had been used the previous year for upper-grade pilot programs and re-commissioned them in kindergarten, first- and second-grade classrooms.

The remaining tablets were arranged on carts for use by fourth-, fifth- and sixth-grade students. “We really tried to reuse all of our existing technology and develop a plan that was cost-conscious and supported K–12,” Bauman says.

Furthermore, students in seventh and eighth grade were given four shared computer carts, each stocked with 30 new Lenovo x130e notebooks.

“Our school board really wanted to move us into the 21st century, and they have been really supportive of us,” Bauman emphasizes.

And that level of commitment is imperative, according to Krishna. “How much support a school district gives to a program, and how much buy-in it gets from instructors, is key to a technology program,” he emphasizes.

Also instrumental in helping Pine Island carry out its efforts was CDW•G. “Our partnership with CDW•G is outstanding,” Bauman raves. “They’ve been very supportive throughout the whole thing.”

From supplying demo tablets for evaluation to assisting with the best configuration options for the Meraki devices, CDW•G was there through every step of the process.

“They were able to deliver what we needed on time and they match anything — their pricing is very competitive in the marketplace,” Bauman says. “It was not only a great value, but an overall great experience.”