High school sports aren’t anywhere near the level of sophistication technologically that their counterparts at the college and pro levels have achieved, but that doesn’t mean technology isn’t having a transformative impact on how high school sports teams are managed.

Often, it’s merely a matter of time and resources for some of the technologies to work their way down to the high school level.

“It really comes down to resources for a high school,” said Charlie Ward, speaking at a CDW-Intel thought leadership event in Jacksonville, Fla. during the first week of March Madness. “High schools are working to catch up. Everything is a trickle-down effect.” 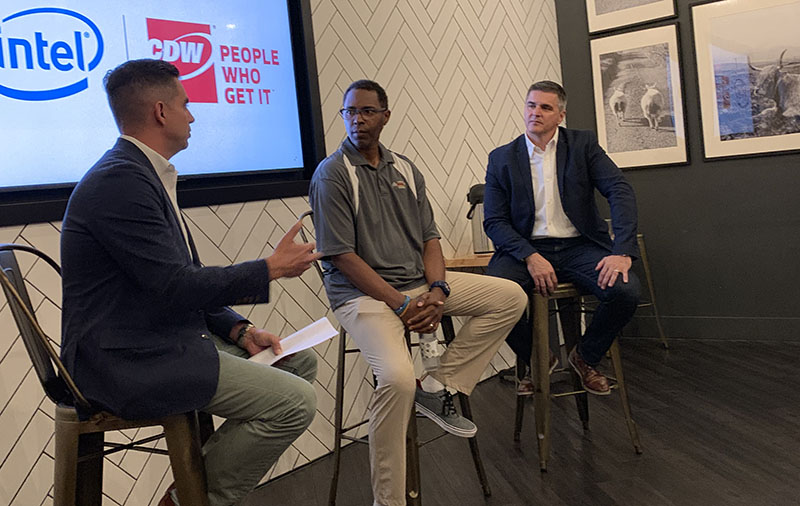 Charlie Ward (middle) spoke as part of a thought leadership panel on sports and technology sponsored by CDW and Intel in Jacksonsville, Fla. during the first round of the March Madness tournament. Photography by: Ricky Ribeiro

MORE FROM EDTECH: Check out how technology has reshaped K–12 athletics.

Balancing the Value and Distraction of Technology in Sports

Ward, a former NBA player and Heisman Trophy winner, is currently the boys basketball coach for Florida State University Schools’ Florida High. The school functions as a charter school within FSU, which offers valuable research and training experience for students in FSU’s College of Education.

As an FSU grad and former basketball and football player for the university, Ward finds himself settling back in where it all started. And while he’s still adjusting from his previous role as a high school football coach, according to a report from USA Today, he’s also grappling with the realities of managing a team of teenagers who are digital natives.

One major aspect of coaching that’s part of his life today — text messaging — didn’t even exist back when he was a high school and college athlete.

“We have a group text that we use to communicate with our kids and parents. There's a plethora of apps you can use for that, from scheduling to messages,” said Ward. “It's a great tool for us to have to stay in touch with our team, and helps improve the speed of communication.”

While the speed of text messaging makes things easier in many ways, it also presents a distraction for the athletes — on top of the more traditional distractions that all teenagers face as they’re growing up, said Ward.

“High school kids, their focus tends to be on other things. So we're having to train their brain to being more focused on the sports aspect, cause they have school, they have girls, they have a social life, they have all of these other things vying for their time,” said Ward.

Aside from text communications, one of the most transformed aspects of coaching at the high school level is the use of film and video in training. Because smartphones and video technology are ubiquitous, getting your hands-on footage from a game has never been easier. In addition to game footage, coaches are able to edit film for specific players, which means coaching has never been more individualized than it is today.

“Being able to send them clips with your edits plays a big part in just training their brain to see it from a coach's perspective,” said Ward. “We didn't have video like we have today, so a lot of things we had to rely on the coach for. Today, we have all the different things that can help them think through the game and think about certain movements.”

That ability to document gameplay is also having a major impact on the recruiting process, from high school to college.

In a column for USA Today, Garland Cooper spoke with Nelson Gord, founder of the Illinois Travel Baseball Club and a former collegiate and professional baseball player, about how technology is making the recruiting process more effective. One immediate impact is that technology allows recruiters to scout more high school athletes across a wider pool, which means more athletes can be scouted to play at the college level.

“[I]n just the last three or four years, we had players go to schools that I’d never heard of before, a lot of high academic DIII schools. But these guys never would have connected with them if not for their use of technology. I just don’t have the bandwidth to talk to all those coaches,” said Gord.

MORE FROM EDTECH: Check out how K–12 schools are adopting esports programs.

The Next Frontier for High School Sports’ Integration with Technology

Unlike the NBA or the NCAA, the integration of high school sports and technology is not necessarily evenly distributed because technology investments vary so much at the state and district level. But already, major investments are popping up here and there.

For example, Bingham High School in Utah recently became the first in its state to implement a real-time scoreboard system, according to The Salt Lake Tribune.

As for what Ward, he’s keen on speeding up the footage review process so that it’s closer to real time. When Ward played with the San Antonio Spurs, Gregg Popovich (or, as Ward calls him, Coach Pop) was able to work it so that the team could capture, edit and review gameplay video during halftime. Unfortunately, the high school sports world hasn’t quite caught up to kind of real-time feedback loop.

“We haven't gotten to the point where we can get the video edited quick enough to review it during halftime,” said Ward.

While this particular dream hasn’t yet been realized, Ward can’t help but marvel at where the use of tech in sports is today, especially when he contrasts it with his own time as a high school and college athlete.

“We just didn't have all of the intricacies of everything they have today to be able to go up and hit something on the screen. We had to use clickers and laser pointers, those kinds of things, that was the most technology we had. In today's world, you can edit the film in a lot more ways, and also it's more interactive now,” said Ward.

Given the current pace of innovation, it’s only a matter of time before those real-time, on-the-fly technology tools trickle down from the professional leagues and fall within reach of high school coaches.