As more districts begin to subscribe to the notion that data is the be-all and end-all in education, Mike Charland of Birdville Independent School District advocates for a slightly different approach.

“We do not need to drown people in data and make teachers and principals data scientists,” said Charland, director of enterprise solutions for the Texas school district, which serves more than 23,000 students on 30-plus campuses. Charland presented at the Texas Computer Education Association Convention & Exposition in San Antonio on Wednesday.

The data available to teachers and administrators is too unpredictable and uncontrollable in its number of variables to make effective statistical data analysis possible, Charland noted. What’s more, so much of the data available at the school district level is in silos.

That said, schools should work toward making data available faster, and opening it up for student access.

“They need it, and they are a group we have left out of the equation,” said Charland. He encourages the idea of including students in the planning process, “sitting down and helping them, ‘This is where you are, let us think about what you need to get to the next level.’”

Where Do Schools Go from Here?

“First and foremost, clean up the mess,” Charland said.

To use data effectively, you need to build data connections, he said. Some districts may need to build out their database — helpful if there is too much redundant data when merging disparate databases. 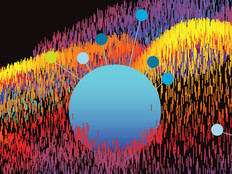